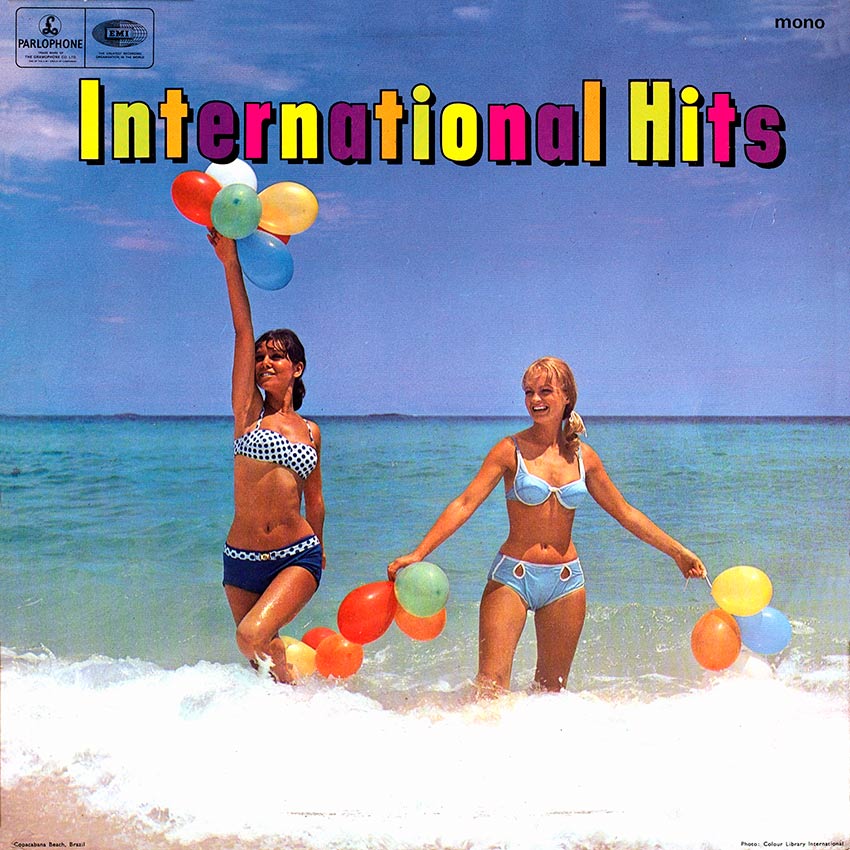 Although England and the United States might be said to dominate the world’s hit parades, their dominance varies from country to country to quite a considerable extent. In some countries it is only the occasional locally produced recording that makes the grade in competing with the big guns of the U.K. and the U.S. In others, more nationalistic or less prone to use English as a second language, for whatever reason, It is the converse and only a few non-local recording artistes achieve success. Whatever the country, whatever the ratio of local to cross-Atlantic big league pop music, there are exciting, interesting artistes to listen to and different record and music sounds to savour. You will find just a few of them on this LP.

The Duo Dinamico are well known, not only in their native Spain but throughout much of Latin America, as film stars as well as singers. Such is their drawing power that a favourite venue for one of their concerts is one of the larger bullrings – because of the large seating capacity. Esos Ojitos Negros is one of a string of hits composed and sung by Ramon Arcusa and Manuel de la Galva. A number one hit in Spain, naturally, and In the top three In both Peru and Chile.

Salvatore Adamo was born in Sicily but has lived in Belgium since he was three years old. He is a songwriter as well as a singer, and La Nuit proves yet again his status as one of the world’s premier International artistes. It reached the top place In the charts in Belgium, France and Switzerland and was in the top twenty in Spain, while a specially recorded Italian version reached number one in Italy.

A quick flip across the Atlantic brings us to Piero Sancho – and an Argentinian man of mystery. His true identity remains a secret closely guarded by his recording company but it is no secret that Letkiss, the hit instrumental dance number featuring the trumpet, is his second hit and became well known in Chile, Equador, Peru and Mexico. In Chile in fact, as well as in Argentina, it was a number one hit.

Rex Gildo’s Wenn Es Sein Muss, Kann Ich Treu Sein was a top ten hit for this German artiste whose success as a singer followed on a highly successful film career, while Gitte Haenning followed the success of the Eurovision Song Contest’s winning entry from Luxembourg last year by recording a Danish version of Poupee De Cir Poupee De Son; Lille Dukke, as it was called, reached number nine in Den-mark, while it was number one in Sweden for several weeks. Gitte is a very popular artiste in Germany as well as in Scandinavia and she makes a great job of the catchy little song. Billy Thorpe and the Aztecs’ Over The Rainbow provides the only English language recording on this LP. There had to be a representative from the Commonwealth and after several number one hits in his native Australia, with this particular item repeating the pattern of success, Billy Thorpe seemed like a worthy representative. This is, incidentally, quite an inter-national group, for not only is at least one of the Aztecs a New Zealander, but Billy himself only arrived in Australia from England when he was ten.

From Australasia, back to South America, but this time to Brazil where last year Altemar Dutra’s O Trovador held the number one spot for no less than four months. Since his first album release in 1963 Altemar has become the singing idol of Brazil with every disc making the top three.

Holland’s Imca Marina with Santa Domingo, a Western flavoured song that was a hit in other countries in Europe by other singers, but which was taken to number six in the Dutch hit parade by this talented girl singer who is herself well liked throughout Europe.

The same can be said for Italy’s Pino Donaggio who had a number one hit in his own country with lo Che Non Vivo (Senza Te), a recording which also got to number six In Argentina and to number two In both Spain and Brazil. A really beautiful song this!

The internationally popular Richard Anthony Is the representative of La Belle France with Je Me Suis Souvent Demands which only just missed being a number one hit for him. This was just one more of a whole string of successes but it certainly confirms M. Anthony’s standing as an artiste of more than just pop calibre.

Venezuela’s representative is the simply named Tulio Enrique Leon, whose relaxed but catchy Latin organ-playing took him to number one in Peru as well as in his native landla Pollera Amarilla is perhaps a little strange at first hearing, but the tune and the song both grow on one to quite an alarming extent. Finally, a somewhat melancholy number one hit from Austria from a group called Die Bambis, the song itself being called Melancholie. Unusual, but very effective, this raised quite considerable interest on the continent of Europe at the time of release, and deservedly so.

It is perhaps a slightly introspective sounding way to finish this LP, but, as with the other recordings here, we hope that it will whet your appetite to hear more of these artistes, and indeed more overseas music generally. There is plenty of good music around, and from many a country. And incidentally, if you wonder what the front cover design has got to do with the contents of this record, we simply thought that it would be attractive. If the sand, the sea and the sunshine remind you also of your trips abroad in search of the sun, even if at the moment these trips are only vague ideas for the future, then that is an added advantage. R. S.