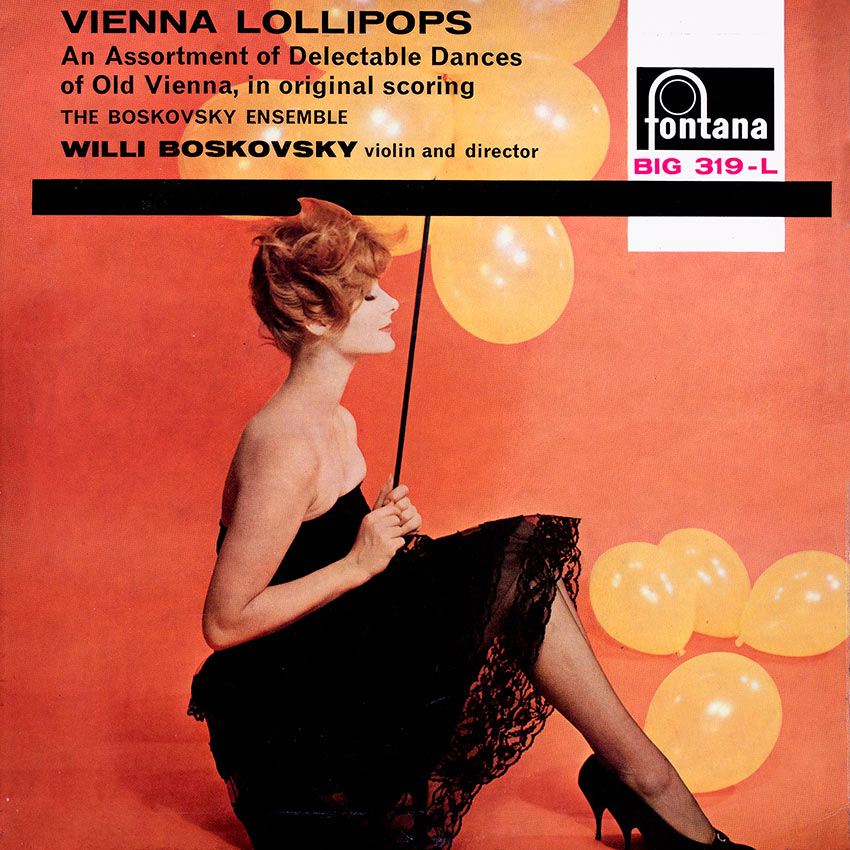 An assortment of delectable dances of Old Vienna, in original scoring.

No dance music rivals that of old Vienna in combining the most ravishing, open-hearted popular appeal with the artistry and permanence of the finest musical craft. And no other dance music is so much of a performer’s as well as composer’s show. In the tradition of the history-making Vienna waltz composers who – in their small bands with violin bow in hand, here Willi Boskovsky, the celebrated violin soloist and leader of the Vienna Philharmonic Orchestra and a group of first desk men of this famous orchestra, address themselves nostalgically and affectionately to a bouquet of exquisite, tender and boisterous old Vienna dance music. Included are great classic composers like Haydn and Schubert to whom dances represented an occasional music and relaxation from more serious efforts; inspired specialists in the dance like Lawler and the elder Strauss; and forgotten composers of remarkable little pieces like Mayer and Stelzmuller, all revealing their musical kinship in this rapturous recreation of the winsome Viennese dance spirit in its lovely flowering.

Vienna began to make its reputation as the city of gaiety and dance at the end of the 18th century, when the nobility was losing its aura of divine status and the middle class was beginning to imitate its way of life and joie de vivre. This was also the period of the classic art of Haydn, Mozart, Beethoven and Schubert. Popular dance music with its folk origins filtered into art music, and art music, profiting from this source of inexhaustible strength, in turn purified and idealized dance music. Giants like Haydn, Mozart, Beethoven and Schubert, their feet solidly planted in real life, could soar to As greatest heights of expression and yet never lose the popular touch. They relished the opportunity of writing dame music, and their disciples proved to be extremely well-taught in the art.

By 1815, with the end of the Napoleonic wars, the demand for dance music reached fantastic proportions. The Council of Vienna while shrewdly, behind the seen., trying to restore a conservative “order” throughout Europe, had the atmosphere of an uninterrupted ball. The famous Apollo Halls for which J. N. Hummel and others wrote dances every year, had As enormous halls, 44 rooms, four large greenhouses and 13 kitchens. A fabulous blossoming of dance music took place between 1815 and 1848. In the arena that opened up for new talent, resources were disclosed among the common people. Writers of dance tunes and fiddler-composers like Pamer, Faistenberger, Pfister, Wilde and others paved the way for the Strausses and Lanners, who likewise came up from below, and whose achievement to win critical respect for what had previously been considered the lowly art of writing dances. And their successors established the connection to art without any further question. Thus today we have complete editions of our Waltz Kings, although in this as in other musical areas, the “best sellers” are played excessively and many pearls remain to be rediscovered.

Rarely was the music of Lanher and Strauss, in their lifetime, played by a full orchestra. The instrumental group was most often a small one. Similarly, Mozart’s and Haydn’s dances were publish., aside from a piano version, in arrangement for two violins and a double bass, with wind instruments to be added as needed. These small bands achieve astonishingly rich sonorities. Aside from being a tribute to the fine taste of the settings, the appeal this music has in small band form is also a testament to the composer’s rich melodic invention. Like their great prototypes, Lanner and Strauss were never at a loss for inspiration; indeed, they seemed to be wasteful of thematic material. In this “chamber music” of dance, as in more exalted chamber music forms, it is through the small instrumental framework that the master is made manifest.

The programme starts with a typical witty and sparkling dance by Johann Strauss the Elder (180449), the Girana Galopp, Op. 108. It hints at what might have been his own fiery and dashing violin style. The tune he uses is a Gypsy melody that Vienna at the time knew from a ballet “Gitana”, in which the famous Fanny Elssler danced. An enchanting novelty follows; the languorous, Schubertian Schnollerrans by the almost unknown Johann Mayer Mayer was one of the crop of composers (others being Stelzmilller, who is also represented on this programme, Schmutzer, Haberlandtner and Debusy) who appeared in Vienna at about the mid century, and wrote dance music to be listened to rather than for dancing. People would nod their head, tap their feet and sway their bodies to the changing rhythms. A new form was born, as we see here; a sustained cantilena followed by a faster second section.

In his youth, the peasant-born Joseph Haydn (1732-1809) wrote dances of a robust folk quality. In his ripe old age, he wrote more courtly dances, but the earthy folk style remained, and motifs of it can be heard in the opening and closing movements of some of his most exalted symphonies and string quartets. An example of his love for the rough-hewn folk style may be found in his Zingarese, or Hungarian Gypsy dances from his native Burgenland. With their skilful recreation of Oriental colour, their strange scales and harmonies, they prove to us how varied were the influences that met and fertilized one another in Imperial Vienna.

The noblest master of the Viennese dance was, of course, Franz Schubert (1797-1828). The occasion for which he would invent these sublime yet intimate and unpretentious waltzzes and kindkr was often the “Schubertiad”, the frolicking evening spent with his friends, with its fiery discussions, earnest music making, and at the end, gay dancing. The group of Schubert dances presented here provide a cross-section of his rich and contrasting dance moods. They move from simple, genial high spirits and bacchantic jubilation to intimate and deeply poignant feelings, combining “laughing and weeping”, to quote the title of one of his much-cherished songs. We now go back to the elder Strauss, whose Annen Polka, Op. 137, titled in honour of Vienna’s traditional Feast of St. Anne, is the most brilliant and inventive of his treatments of the polka form. The polka was born in Bohemia early in the century. In 1837 the first polka was printed, in Prague. The dance became the rage in Europe, and was especially popular at the Vienna Mardi Gras of 1842, which is the year Strauss wrote this work. Joseph Lanner’s (1803-43) Abendsterne, Op. 180 or “Evening Stars”, which follows, is the waltz masterpiece of his late years. It exhibits Lanner’s sweet, gentle and lovely lyricism, and tasteful harmonies.

Even in the waltz, the elder Strauss was a composer of not only melodic beauty but Aso a fine wit and love for tricky rhythmic patterns, as we hear in the delightful Hofball-Tonne, Op. 51 or “Court Ball Dances”. They were composed in’ 1832 and adorned a splendid occasion, a marriage in the imperial family. The setting here, for three violins and double bass, with soaring violin solos, gives us something of the effect that must have been made when Strauss himself I. a band with violin in hand. Vinunz Stelsmaller-Tani’ is in the same vein as the dance by Mayer, above. It is followed by the light-hearted and frothy Seufzer Galopp, Op. 9 or “Sighing galop”, which is one of the elder Strauss’ early works, composed in 1828. And again there follows an engaging contrast to the style of the elder Strauss’ partner and, later competitor, Lanner. For more than Strauss, Lanner prized not only the waltz and galop but also the gentler, folk-style predecessor of the waltz, the kindle, We hear how perfectly Lanner could capture the gentle fragrance of this music in his first published work, the Neue Wiener or “New Vienna” kindkr, Op. 1.

Schubert’s Ecossaisen, Op. 49, date from about 1822. The ecossaise, a dance of Scottish origin in 3/4 time, developed in Europe along the lines of a contredanse in either double or triple time, and in the classical period throngs of people happily hopped to its measures. Beethoven wrote such “country dances” and put one of them in the finale of his “Eroica” Symphony. Schubert’s also represent, as these examples show, an artistically stylized dance form.

Haydn’s Katherinen-Tanze are a selection from a series of twelve minuets that he wrote in 1792 for a grand ball in the Imperial and Royal Redoutensaal, and soon thereafter published in piano arrangement. A lively copyist industry soon got hold of them and provided arrangements for even the smallest bands, as the market required. The sonorities such arrangements are capable of are illustrated by the present performance, which uses the string group typical of old Vienna practise reinforced by two woodwinds and two brass.

Notes from the German of Dr. Alexander Weinman

Willi Boskovsky, violin soloist and director of the Ensemble, is the leader of the Vienna Philharmonic Orchestra and is also renowned for the exquisite musicianship of his sonata recitals and chamber music performances. The other members of the ensemble are first desk men of the Vienna Philharmonic Orchestra. They include Wilhelm Hubner, second violin; Rudolf Streng, third violin and viola; Otto Ruhm, double-bass; Josef Niedermayr, flute; Rudolf Jettel, clarinet; Otto Nitsch and Roland Berger, horns. Karl Scheit, who plays in the works by Mayer and Stelzmuller, is one of the most renowned scholars and masters of the classical guitar in Europe, and is Professor at the Vienna Academy of Music. Alois Pistor plays the guitar in Haydn\’s Zingarese.