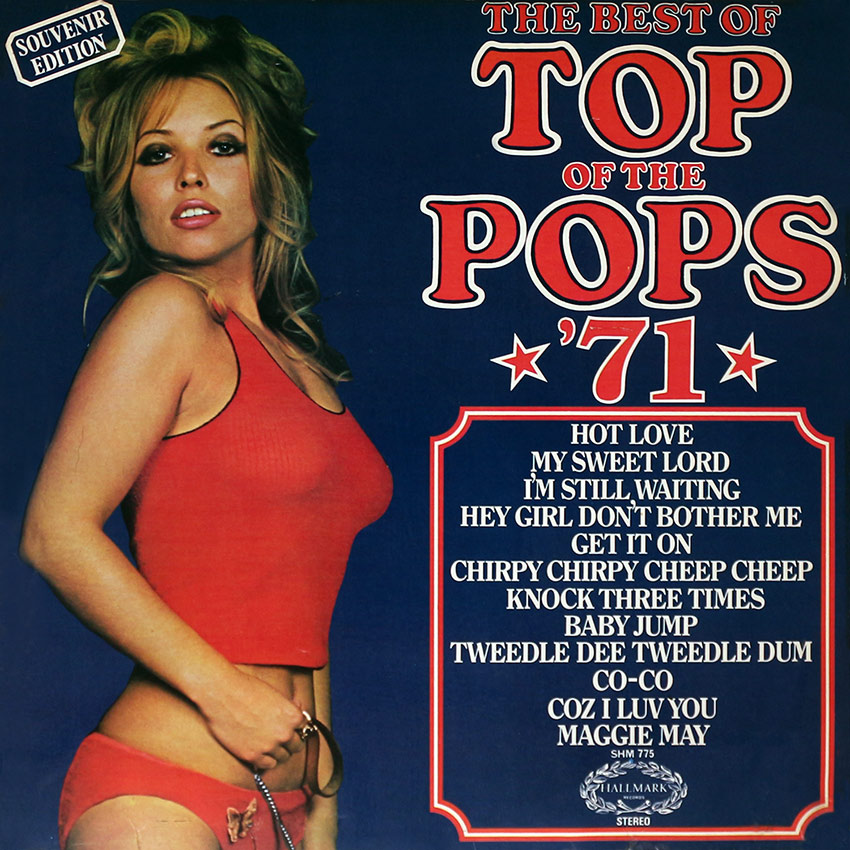 Top of the Pops series splashed the cash with this release featuring as it does a gatefold design with a mild “domination” theme to titillate. the poor guy at the end of the chain appears to have previously caught his foot in a car door or similar judging by the oddly deformed toe arrangement. The cover model is Suzy Shaw, who appeared on other covers in this series including Top of the Pops volumes 28, 37, 47, 49 and 69, as well as Best of 1972.

Let us explain what our Hallmark “Top Of The Pops” L.P.s are all about. Just over three short years ago we at Pickwick International decided that what the fans wanted was a top quality, low priced album covering twelve of the best hits of the day. Only we wouldn’t be using the original artistes or groups.We would gather together the cream of the session musicians and try to make even better versions of the current hit tunes than those recorded by the original artistes.

So in June 1968 we issued our original cover version L.P. It was a hit with pop enthusiasts not only in Britain but also in Europe and many other parts of the world. This encouraged us to issue another version, which followed the success of the first.

Since then, about every two months, we have issued these great albums – and, such was the success of every issue, we were encouraged to release each December a composite album called The Best of Top Of The Pops containing the cream of the tracks from Top Of The Pops albums during the year.

This, then, is The Best of Top Of The Pops ’71, and we feel it MUST be a runaway bestseller. Do you know why we think this? First of all, our Top Of The Pops issue of May, 1971, went to No. 1. in the Record Retailer L.P. chart for the first time in our history. What’s more, four of the last six issues have topped the Chart.

This achievement is quite unparalleled in the history of Budget Records – and we’re very proud of it. This album contains the greatest hits we have recorded in 1971, including rocketing hits from our four No. 1 best selling Top Of The Pops.

That’s why we think you’re going to enjoy every second of this record: and that’s why we sincerely believe we have a runaway best seller.

There was a time when you had to search pretty hard to find a British name in any collection of the year’s top hit records. But not any more, for as the music scene has changed, so, too, has the shift in musical talent swung heavily to the British and European side of the Atlantic.The Best of “Top Of The Pops” shows just how strong the influence has been because the year kicked off to a great start with the emergence into the solo limelight of George Harrison. The mantle of the Beatles firmly cast aside he would now watch My Sweet Lord soar to the top of charts all over the world. Likewise Rod Stewart, a talent that had been long waiting for a chance to show that the early predictions for success would be justified sooner or later, shot to Number One spot in the British and American charts at almost the same time with Maggie May. Appropriately enough his record company awarded him a Gold, a Silver and even a Platinum disc! Another much touted talent that found its way into the maze of hit parade success in ’71 was T. Rex and two of their chart stormers Hot Love and Get It On occupy a much deserved place in this collection.

As T. Rex found hit to follow hit so, too, did a Scottish act Middle Of The Road who followed up Chirpy-Chirpy, Cheep-Cheep with Tweedle-Dee Tweedle-Dum and fellow Scots The Sweet saw Co-Co occupy more than fourteen weeks in the charts. Then there’s Mungo Jerry who couldn’t quite emulate the phenomenal world-wide success of In The Summertime, but who made it certain that the hit parade would register Baby Jump in fine style. And it did because the song was a Number One hit in Britain.

But of course the Americans can never be left out of any hit parade and Diana Ross proved that she could come up with a spectacular Number One hit like I’m still waiting, Dawn the group formed by former solo hit maker Tony Orlando also managed to maintain a run of success, notably with Knock Three Times a record that brought them to this country for a successful tour. And of course there were the genuine surprise hits, and oldie called Hey Girl, Don’t Bother Me gave The Tams a Number One hit and the former skinhead group Slade saw their Coz I Luv You score four weeks in the Number One slot. All in all, quite a year for hits and what’s more they’re all worth playing again and again.