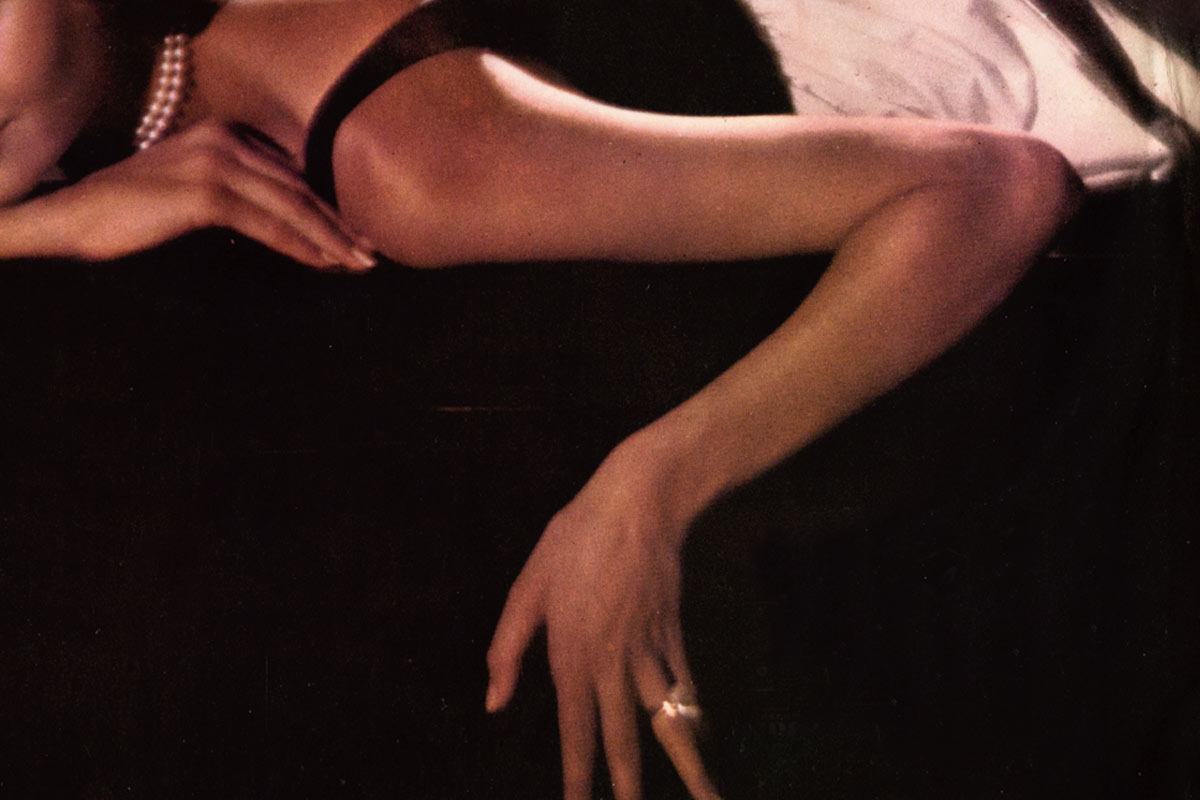 From time to time it feels like the right time to assess the best covers from the collection of covers at Cover Heaven. This time around we’re looking at covers from the fifties and attempting to rank the top five based on nothing but aesthetic pleasure, the greatest representation of the fifties decade and our own predilections. You might agree with our choices or you might think we have it all wrong, either way we’d love to hear what you think. So without further ado let’s get ranking!

Bringing up the rear at number 5 is this daring (for the time) cover from Mohammed El-Bakker. Featuring a bare-breasted dusky beauty this came at a time when breasts were acceptable so long as they weren’t attached to an obviously Caucasian woman.

The old stereotype of dusky maiden performing for the benefit of men is present and correct, she’s bare-breasted and showing every sign of being happy about it even while we know she’s the exploited one here. What is the man at her feet doing? Promising more to the crowd? Asking for requests? Money? Who knows. We do know this is “a study in stereophonic high fidelity sound” so we’re definitely being asked to treat it seriously. If only we could! Instead we’ll simply reflect on how daring some aspects of the fifties were when it comes to record covers and celebrate it’s existence as a reminder.

There’s a lot to like about this record cover from 1959. Starting with the beautiful typeface of the album title which lends the whole design a seductive air that complements the photo of the attractive lady. The lady herself is dressed “middle-eastern” style or at least in a style that designers at the time thought represented that exotic area.

Her top half is alluringly under-covered in a way that wouldn’t fall foul of any censorious busybodies at EMI, the home of the Parlophone label (later to become very famous for being the Beatles’ label). Her gaze into the camera adds a different reaction to the viewer from profiles that cannot convey the same sense of connection. The colours are velvety and tasteful while the overall lighting is expertly arranged. A worthy entry in our top five fifties covers. But what do you think?

The attractive woman on this cover is very much covered up but as is often the case, less is sometimes more. Beautifully posed, skillfully lit and photographed this cover epitomises the nineteen fifties in a way others struggle to emulate.

Lou Busch (who also released albums under the moniker of Joe “Fingers” Carr) was by no means an unattractive guy but he probably knew the benefit of keeping well away from his album photo shoots in favour of leaving the heavy lifting of promotion to more appealing visions such as this. Nevertheless the way the cover model drapes her fingers lightly over Lou’s ivories tells us all we need to know about Lou (Joe “Fingers” Carr) Busch and his penchant for a pretty lady. A year later Lou released this album cover with a more playful theme.

Classical recordings were big business in the fifties not least because, being quite expensive to buy, they appealed to the wealthy who could afford half-way decent hifi equipment at home. To shift records off the shelves more quickly many releases featured racy, exotic, sexy and classy covers. Always tasteful of course so the record didn’t look vulgar in the drawing room.

This cover plays into the exotic theme (nowadays might likely be called a “trope”) of femme fatale ready to ensnare or hypnotise unsuspecting males. In this example the beautiful woman is lying on the floor, presumably waiting patiently and attentively for her man to come and pull the curtains away (snigger). The beauty looks down not at us but at the whimsy of what she wishes to happen. Or something like that. In any event it’s a fabulous cover complete with perfectly designed and arranged typography and makes a worthy runner-up in our top 5 fifties covers in our humble opinion.

# 1 – Morton Gould and His Orchestra – Blues in the Night

Okay our number one in the top fifties covers in Cover Heaven is this wonderful example from 1957.

A deceptively simple cover at first sight but one that yields more pleasure the longer one lingers over it. The colour palette is gorgeous featuring a range of blues but with a punctuation of red in the model’s hair, lips and record title. Her direct to camera look fixes the viewer to her eyes making it difficult to escape. The out of focus background hints at where she is – a late-night club? The photographer is Ben Somoroff who began his career as a painter and this shows in his unique style. His images have often become notable works of art and we feel that this example encapsulates both his fabulous talent as well as the look that we come to associate with the fifties, at least in album cover designs, and is therefore a worthy top place winner in our fifties top five..

Listen to the title track here:

What do you think about our Top Five fifties covers? Have a look at all the fifties record covers we have and see if you can find worthier contenders. Let us know what you think below.

Look out for the top five sixties covers coming soon!