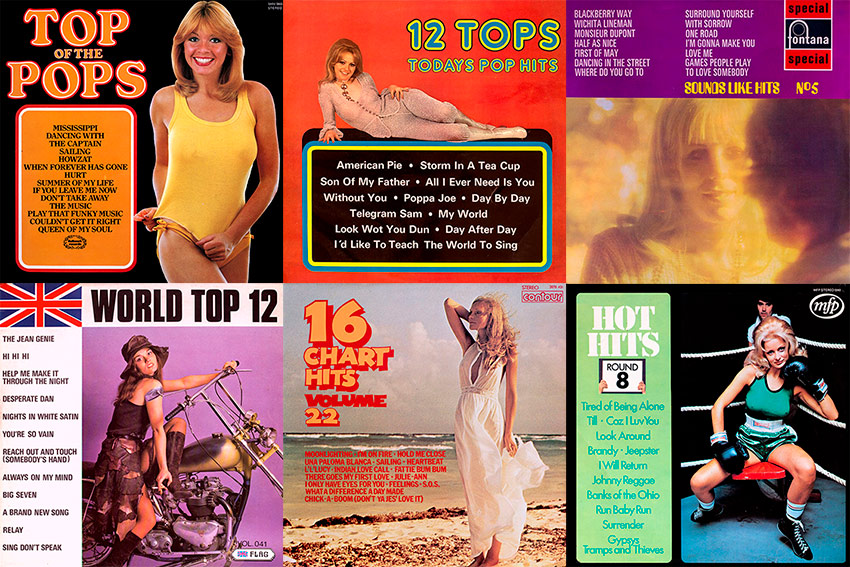 The record covers featured in the Cover Heaven archives come from a diverse range of genres, styles and artists but among them you’ll find a more than fair representation of records from what might be labelled the “budget” end of the spectrum. These were usually records released by record labels – some well-known, some not so – featuring cover versions of contemporary hits made by session musicians of varying abilities from the utterly lame to the near-perfect copyists.

Of the well-known labels involved in this genre perhaps Music For Pleasure and Hallmark (home of the “Top of the Pops” series) stand out but of the lesser known labels there are many. They included Deacon Records; responsible for the “Pick of the Pops” series as well as many “tribute” type albums that focussed on one artist, Boulevard Records; who made many a “Sounds Like…” album as well as various Tijuana related releases – all with covers featuring attractive women, Windmill Records; famous for the “Parade of Pops” series – another cover versions genre, Stereo Gold Award and Marble Arch records who were one of the first to release hits of the day albums recorded by session musicians (who often included then unknown but now global superstars like Elton John).
Titles followed a predictable style ranging from the aforementioned Top of the Pops, via Pick of the Pops, 16 Chart Hits, 12 Tops, Chartbusters, World of Hits, Parade of Pops, Super Hits all the way to Hit Parade Special.

From forgotten to desired

At the time budget albums like these were somewhat inconsequential, garnering no great love among the wider record buying public but finding their niche nevertheless. Niches included satisfying those with limited budgets who couldn’t afford to buy up all of their favourite hits of the day so contented themselves with passable versions. Let’s not also forget that for many a young boy with pocket money to spare these albums were the only route into having a pretty and/or sexy woman staring back at them!

Now the outlook is very different for these formerly budget LPs and some change hands for significant sums on the auction sites such as eBay with collectors determined to snap up every volume of every set to form a complete collection. There are even those who want to listen to the records within the sleeves though whether this is out of a sense of nostalgia or masochism is open to debate. In truth some of the production values were quite high as evidenced with this rendition of Pink Floyd’s “Another Brick in the Wall” from 1980’s “Parade of Pops”:

On the other hand there were also cringe-inducing attempts like this:

For those interested beyond the pretty covers there are websites that catalogue these records in fine detail. If you’re at all interested in delving further into this fascinating world then check out these excellent sites:

Top of the Pops portal http://topofthepopslps.weebly.com/

Here at Cover Heaven you can view a selection of these album covers, all in high quality, from the sixties to the eighties and more are being added all the time. Check back soon to see more!