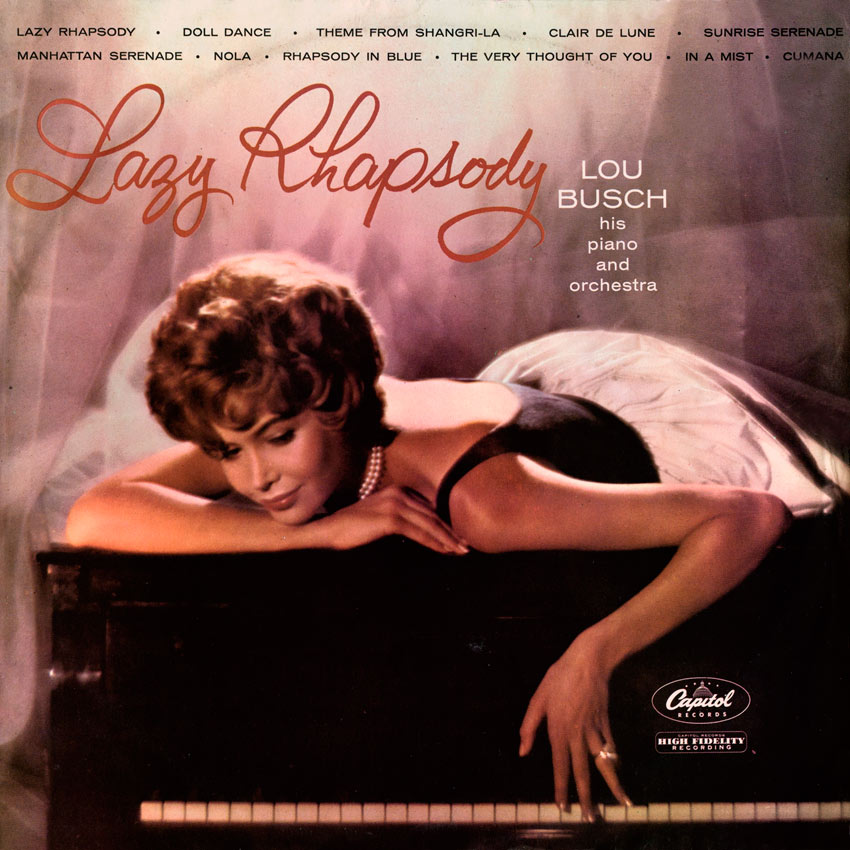 A Grand piano, a full orchestra, and the imaginative talent of Lou Busch create languorous rhapsodies on the themes most treasured, and requested, of any popular musician. The affection and respect Lou Busch holds for these melodies is best stated by the expression he lends to them, both in his articulate piano stylings and romantic orchestrations. And in this album he plays the songs with no gimmicks, no gadgets, and no grand-standing. Played as Lou plays them – with finesse and imagination and melodic emphasis – the tunes have never sounded newer, more listenable, or more rhapsodic.

Lou Busch has played the piano all his life. His training in the rhapsodic style began with the Hal Kemp band, continued with Freddy Martin’s socially styled orchestra. Now, a star in his own right, he’s won top rating as arranger and conductor with records like “Zambesi!’ But it’s as pianist that Lou has learned first-hand what music people want to hear most and how they like it played.

This album is made up of the numbers most often requested of Lou Busch when he’s at the piano. Lou understands their popularity, and makes each in its own way a very special musical occasion.

Lou, in fact, has been responsible for several of these tunes reaching the “hit” category. He created the original dance arrangement of Shangri-la for Freddy Martin and recorded The Very Thought of You with Ray Noble. “Many of these songs,” says Lou, “are dedicated to and identified with the greatest dance bonds in the land. Sunrise Serenade, of course, could belong to no one but Frankie Carle as could Cumana only to Barclay Allen. In a Mist was Bix Biederbecke’s creation. Bix was famous as a trumpeter, but was also an outstanding mood pianist!’

Lou Busch knows these songs just as he knows the pianists with whom they are identified. In a very real sense this album is dedicated to The Pianist, for in it are songs that belong to the distinguished tradition of popular keyboard masters. Lou Busch is certainly an illustrious member of that tradition.