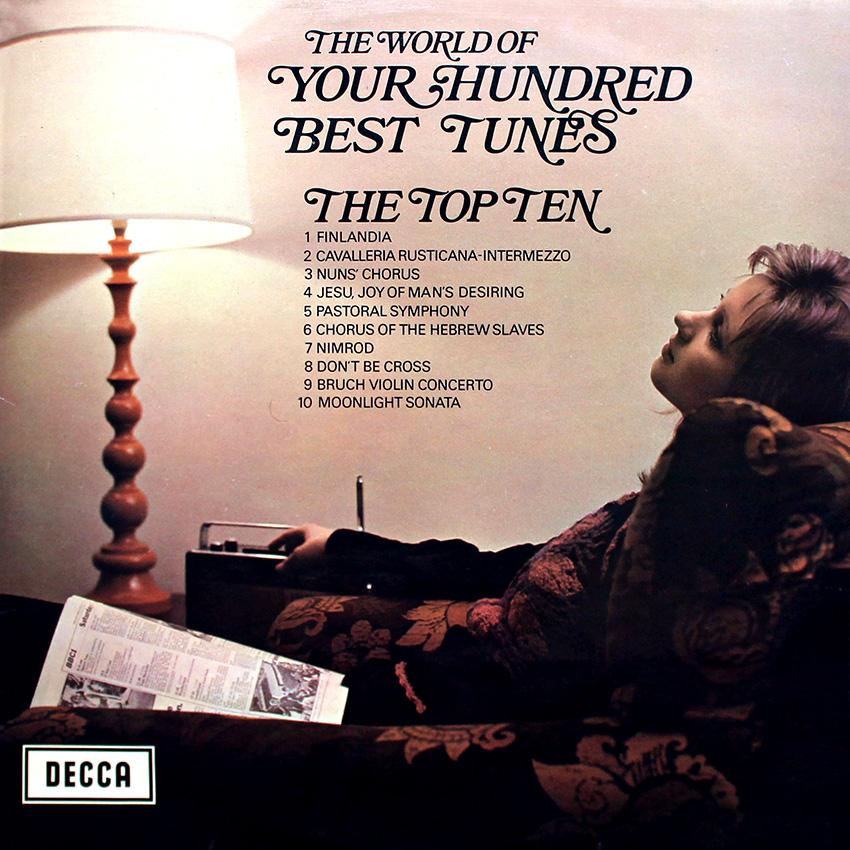 The ten items on this record are so well known that they require no commendation from me. They are the chosen favourites of my large audience on BBC Radio 2 on Sunday nights These are the tunes that occupied the first ten places in a recent nationwide poll, when listeners to my programme were asked to nominate their hundred best tunes. The response was quite remarkable, and the many thousands of letters clearly show what the mass of music lovers were ready to accept and appreciate. As one listener put it “Music that speaks to us in straightforward terms”. The selection presented here affirms that impression, and gives us a choice of music that cannot fail to delight. You will hear music as varied in mood and character as is possible to find on any one record.

Who is not moved by Sibelius’s tone-poem – Finland. As stirring a piece of nationalistic music as was ever written. Or who can resist the joyful outburst of the finale of Beethoven’s – Pastoral-Symphony There is no need for me to attest to the popularity of the enchanting song. – Sei nicht bos – “Don’t be cross”, from Zeller’s operetta, or the famous chorus from Verdi’s “Nabucco”. Nor need I remind you of the heartfelt melodies of the Violin Concerto in G minor by Bruch. These and the others in the list that make up the top ten of – Your Hundred Best Tunes are familiar to all who listen to what might be termed “more serious music”.

Here is a chance to hear these favourites in your own time, and as often as you wish. And always, I am sure, with the greatest pleasure. …

Sibelius: Finlandia
This famous tone poem was original, the finale of an earlier orchestral suite that Sibelius composed in 1899 and though for a time performances of “Finlandia” were prohibited by the Imperialist authorities, it nevertheless came to represent the defiance of the Finnish nation struggling for independence from Czarist Russia It was generally assumed that some of the themes In “Fintandia” had been based on actual folk melodies, but Sibelius emphatically denied this.
Johann Strauss: Casanova – Nuns’ Chorus. When the English version of “Casanova” was presented at the London Coliseum in 1932, with book and lyrics by Harry Graham, it was described as a musical play of Adventure and Love. The score was arranged by Ralph Benatzky from Johann Strauss’s music. But the only reminder we have of it today is The Nuns’ Chorus, which is still as popular as it was almost forty years ago.
Mascagni: Cavalloria Rusticana – Intermezzo. This Intermezzo is perhaps the most famous piece in the opera. It follows a dramatic encounter between Santuzza and Allio who rush from the scene, leaving an empty stage. In this tense and hushed stratosphere, the orchestra softly begins the Intermezzo.
Zeller : Der Oborsteiger – Don’t be cross. A song about a miller\’s daughter who is wooed by a fisherman. Thinking that she can improve her status in life, she rejects him, saying “Don’t be cross, it cannot be”. When later, having experienced the outside world and returned disillusioned, she asks the fisherman to comfort her, only to be paid back in her own coin.
Beethoven Symphony No. 6, “Pastoral” Final movement. It was Beethoven himself who subtitled his Symphony No 6 in F major. “The Pastoral: Recollections of life in the country”. The last of the five movements he called A Shepherd’s Song of happy and thankful feelings after the storm. A hymn of gratitude, as shepherds gather their scattered flocks, and the sky is again serene.
Beethoven: Piano Sonata No.14, “Moonlight”. The name “Moonlight” by which the C sharp minor Sonata is known, was not Beethoven’s. Legend has it that a critic of the time had said that to him, the music suggested Lake Lucerne in the moonlight. Presumably he was only referring to the first movement, Adagio. But though none of the numerous explanations are to be taken seriously, it may be that the nickname has contributed to this sonata’s popularity with the general public.
Verdi: Nabucco -Chorus of the Hebrew Slaves. One of Verdi’s most celebrated choruses, this fervent plea by the Hebrew slaves held in bondage never fails to impress its listeners. On the Banks of the Euphrates, by the Waters of Babylon, they sing “Va pensiero sull ‘ali dorati – “Go, our thoughts on golden wings”.
Bruch: Violin Concerto No.1 in G minor.Through this violin concerto alone, Max Bruch’s reputation will remain secure. It is a standard work in the violinist’s repertoire. The warm expressive melodies of the Adagio have led some to regard this movement as one of the most rewarding pieces of music ever written for the violin. Indeed, its main theme has been called “a melodic glory of the nineteenth century’.
Bach: Cantata No.147: Jesu Joy. No one section of any of Bach’s Church Cantatas is better known than “Jesu, Joy of man’s desiring”, the final chorale of Cantata No 147. This tune is familiar too, in transcriptions for the keyboard.
Elgar: Enigma Variations – Nimrod. In discussing the Enigma Variations, Elgar once said that in his music he sketched the idiosyncrasies of thirteen of his friends The ninth sketch, or variation, refers to Elgar’s friend A. J. Jaeger. “Jaeger” is German for “hunter”. And the Bible says Nimrod was a mighty hunter.