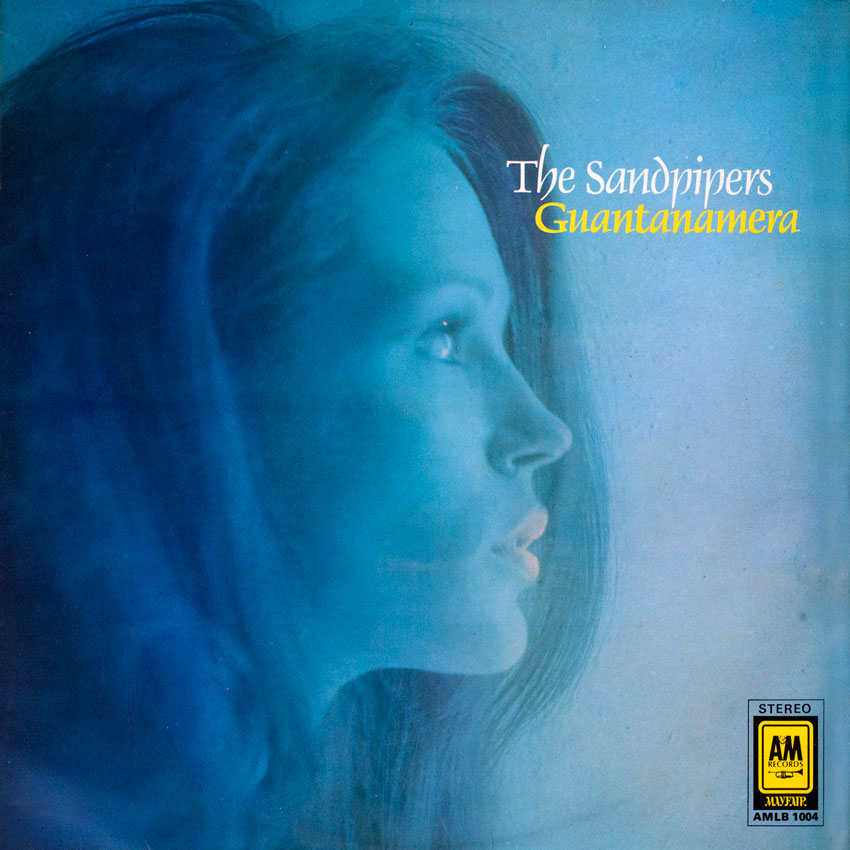 There’s no doubt about it. The Sandpipers are one of the finest singing groups in the world. The three ex-Mitchell Boys – all aged 26 – who collectively call themselves the Sandpipers, make records which have a lasting appeal to the more discerning kind of record buyer – the type who shells out good money for something he knows will not pall inside a few weeks. It is significant perhaps to note that the solid popularity of the Sandpipers isn’t confined to one age group. Good music lovers of all ages readily snap up their records and, if they are lucky, make haste to take in one or more of their in-person appearances.

It’s always a pleasure to welcome the release of yet another Sandpipers album. For one thing, it guarantees the listener a musicianly, articulate performance, generously spiced with impeccable taste and utter professionalism. You can’t always say that about some of the other big name performers.

‘GUANTANAMERA’ is yet another example of the trio’s pre-eminence amongst the leading vocal groups in the densely populated jungle of the pop music world. It demonstrates many facets of the Sandpipers’ musical eloquence. For one thing, it shows clearly that like Paul Simon & Art Garfunkel, they have elevated the art of combining musical simplicity to fine musicianship to a level it doesn’t often attain.

Used loosely, and in the wrong way, the term ‘simplicity’ conjures up an instant mental – and aural – picture of three musical morons. Nothing could be further from the truth! But using the expression in the most complimentary sense, it means simply that the Sandpipers deliberately eschew the involved, the raucous and the unnecessary. Instead, they wisely concentrate on the not-always-easy art of singing well, and in a way that communicates naturally and easily to their ever-growing audiences throughout the record buying.

As this album demonstrates too, Mike Piano, Jim Brady and Richard Shoff are never afraid to select material that is as varied as it is interesting. The result is an ultra pleasant melange of good music, with a definite international flavour, and delivered – as always – with a finesse and ease that is wholly commendable.

The song ‘GUANTANAMERA’ has received wide coverage from a variety of artists in the field of recording, but for many people it will be forever associated with the Sandpipers. Whichever way you look at it, theirs is a treatment which can be safely termed “definitive”.

The Beatles’ “THE THINGS WE SAID TODAY” sounds absolutely tailor-made for the Sandpipers.

Anyone who remembers the film “Hans Christian Anderson”, must surely recall Danny Kaye, in the title role, singing Frank Loesser’s “Inch Worm” in most charming fashion. The Sandpipers obviously did and, with the assistance of a high-voiced chanteuse, rescue this neglected little number from obscurity. The result is quite delightful.

Composer Georges Bizet is saluted in composer/arranger Nick de Caro’s salute to “CARMEN”. Whilst the Sandpipers warble sweet things about the obviously alluring young lady, co-arrangers De Caro and Mort Garson utilise the “Habanera” from Bizet’s “Carmen”; the operatic excerpt is delineated most effectively by a harpsichord and acts as an ingenious counter-melody to what the Sandpipers are singing.

A word here about the arrangers. Nick de Caro and Mort Garson provide an ideal setting for the singers; one that is always listenable, yet never instrusive.

Nick De Caro alone arranges “INCH WORM”, “GLASS” and Jimmie Rodgers’ sad little song “IT’S OVER”, the rest of the tracks were scored by De Caro and Mort Garson, in tandem. The Sandpipers could not have asked for more instrumental sympathy from their accompanists.

The Sandpipers – though they weren’t then known under that banner – first got together when Seattle-born Richard Shoff persuaded Los Angeles-born Jim Brady and Mike Piano, from Rochester New York, to form a vocal trio. The boys taught themselves to play instruments – Mike, for instance, is a piano player – but for several years their efforts went unnoticed. Then, in 1964, when they were known as “The Grads”, they played their first gig in Palm Spring, Florida. Later came many offers to play in many of the plush U.S. Nightspots – Harrah’s, both in the Lake Tahoe district of California and Reno, and the Sands in Las Vegas.

In 1965 they received a call from A&M chief, Herb Alpert, asking them to audition for Tommy Li Puma, a talented and knowledgeable record producer. Recalls Richard Shoff of the incident “We went to Herb Alpert’s office and did our whole show for him’ – rock, pretty songs, a cappella things. He was impressed but he said “Well boys, right now I’ve got only myself and I’m interested in pushing myself. Come back in six months when probably I’ll be ready to take on some new acts”. We thought it was the ‘Don’t call us, we’ll call you’ type of thing. But we went back and he signed us up”.

After hearing an album by folk singer Pete Seeger recorded live at Carnegie Hall, the Grads were most impressed by one of the songs he featured in this programme. It was a Cuban song called ‘Guantanamera’. The group featured the number of their second single release (the first hadn’t amounted to much from the sales standpoint). Just before its release, they changed their name to…. the Sandpipers.

The change of name, the song and the Sandpipers performance did the trick. They were off on the dizzy road to fame and fortune. To other best-selling records. To highly-acclaimed concert and club appearances.

The three talented young men, who as kids sang together in the Mitchell Boys Choir, Los Angeles, have continued to combine their impressive musical talents to the best advantage. They will surely continue to do so for than, many Years to come. And for us – that’s good news.