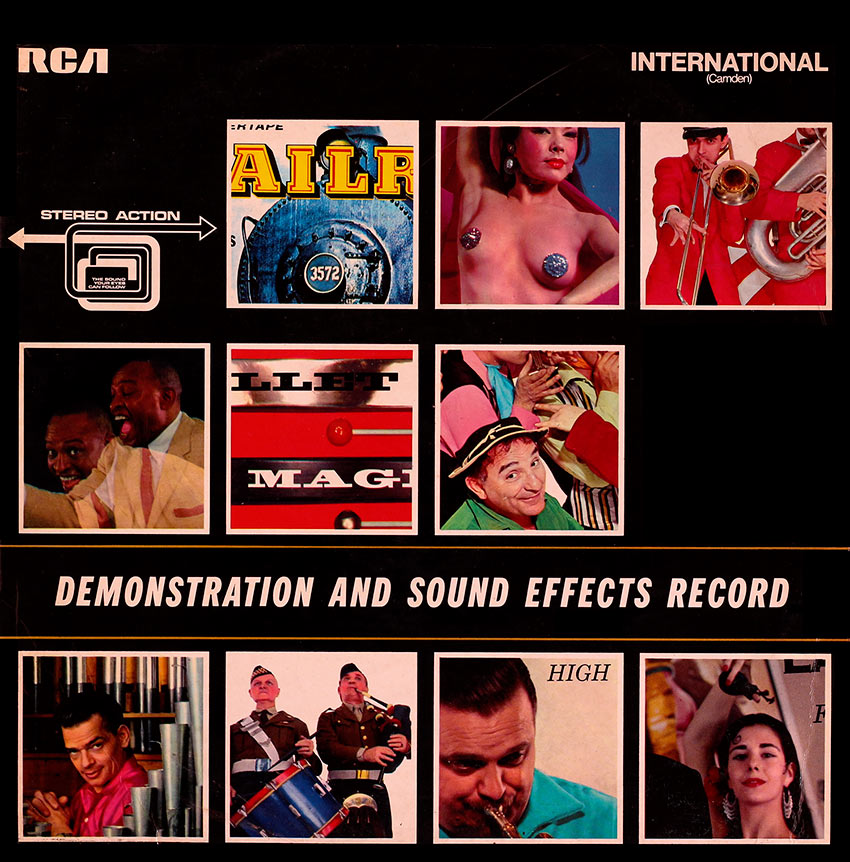 Audio Fidelity Records, originator of the world’s first stereophonic phonograph records (November, 1957), now proudly presents its unrivaled conception of a demonstration record for both the high fidelity industry and the stereo-minded public. In this highly entertaining and unusual record are contained a number of sounds and musical selections that are perfect examples of extraordinary stereophonic high fidelity.

As you listen, note that the “Frey” Curtain of Sound”‘ tech-nique has been used wherever practicable. Note, also, the distinctiveness, remarkable clarity and realism that contribute towards making the recording quality exceptional. Remember! Since the record is the initial source of sound reproduction in the home, It must be regarded as the first and most important component in any high fidelity system.

Audio Fidelity has always strived to achieve and maintain superlative technical and artistic quality in its records. This is our guarantee. The LPs from which this recording was made arc typical in that they reflect the highest standards in high fidelity. We suggest you ask for and listen to Audio Fidelity Records at your dealer at the earliest opportunity.

Side 2
1— Devotees of the speedy sports car gather at regular intervals at the Bridgehampton, Long Island track to test themselves and their high-powered steeds to the utmost. Here we are at the Sports Car Club of America national meeting. Our microphones are stationed at the First Bend, directly following the 3,100 feet ‘straight’ of the 3 mile long course. At this bend all drivers must throttle down to 70 m.p.h. (half of their speed on the straight) in order to ‘drift’ round with a four wheel slide before accelerating away. We hear the leaders as they roar past our twin microphones. The cars recorded included Porsches, ‘Mercs’, ‘D-Jags’, Ferraris, Austin-Healeys, Aston Martins and Maseratis. Can you identify them? The leaders lap the corner again, and we close with the mournful sound of a dying engine as one of the entrants limps back to the pits —just making it.

2— Fire! Every city in the world has its groups of brave and dedicated men whose task it is to fight the oldest enemy of civilized man. Their uniforms and equipment may differ in detail, but the sounds of their profession are the same — the crackling of flames and the urgent heart-clutching warnings of their sirens, bells and gongs. Here’s the Pumper Unit of New York’s East 67th Street Station House as it hurtles out on one of its many daily excursions, closely followed by the Fire Chiefs car.

3— Timber! No longer do the woods of North America echo to the sound of the lumberjack’s double-bitted axe thudding into the unyielding sides of the forest giants. Instead comes this sound —the high-pitched busy buzz of the power saw as its operator scientifically guides its speeding teeth into the base of a huge Douglas fir. Recorded in the foothills of Washington State, you’ll hear the saw slicing its way to the final fibers holding the tree to its base, followed by the creaking as those fibers at last give way, and the great fir capitulates to man and hurtles to the forest floor.
(Courtesy of Homelite, a division of Textron, Inc.)

4— It’s five o’clock on a sunny Sunday afternoon in December. We’re at the ringside of the world’s largest Plaza de Toros in Mexico City. We’re part of a capacity crowd, because the matador we’ve come to watch is fighting a bull of the dreaded Miura strain. Fading in to the excited, approving “oles’’ of the crowd (everyone an aficionado in his own right) we listen as the matador executes a series of brilliant passes. Is it the moment of truth? Almost, but a clumsy picador spoils the climax by distracting attention of both bull and man. The crowd roars and hisses its disapproval — disapproval which instantly turns back to happy approbation as the lithe matador restores his dominance over the angry bull, and with artistic cape and foot work prepares his opponent for its last few seconds as chief actor in the drama of the brave bulls.

5— In January 1959 Audio Fidelity took its microphones and Ampex tape recorder down to the Grand Central Station of New York’s I.R.T. subway line. Evening rush hour recordings, these, redolent of the hustle and hurry — and good humor — of the native New Yorker as he speeds his way beneath the crowded streets. You’ll recognize the voices of the platform men of the north bound express track as they warn their passengers, and then comes the unmistakable banging, rattle and rumble of the speeding subway cars as they smash their way to. from and past the platforms.

6— Close Order Drill. A scene in sound which takes place daily in every American army post the world over. Here a typical (and tough) N.C.O. puts his squad through its paces at the Aberdeen Proving Ground. Maryland, his bored dispassionate commands interrupted only by the excited squeal of a Diesel shunter, as it grinds its way past the parade ground carrying a load of heavy ammunition for the big guns which appear on a later band of this disc.

7— The mighty mastodons of war are put to the lest at Aberdeen Proving Ground, and here we listen to a 35 ton tank as it is prepared for an obstacle run. First comes the clang of the lid as they ‘‘button up’’, followed by the sound of “Little Jo”, the auxiliary engine which in turn starts the tank’s main engines. Next the high-pitched whine of the electric auxiliary motors which revolve the main and secondary turrets, followed by the sound as the turrets themselves ponderously rotate. Out of the tank with our microphones now, and to the ground where we record the great beast’s passage to and from as it spins on its treads, and finally the shattering roar of its acceleration as it trundles away out of hearing.

8— Still at Aberdeen Proving Ground, but this time the star of our recording is a heavy calibre machine gun. Bursts of fire follow the whistled commands, and between each burst you’ll .hear the clatter of the empty shell cases from the automatic self-ejecting breech of this potent weapon.

9— Small arms practice at Aberdeen. Rapid fire from automatic pistols on the range. Nostalgic sounds these, to many an ex G.I.

10— Ricochet studies in stereophonic sound! Target for the pistol shots in this recording is a flat rock. You’ll hear some misses —but many hits. Notice how the unmistakable clang and whine of the ricochet echoes down the Aberdeen Proving Ground range.

11— To liven up the party comes the business-like explosion of cannons. Taking a crew of two for its operation this weapon resounds through the Aberdeen Proving Ground — and through your home — like a young thunderstorm.

12— Ace commentator Bob Conto’s hardest of hard-selling pitching whips the crowd to fever point at the Hell Drivers’ exciting show as he brilliantly describes the death-defying stunt to be attempted by Bill Horton. You’ll hear a standard sedan (reinforced at one or two strategic points) take a 50 foot ramp at 70 m.p.h., fly thru the air, and land on another car conveniently left there by the show organizers. Fix these rending sounds in your mind — remember what speed can do to your automobile (and you) — and drive carefully!
(‘‘Hell Drivers” effect courtesy of Kochman Thrill Shows.)﻿

A sound effects record that shows off the wonder of stereophonic sound! Listen to the record and be amazed below!