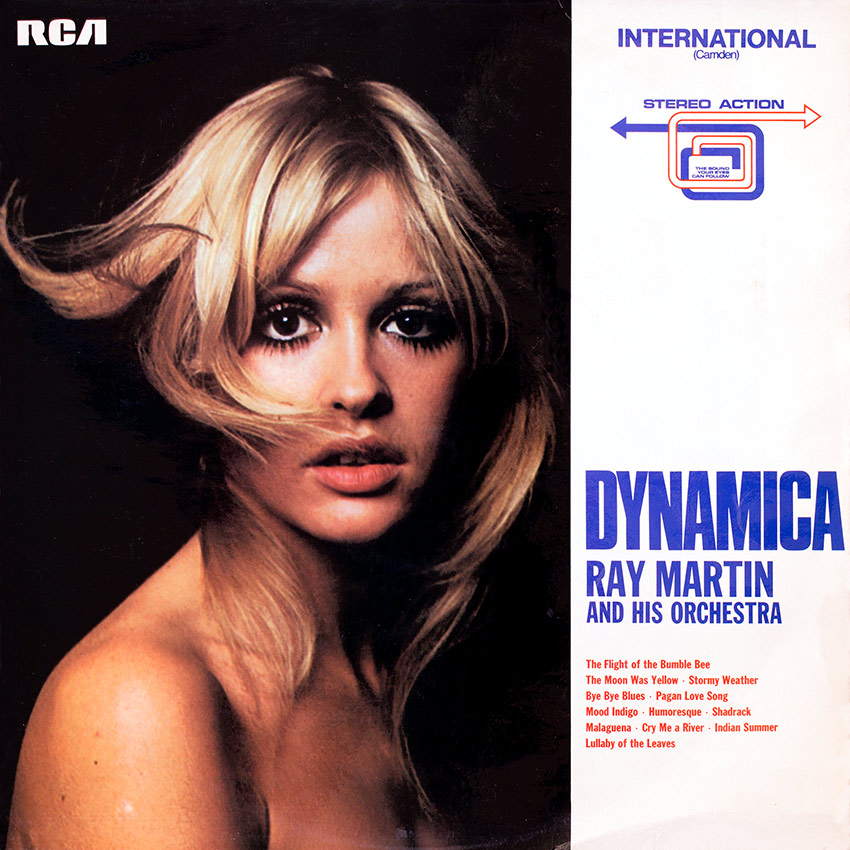 The story of the album

DYNAMICA is an album as unique and intriguing as its title. It is the result of a collaboration between remarkable musicians and equally talented recording experts. Arranger-conductor Ray Martin worked closely with the recording engineers and the Artists and Repertoire staff to select music which could be adapted perfectly to meet the dynamic demands of the new sonic frontier.

The record-buying public is keenly interested in the fact that technical genius has brought the art of sound reproduction out of the old, mechanical territory into the land of colorful, real-life listening pleasure.

Ray Martin has succeeded in retaining the vital appeal of each of these fine songs while adding dazzlingly appropriate embellishments—additional auditory treats which until recently could not be transmitted on records. Each tune in this album was specially chosen on the basis of how well it would lend itself to two-speaker motion. The Flight of the Bumble Bee, for instance, spotlights flutist Julius Baker as the “bee.” He flits furiously back and forth between speakers, with the string action following in hot pursuit. Then there’s Stormy Weather. The real “down-and-out” feeling of Harold Arlen’s classic is emphasize(‘ in the wandering alto sax solo by Phil Bodner. Voices and guitar move lingeringly, too— as if blown by the wind. Shadrack is a particular delight. Much of the action is taken by the voices, trombones and guitar, the latter moving rapidly from side to side. Still there re-mains a special surprise treat at the end. The talent experts who made the album were “thinking stereophonically” as they created it. Ray Martin and his colleagues have captured all the exciting beauty of the blazing and brilliant world of stereophonic sound… and the world is yours. Here it is.

The story of stereo action

Stereo Action is a revolutionary concept of stereo recording in which instruments, singers, whole sections, and even full orchestras are placed into movement so that the listener has, literally, music his eyes can follow.

Stereo Action is a conscious and deliberate effort to set music in motion by utilizing actual movement of instruments and sounds from one speaker to the other, and even, at times, suspending an instrument or sound be-tween speakers. It is a pioneering concept in stereo listening, and resulted from years of extensive experiments and remarkable technical break-throughs by the RCA Victor corps of engineers.

Stereo Action requires a wholly new approach to recording. Musical motion is first conceived by the composer and arranger. Every note of the music to be recorded must he scored with Stereo Action in mind, as if it were a new dominating musical instrument or voice. An elaborate system of charting each and every instrument for proper stereo placement guides the actual scoring. In addition to the musical annotation, a companion series of non-musical diagrams for the studio work is developed. This wedding of musical artistry and electronic creativity produces Stereo Action—literally, the sound your eyes can follow.