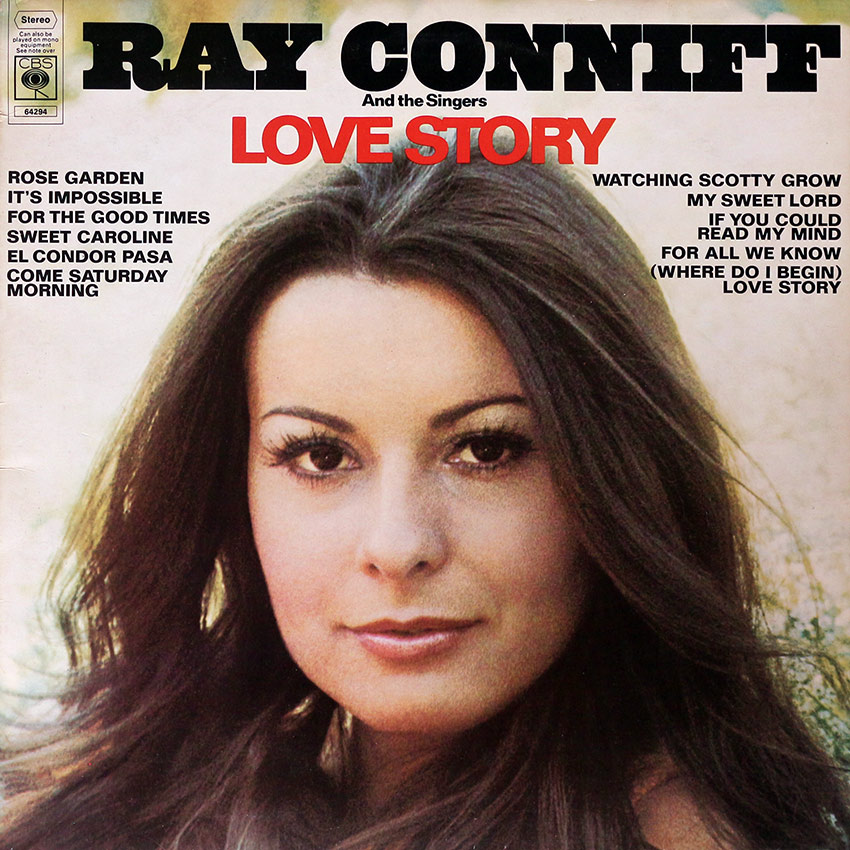 In bursts of enthusiasm to capture the “now” sound, musicians sometimes forget that basic musical beauty lies in the melodic line. Not necessarily in electronic magic, The artistry of Ray Conniff is the listening proof of this.

The view from the “live” side of the microphone as compared to the “listening” side of the microphone at a Conniff recording session is as different as Beethoven is to Bacharach. In the studio, each performer faces that “live” mike and hears only his own sound and that of his immediate neighbor. The “listening” side is the soundproof control booth where everything is heard and balanced for the finished result.

While recording, Ray stands in front of the orchestra and chorus, a headset on that enables him to receive this same complete sound. His practised ear tells him immediately if some one performer is “off-mike.” Each number is rehearsed until it meets with Ray’s standards; then and only then does he call for a “take.” Several of these takes may be required before he feels he has the one that echoes the perfection he demands on his albums.

As a member of the Conniff Singers for many years, our times together have been what “Memories Are Made of . . .” particularly when we have been on tour and have performed in front of a live audience. The stimulus of travelling all day and performing all night may sound exhausting. but it’s the adrenalin that makes for excitement. The feel of a recording studio can never be compared with the feel of an audience, yet in Studio A at CBS Records in Hollywood,. Ray, like Merlin, re-creates the magic, and in so doing brings out the best in us all.

Looking out at “Mr. C. from our raised platforms is looking at a study in concentration. Yet a man whose sense of humor shows itself repeatedly when he laughs with all of us at a sour note in the chorus or a “clinker” in the orchestra. His patience is much in evidence when trouble arises over a difficult musical passages as he Is a man who makes each member feel important to the entire arrangement.

There is no substitute for purity of sound. An audience may have varied musical tastes, but the success of Ray’s music proves that a majority of people the world over prefer his straightforward arrangements. His instinct unfailingly leads him in his selection of songs that never grow old in popularity, a trend that has constantly grown ever since his first album, S’Wonderful.

At that lime. he used only eight singers: four girls singing the same notes as the trumpets and clarinets and four boys following the trombones and saxophones. That was when the now famous “dah-d’dl-ee-yah-dal” was first heard in place of words. The singers actually became instruments, singing orchestral inflections instead of lyrics.

Through the years the chorus has grown to twenty-five singers. the “doo-doos’ and ” wah- dahs,” having been replaced by words. and the original eight-part harmony expanding sometimes to sixteen separate vocal lines. Ray’s creativity never lies dormant It is ever-changing to continually present his own brand of distinctive listening pleasure.

Here is a man who creates a GOOD sound, a TRUE sound, a REAL sound, the Ray Conniff sound.