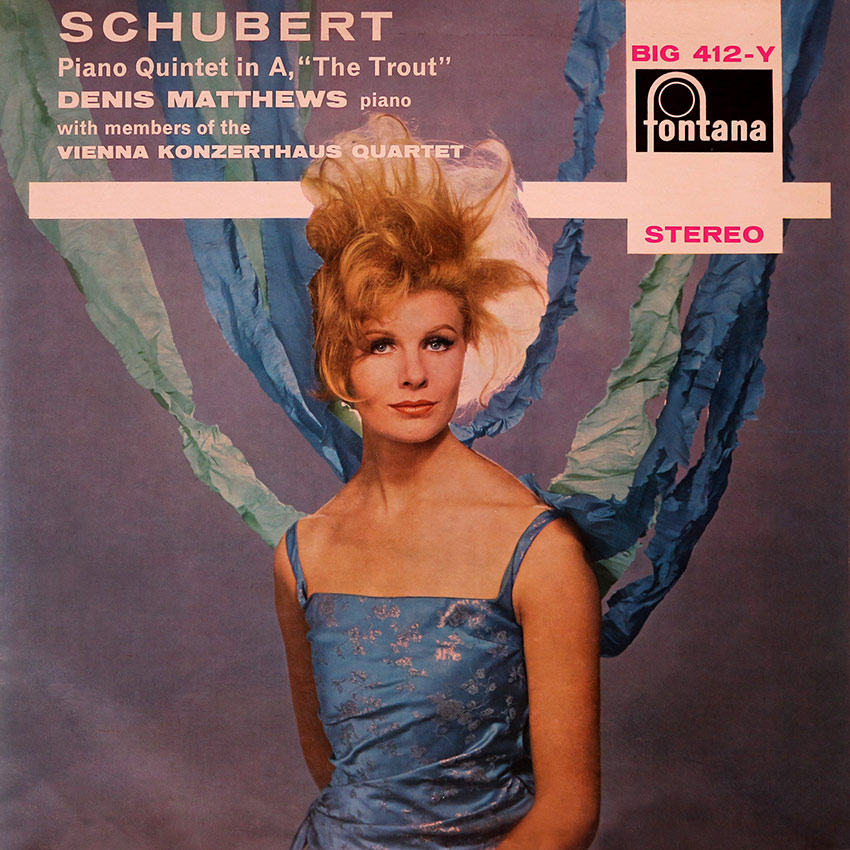 The cover of this record features a photograph taken by ‘Lidbrooke’ whose style was in much favour in the early sixties. His photos featured on the cover of Tatler magazine and if you like this kind of thing you can buy a facsimile of one of his Tatler covers here.

The notion is gradually being dispelled that Fraanz Schubert’s inspired music was the naive product of a innocent childlike mind. The seventeen year-old youth who in 1814 read Goethe’s Faust and set Gretchen am Spinrade from it with such fine psychological insight, the man of thirty-one who seized upon Heine’s poems almost as they came off the press and set them with such profundity, was a thoughtful and independent mind. He lived in times that were forbidding for intellectual freedom. Austria, ruled by Francis the first and his advisor Count Metternich, lay under a cloud of fanatical censorship.

All plays, books, and even music set to words, had to be submitted to the police for approval. And it fills out the picture of Schubert as a human being to note that he had his brushes with the censors, as indicated by two passages in the diary of his friend, the poet Eduard von Bauernfeld, written in 1826. First comes, “Schubert liked the opera very much; but we arc afraid of the censorship”. Then, two months later, comes, “The libretto prohibited by the censorship. Schubert wants to compose it all the same… He also had his brushes with the sharp, penny-pinching practises of publishers, crying in a letter to his father, “If only some decency might be expected of those of art dealers! But the wise and benevolent dispensations of the State have well and truly seen to it that an artist shall ever remain the slave of every wretched huckster.”

As it happened, the “Trout. Quintet was never offered by Schubert to the “hucksters”. A wealthy musical amateur, Sylvester Paumgartncr, of the town of Steyr, commissioned it in 1819. Schubert left it in manuscript. In 1829, a year after the composer’s death, the music publisher Josef Czcrny announced that among “numerous manuscripts which the favourite tone-poet, Franz Schubert, left.” he had purchased “a grand Quintet for pianoforte, violin, violincello and double bass,” which had “been performed in several circles at the publisher’s instigation, and declared to be a masterpiece by the musical connoisseurs present… He brought it out as Op. 114, and also transcribed and published it as a piano duct.

The five-movement form of the “Trout” Quintet, with a theme and variations movement inserted between the Scherzo and Finale, suggests a source in the late 18th century Divertimento. But what had in the previous century tended to be an out-going, witty and galant form, with a touch of sentiment, takes on in Schubert an added inwardness of feeling announcing the stirring of musical romanticism. The instrumental combination has no counterpart in Mozart, Haydn or Beethoven. It may have been suggested in Schubert’s mind by a Quintet Op. 87 for similar forces by Johann N. Hummel, a Hungarian composer and piano virtuoso who had taken lessons with Mozart. and whose works, rarely performed today, were much admired in the 1820’s. But what stamps the “Trout” Quintet as wholly Schubert’s voice is that it is built from beginning to end with his songful lyricism, cash melody foliating into equally beautiful variants. And this accounts perhaps for the -easy” structural methods which have caused a few condescending eyebrows to be raised, such as the fact that the recapitulations in the first, second and last movements arc an almost note for note repetition (but in different keys) of the expositions. Schubert here was striking out on his own path, reworking the classic sonata form he had inherited. His long-breathed melodies, varied and expanded almost upon the heels of their first appearance, now replaced the Beethoven-style declamatory motifs. And so he had to begin to reconsider every aspect of the form as a whole. Certainly a kind of repetition which would have been amiss after a stormy, dramatic development section like Beethoven’s these demand a psychological change in the recapitulation and coda falls gratefully on the car in the genial lyrical flow of the – Forellee Quintet. The tams problem is raised in Schubert’s songs, where in some he builds with a cumulative intensity, and constant transformations, while in others equally great the close repeats the opening.

The first movement, Allegro Virace (4/4, A major), opens with a “curtain raiser” chord and piano arpeggio, introducing Al the instrumental dramatis personae. Fora while it moves hesitatingly, as if Schubert were slowly shaping his first theme. This emerges finally (bar 27) as a lively song from the violin, with piano arpeggio answers. We seem to have been listening to a slow introduction, but actually Schubert’s opening measures have given us a foretaste of the development section. The exposition is a lavish outpouring of subtly connected melodies. T. development makes no effort at working up all this material, and is more in the nature of a reflective episode, based on the hesitant, opening version of the first theme and taking it for an imaginative harmonic journey. It is climaxed in a dialogue between violin and piano, accompanied by the other strings. Then comes the rehearing of the melodic chain of the exposition.

The Andante (3/4, F major) is a spun-out “song without words”, reminding us of Schumann, phrase, “gentle, deep ethereal melancholy”, with its second melody, sung by the viola and cello in F sharp minor, especially stiffing the heart as only Schubert can. The Scherzo, Presto (A major. 3/4), is a lusty dance with an Austrian folk touch in the trio. Then comes the theme and variations movement, Andantino, 2/4, based on the song Die Fore. or `Me Trout’, which Schubert had composed two years before, and which is now transposed from D 011 17 D. During the course of the variations, each instrumentalist, including the double bass, gets his opportunity to shine. In the first three variations, the tune is easily recognizable under the ornamentation. With the fourth variation (D minor), dramatic turbulence enters, and a sweet pathos with the fifth (gravitating between B flat major and B 131 17/4741. Like the mock-stormy episode in the song Die Fore., the mood is not real tragedy but a kind of whimsical play-acting. The closing variation goes back to the melody of the song, but the tempo is now Allegretto, and the piano makes a sparkling show with the lilting runs that in the accompanimento the original song had evoked the image of a rippling stream. The Finale, Allegro giusto (A major, 2/4) starts with an unpretentious dancing melody, tossed from the upper strings to the piano and back again. But then the melody throws of its simple cloak to emerge as an exhilarating booty in D major, sung by violin and viola, with the piano commenting excitedly in dotted rhythms and triplet runs. The entire exposition is a chain of free melodic associations, with little rippling figures near its close indicating that the song Die Fore. is still in Schubert’s mind. A touch of drama hints at a coming development section, but this is only Schubert jokingly teasing the listener, for there is no development but only a transposed repetition of the exposition. An easy way out? Perhaps. But Schubert wrote this work with no other purpose than the pleasure it gave him and his friends to play it, and what pleasure it gives us today!