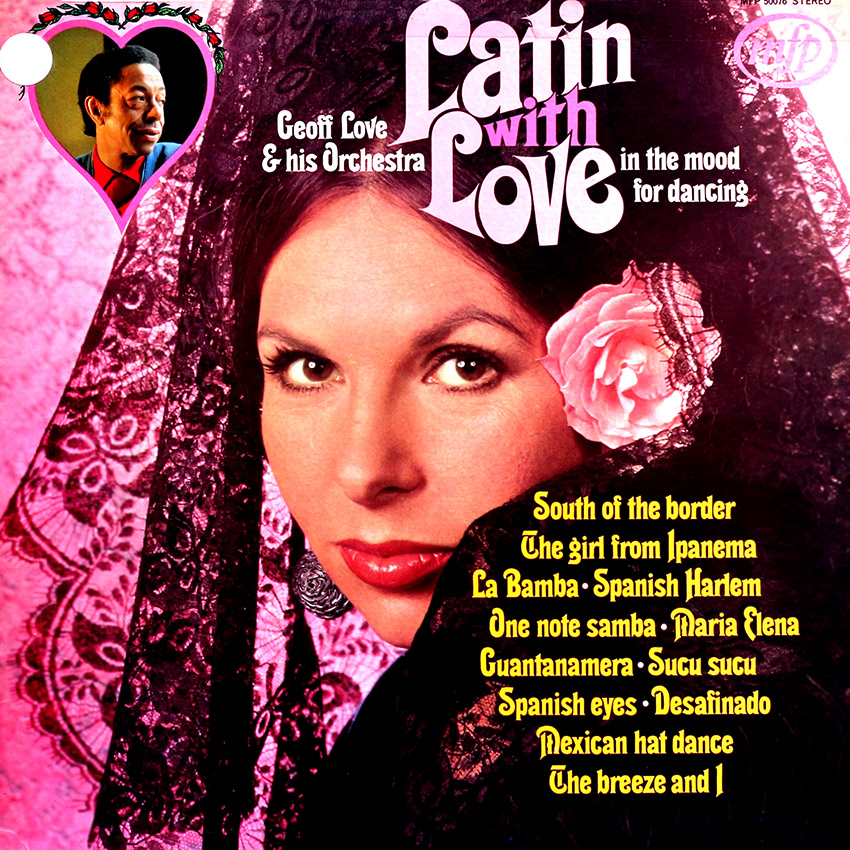 The Love in question is, of course, Geoff Love. One of Britain\’s most distinguished and successful musical directors and arrangers, and certainly one of the most popular with the public and his fellow musicians, with a constantly cheerful and amiable nature as befits his surname. Geoff has worked with and won the unstinted admiration of some of the greatest names of international show business, including Shirley Bassey, Howard Keel, Judy Garland, Paul Robeson, Vera Lynn, Frankie Vaughan and Des O’Connor. As an artist in his own right, Geoff’s albums mentioned above have proved to be amongst the best-selling records in the history of the label.

The latest is Latin With Love, and is destined for the same Popularity. Geoff selected twelve of the perennially favourite melodies from Latin-America or inspired by that colourful sub-continent, and arranged them for an orchestra comprising four trumpets doubling fluegel horns, four trombones, foe woodwind, twelve violins, four violas, four cellos, piano, two guitars, bass doubling bass guitar, one drummer, and three Latin-American percussion. The results are ear-catching and immensely enjoyable.

La Bamba, that lively dance speciality from Vera Cruz in Mexico, provides a suitably bright opener with all sections of the orchestra spotlighted and a growling jungle flute solo. The mellow evocation of that area in New York city known as Spanish Harlem begins with marimba and piano setting the easy pace and a cor anglais solo later. Guantanamera receives an appropriate Afro-Cuban atmosphere with the brass shining over the cha cha cha beat, and Sucu Sucu of Argentine origin gets a sprightly samba treatment here. Another Brazilian tempo in the form of the bossa nova ensues as a second Music for Pleasure Latin music maestro, Duncan Lamont, is featured on tenor-saxophone in The Girl from Ipanema, and the bossa mood is maintained for One Note Samba with fluegel horns prominent.

The second side begins noticeably South Of The Border as Geoff coaxes a Mexican mariachi sound from the trumpet in cha cha cha time, and then we meet the beautiful Maria Elena . portrayed in bolero style by the guitar against a background of muted trombones, followed later by piano, strings, oboe, and a key change into a full ensemble passage. Marimba and trumpets open Spanish Eyes in baion time, with the rest of the orchestra joining in turn, and then comes the famous prototype bossa nova, Desafinado, introduced by woodwind and trombones before the fluegel horns take the theme. The bolero returns with The Breeze And t, showcasing strings and low-pitched woodwind, and the rhythm section contribute the right atmosphere for a rousing climax to the LP with an infectious Brazilian marcha tempo redolent of street parades at carnival time, and the mariachi trumpets tel the Mexican Hat Dance in motion.

Geoff Love has assembled a dozen proven Latin favourites, and presented them with all the verve, vivacity and melodic richness which their background demands. It is impossible to refrain from the obvious remark – you’ll love it!