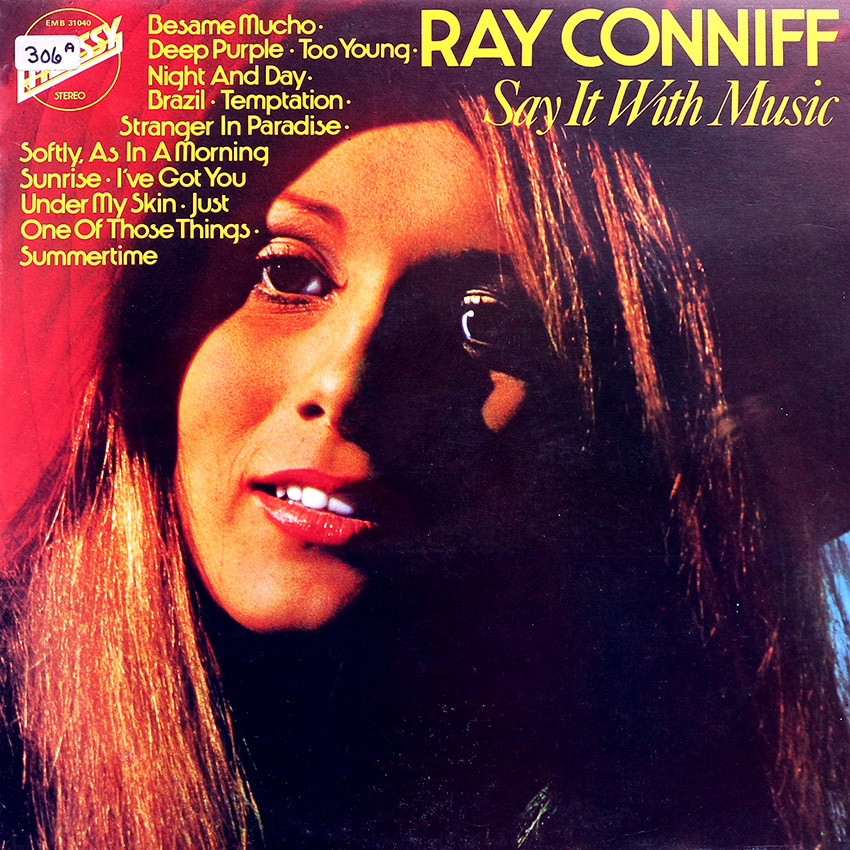 “Say it with a beautiful song,” sing Irving Berlin’s charming lyrics for the title tune of Ray Conniff’s album, and that is precisely what America’s Number One arranger does. Moreover, he does it with a Latin beat, just a hint of the intriguing rhythms from the tropics. The brilliant Conniff way with a tune is too famous to need further mention, but the saucy extras he has added to this new programme add up to entertainment that is brighter than ever.

Ray Conniff’s novel methods of blending voices and orchestra have brought dancers hurrying back to the floor and caused even casual listeners to sit up and take notice. Female voices are doubled with trumpets, high saxophones or clarinets, while the male voices are paired with trombones, trumpets or saxes in the lower registers. This subtle colouring intensifies the soft toned and at the same time mellows the harsher ones. And it produces the glossiest dance music anyone could desire.

Ray began his recording career as an arranger (for Johnny Mathis, “It’s Not For Me To Say”, for Guy Mitchell, “Singing The Blues”, for Johnny Ray, “Walkin’ My Baby Back Home”, among others) but so vivid were his talents that he was soon signed as an artist himself. During the years that Ray has been arranging and conducting his albums for CBS, he has notched up no less than nine gold records, and demand for Conniff albums is still growing every day.

In this collection, Ray plays a dozen favourite songs, touching them lightly with a Latin inflection, Four are by Cole Porter, others by George Gershwin, Sigmund Romberg, Peter DeRose and, of course, the Irving Berlin title tune. Each of them is, to quote Mr Berlin again, “a melody mellow”, and each of them is another Conniff delight.