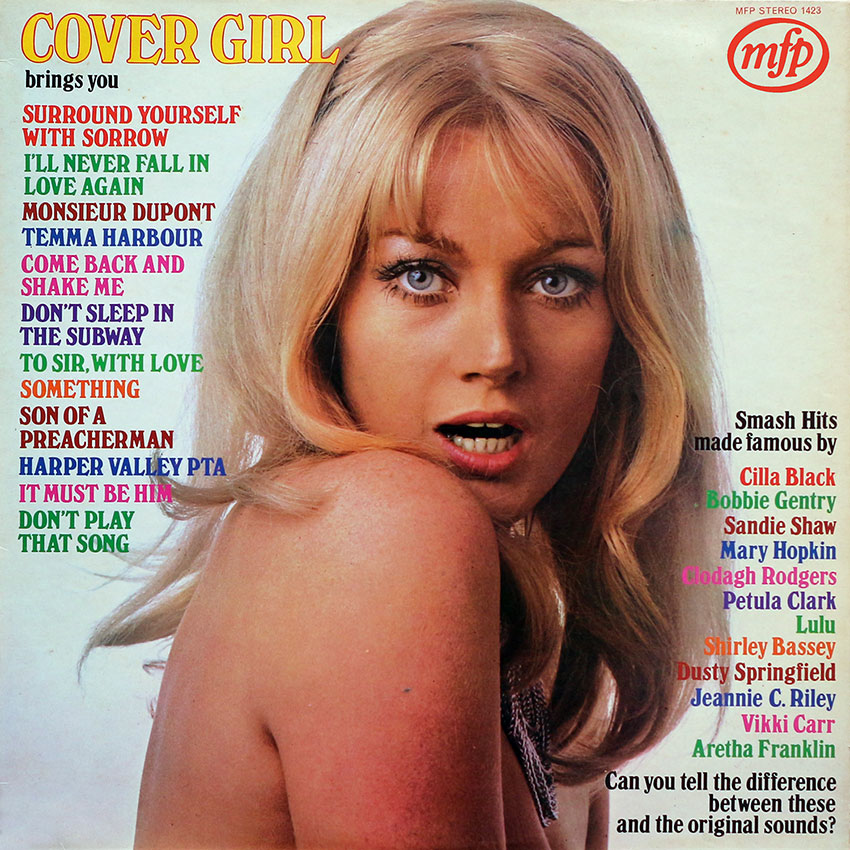 Yet again Music for Pleasure brings you twelve exciting songs on a single album – but these are songs with a difference, twelve outstanding hits made famous by some of the world’s most popular female vocalists, all skill-fully recreated by our studio singers who successfully recapture the atmosphere injected by the original artists.

Vikki Carr waited several years for her first major achievement, ‘It must be him’ and Clodagh Rodgers, no new-comer to the pop scene emerged in 1969 to rise high in our charts with `Come back and shake me’. Clodagh has achieved a great deal in a very short time, and has recently been chosen to represent Britain in the forthcoming Eurovision Song Contest.

Lulu, Sandie Shaw and Mary Hopkin have also represented Britain in the same contest, and songs made famous by each of these singing stars are featured on this album. Lulu sang the tide song for the film which starred Sidney Polder and Judy Geeson, To Sir with love,’ in which she also took ik part, that of Barbara Pegg. This song rose to the top of the American charts for Lulu, and Sandie Shaw’s ‘Monsieur Dupont’ proved to be a winner, as did Mary Hopkin’s ‘Termma Harbour’. Shirley Bassey recently scored a tremendous hit with her new and fascinating interpretation of a number penned by George Harrison, ‘Some-thing’, and Dusty Springfield added another song to her long line of successes with ‘Son of a Preacher Man’. With the hit-making team of Tony Hatch and Jackie Trent writing a song for Pet Clark it was a foregone conclusion that ‘Don’t sleep in the subway’ would be a hit for Britain’s immensely popular singer, and Cilia Black rather proved to us all that it’s possible to increase your popularity if you ‘Surround yourself with Sorrow’

The jaunty, country-styled ‘Harper Valley P.T.A.’ soared high in the hit-parade for Jeannie C. Riley, as did ‘I’ll never fall in love again’ for Bobbie Gentry, and ‘Don’t play that song’ followed a similar pattern for the soulful Aretha Franklin.

Let the songs on the record remind you of these tremendous artists, hear them now on this excitingly new Cover Girl album.