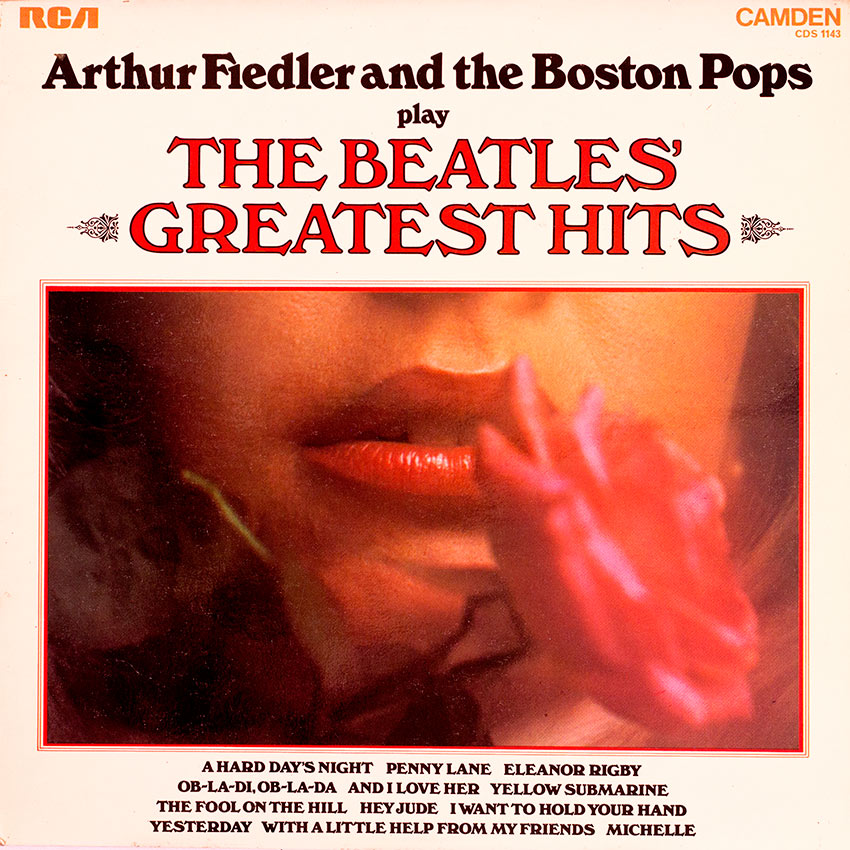 Musically, Arthur Fiedler likes to be “where it’s at.” In the winter of 1963 Liverpool was the place, and Mr. Fiedler was there. He was conducting concerts with the Royal Philharmonic, and intrigued by the overnight popularity of the “Mersey sound,” he spent some time in hearing and absorbing the local groups. As a musician, he was both amazed and pleased that this music was achieving the significant goal of bringing youngsters together, causing them to participate and enjoy.

When he returned to Boston, Mr. Fiedler decided to adopt the “Mersey sound” for his orchestra. He started at the top: a symphonic arrangement of I Want to Hold Your Hand, the fantastically successful hit by Liverpool’s most distinguished alumni: The Beatles. This became one of the most popular Boston Pops encores, and their subsequent recording itself invaded the best-seller lists.

Five years have passed, and aside from the fact that almost every male wears his hair just a little longer, it is generally accepted that the Beatles (the “writing” Beatles: John Lennon and Paul McCartney) compose terrific tunes.

Since Arthur Fiedler is wedded to the idea that everybody likes a good tune (whether it be Bach, Beethoven, Brahms or Beatles) he has enlarged his Beatles repertoire in recent years and picked some of their best creations for this album. Since these are instrumental arrangements made especially for the 95-man Boston Pops Orchestra, care had to be taken to choose melodies that could live without the lyrics (arranger Richard Hayman has introduced some amusing musical references to such other Boston Pops concert regulars as Tchaikovsky and Richard Strauss). Judging by the audience reaction in Boston’s venerable Symphony Hall, there should be at least one of these albums in every home! It is Mr. Fiedler’s modest goal to introduce youngsters to the splendors of the symphony orchestra and the rest of us to the creative tunefulness of today’s young composers.

As a matter of interest we should add that these recordings are all brand-new (with the exception of Yesterday and Michelle taken from Up Up and Away) The present version of I Want to Hold Your Hand was taped on June 20, 1969 (Mr. Fiedler decided that the tempo of his 1964 recording was not quite as bright as it should be). While we recorded and issued a “live” concert performance of And I Love Her and A Hard Day’s Night some years ago, we concluded that new recordings made under the same ideal studio conditions as the rest of the album would give a better result.
PETER DELLHEIM