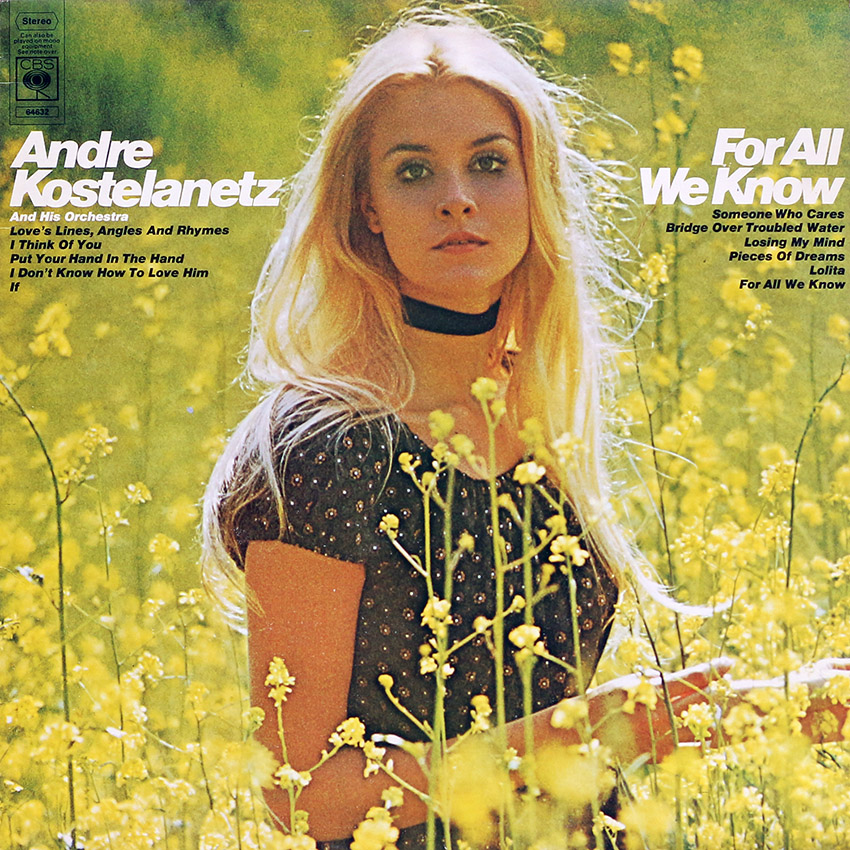 Andre Kostelanetz plays to a devoted audience that is so large in its scope that it is virtually the entire population. He is the musical spokesman for the melodic majority, which includes everybody who likes a melody. His repertoire is drawn from a larger domain of music – from opera to gospel – than anybody else’s. He’s been doing it better and longer than the rest of the orchestral conductors and his seventh sense of what, among the new music, has lasting appeal and vitality is truly amazing.

There is always a distinguishable rhythmic beat in the Maestro’s renditions. Whatever style he is working in, the basic spirit of that style is brought over to orchestral arrangements that then blend into a generous personal style.

Kostelanetz has been delighting !he American listening ear for a good long time now, but from his first recordings to this one in your hand there is a continuity of basic melodic subtlety and sensitivity that is his hallmark. The music changes, from season to season, year to year, but the Kostelanetz way with voicing and highlighting is consistently present.

What the Maestro does is to take the songs – and particularly the words in them – and sing them with an orchestra. You don’t hear the spoken words, but the diction of their meaning and emotion is always there, in the musics and the effect of their feeling is in some way magically heightened by this approach. It’s Kostelanetz trademark in popular music, and it comes from his thorough mastery of the worlds of opera and classical instrumental music. In this album you will hear the Maestro use a single human voice – in this case soprano – as an instrument in the orchestra. No words are given as lyrics, but we hear the orchestra (including the intermittent voice) announce each song with all its meaning intact, softening everything, taking the hard edge off the sound. It is popular music in its Sunday best, standing tall and smiling.

Andre Kostelanetz can perform this sleight of hand regardless of the source. The song can come from a film, a Broadway show, from the professional songwriters of pop or Rock, or from gospel. Whatever the beat was to begin with, its adaptation under Kostelanetz comes over like the classic statement of the song. The words aren\’t there, but we hear them whispered in the strings, blared in the brasses and whistled in the woodwinds.

To music like this there are no boundaries. It will never be lodged tightly in one cubbyhole or another, under one heading or another. And listening audiences know by now that when they have Kostelanetz\’c2~at the helm, the album is going to be always listenable, always musically articulate, profoundly artistic and right up-to-the-moment.