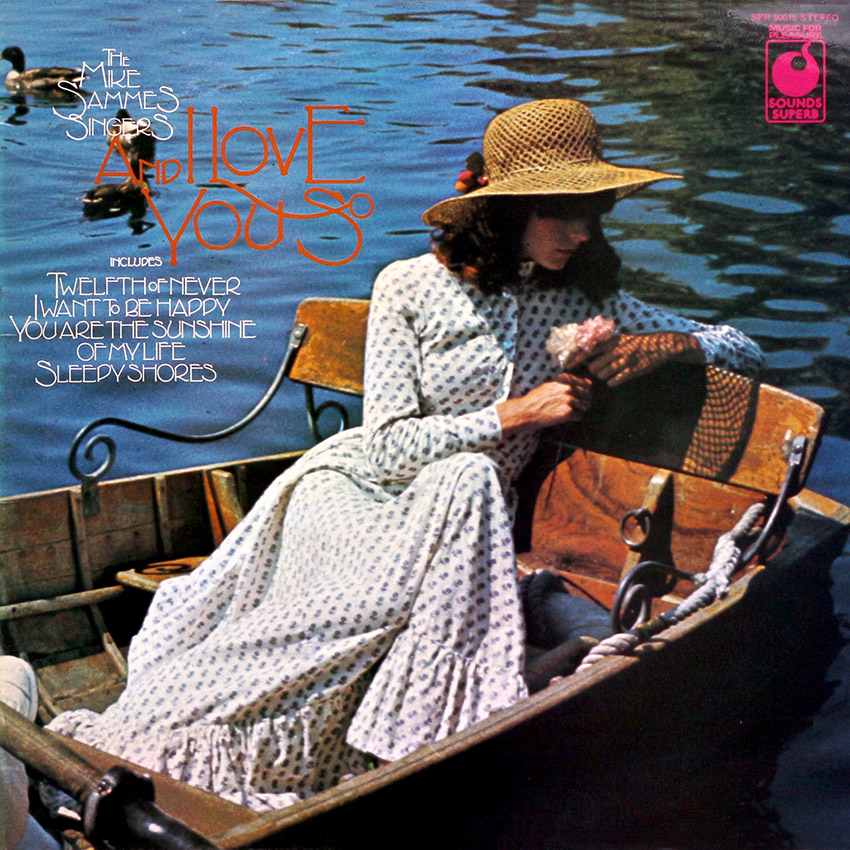 Taking as their inspiration the highly romantic title And I Love You So the Mike Sammes Singers have woven twelve attractive variations round the eternal theme of love and happiness by means of as many different songs. Some are favourite melodies made fresh by the highly individual Mike Sammes vocal treatment, and some may not be so familiar by name. Most are usually heard as songs for solo singer but here the lovely sentiments conveyed in the words and music are created by the blending voices of the Mike Sammes Singers into a wholly delightful offering of vocal harmony.

There are two compositions by Don McLean Vincent and And I Love You So, which was a recent big hit for Perry Como; The Twelfth Of Never has been the subject of many solo recordings by Johnny Mathis, Dickie Valentine: and, not recently, Donny Osmond; Rain is the creation of that international singer-guitarist Jose Feliciano. If was a big hit for Jack Jones, as was You Are The The Sunshine Of My Life for Stevie Wonder.

A couple of big show songs are featured – Knowing When To Leave, a particularly pleasant number from “Promises, Promises”, and I Want To Be Happy which recently enjoyed a minor revival thanks to the success in New York and London of the mid-twenties musical “No, No. Nanette”.

The American Trilogy which ends the first six of this tuneful twelve consists of “Dixie”, “Glory, Glory” and “Hush, Little Baby”. and the widely varying selection is completed by three songs which were originally heard as melodies introducing television series. Lightning Tree was the tune chosen to introduce “Follyfoot”; The Night That We Found Love is written by Steve Race and used by him as theme music in one of his popular TV series, and Sleepy Shores is the title given to the haunting melodies which framed the series of “Owen M.D.”

It is little wonder, perhaps, that the Mike Sammes Singers have a penchant for television tunes, having been featured in so many of the popular TV shows themselves. Anyone who has actually been present at one of the “Sunday Night at the London Palladium” shows may have seen them, in the upper left hand stage box acting as “backing group” to some of the world’s greatest artistes, whilst other British stars who have benefited from their harmony on television include Des O’Connor, Tom Jones, Engelbert Humperdinck. Harry Worth, Tommy Steele, Morecambe and Wise, Keith Michell, Harry Secombe and Petula Clark in all of whose series this melodious sextet (three boys, three girls) has been a welcome feature.

Now here is another of their own records, for you to play whenever you please with its sparkling selection of super songs. The sound of The Mike Sammes Singers is always superb, and never more so than on this particular album.