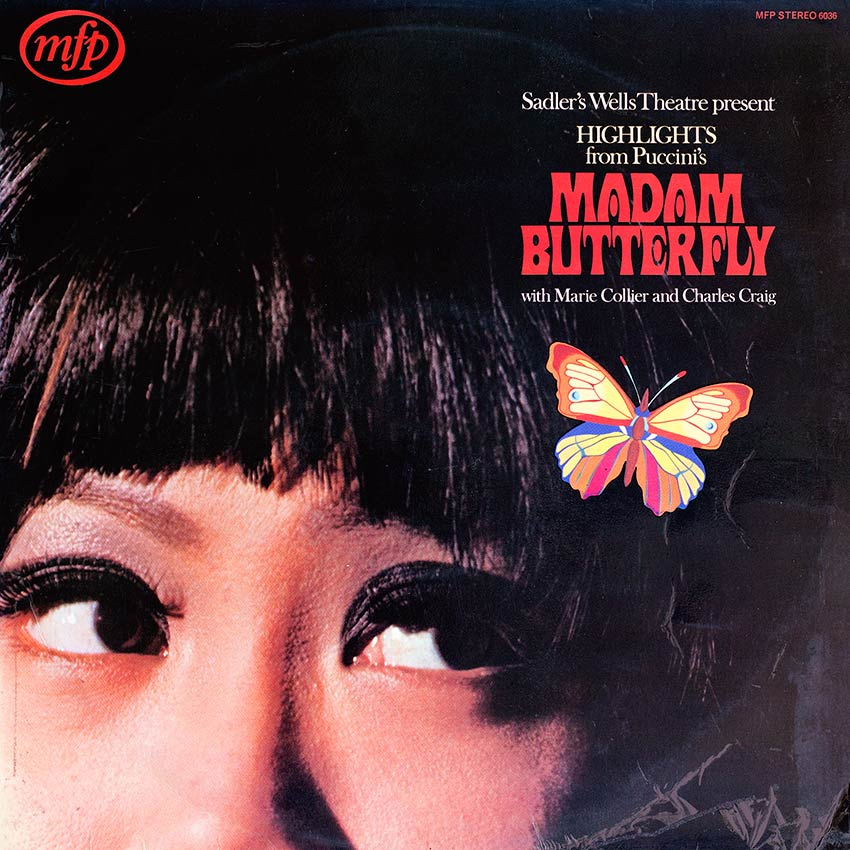 The cover of this record is a fine example of that age old maxim, “less is more“. By choosing to show only a portion of the woman’s face, mainly the eyes, we are left wanting to know more, to see more. The colours are mostly restricted to the reds and blacks of the colour spectrum, further creating a minimalistic look. What do you think about this record cover? Let us know.

The tragic story of Madam Butterfly begins when Lieut. Pinkerton, of the American Navy, is inspecting the house he has taken for his Japanese bride-to-be, Madam Butterfly. An American consul, Sharpless, tries to dissuade Pinkerton from the marriage-and explains that Butterfly has coot given up her religion for it. The marriage is celebrated, but not without opposition from the family and denouncement of Butterfly by her uncle, a priest, for forsaking her faith. Act One closes with the beautifully moving love duct, which also closes the first side of this record.

Butterfly has a little boy who has never seen his father, because Pinkerton, recalled to America, never kept his promise to return. Butterfly is sure he will come and sings of her faith in him in the world-famous aria ‘One Fine Day’. Sharpless tries to tell her of Pinkerton’s marriage to an American girl, but Butterfly doe’s not listen to the explanation and still believes Pinkerton will come back into her life. An American ship arrives in the Bay and Butterfly and her maid, Suzuki, decorate the house for Pinkerton’s arrival.

Pinkerton eventually arrives with his American wife and Sharpless, but when he realizes the position he cannot bear to stay. Butterfly hears that Pinkerton wishes to adopt the child and promises that within half an hour he may take the boy away. Left alone she embraces the child and then kills herself by falling upon her father’s sword.

The wonderful voice of Marie Collier, who played Butterfly so successfully in the Sadler’s Wells theatre production, repeats her fine performance on this disc. Miss Collier is already a firm favourite with visitors to Sadler’s Wells and Covent Garden. Since she recorded this album she has gone from strength to strength.

Charles Craig is not new to records. This record was produced as a tribute to his fine performance in the Covent Garden production of ‘Butterfly’. His performance as Lieutenant Pinkerton was greeted with rave reviews by the critics after the opening night and his first record certainly deserved the title ‘Fame in a Night’. He has since made many records and operatic appearances.

Ann Robson is no newcomer to the role of Suzuki – she has played it many times – and Gwyn Griffiths as Sharpless joins with hoe to add great support to Marie Collier and Charles Craig.

The Sadler’s Wells Orchestra is conducted by Bryan Balkwill, who once again gives the faultless performance that one has come to expect of him.