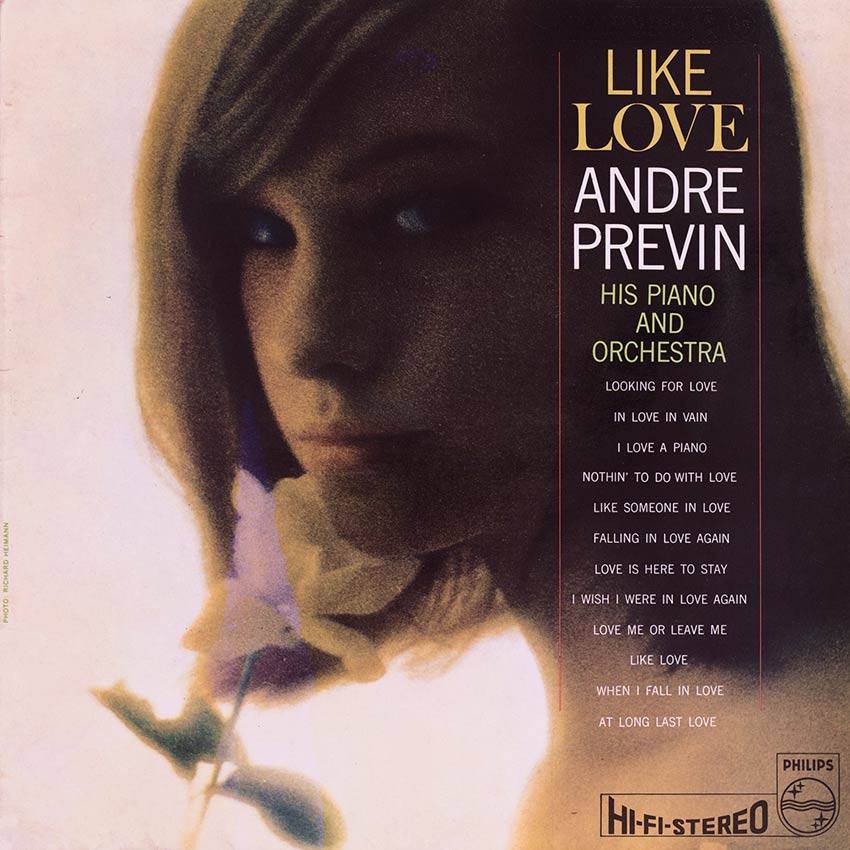 ANDRE PREVIN
Few young artists can point to such consistent accomplishment in a variety of fields as Andre Previn, and perhaps no one has achieved the same level of performance. Consider: within a comparatively short space of time, he has (1) participated in one of the best-selling jazz albums of all time, the jazz edition of My Fair Lady; (2) has super-vised and conducted Porgy and Bess for the movies; (3) was soloist in an outstanding collection of mood music; and (4) appeared with Andre Kostelanetz and the New York Philharmonic in an enthusiastically acclaimed performance of the Gershwin Concerto in F. And all this, mind you, happened while he continued to turn out notable jazz performances for records and a number of original scores for the screen.

In this collection, he turns his talents to a dozen fine songs dealing with love, serving as piano soloist and conductor as well, and further shows his amazing creativity by providing two of the songs: “Like Love,” and “Looking for Love.” (Another original, “Nothin’ to do With Love,” is by Russ Freeman.) The result is as romantic as the most deeply-smitten swain could wish and at the same time as musical and rewarding as either jazz or classical musicians could ask for. It is, in short, Andre Previn at his best.

Born in Germany in 1929, Andre Previn began his musical training in Europe and continued in the United States after his arrival in 1939, numbering Castelnuovo-Tedesco among his teachers. Apart from two years in the Army, he has been writing film scores since 1949, and has been nominated three times for an Academy Award, winning the Award in 1959 for his musical scoring of Gigi. “Like Love” presents Andre Previn in his debut on Philips Records as pianist, conductor, arranger and composer and displays his amazing inventiveness in all four roles. That it also provides endlessly delightful listening needs no emphasis at all; such rewards are understood when the pianist is like Previn.