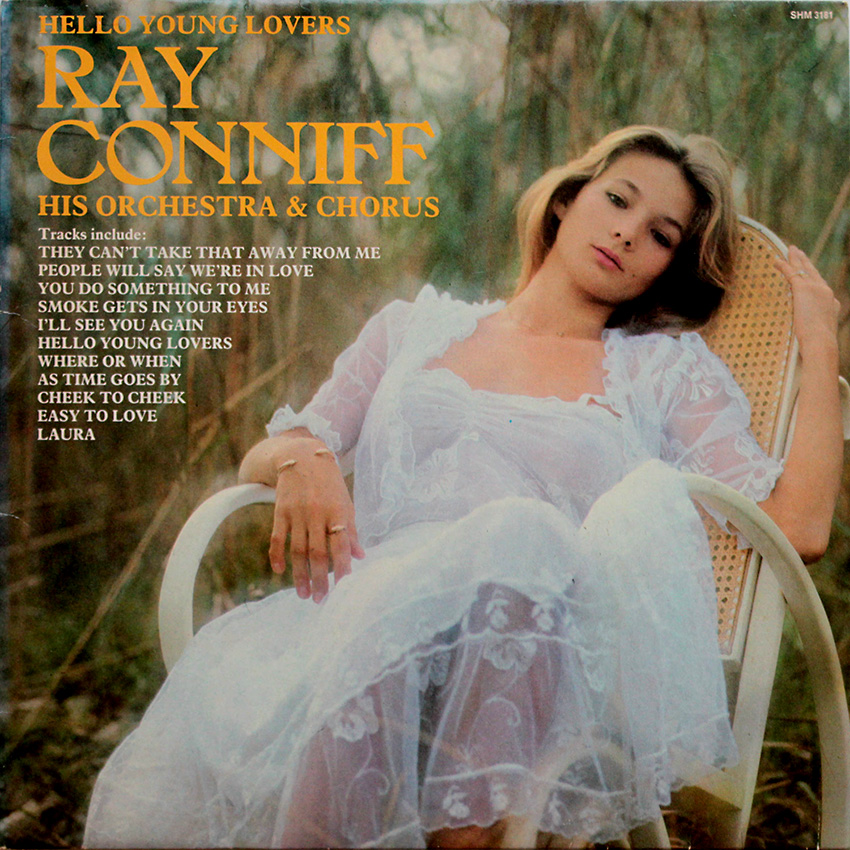 Most of you reading this already know the instantly identifiable sound that is Ray Conniff. You are familiar with the Conniff mystique and arc going to buy this record no matter what it says here on the back because you know if it’s Conniff it’s going to be great. But the Conniff greatness didn’t just happen. The piece of vinyl resting between these two pieces of cardboard is – like all Conniff records – the product of years of hard work, devotion, development and imagination. It is testimony to the musical genius who created it and gave his name to the sound pressed in its grooves.

The Conniff sound began in Attleboro, Massachusetts, back in 1933 when Ray and some high school buddies decided to start a dance band. Ray played trombone because his father had given him one, and since the band couldn’t afford to buy arrangements, Ray was elected to that chore too.

He had seen an ad for a transposer called the “Lightning Arranger” in Billboard so he invested a dollar and launched his arranging career. Ray says today, “That was the best investment I ever made.” His first arrangement was for Sweet Georgia Brown and took him two weeks to complete. The band liked it, the kids food it and Ray Conniff, arranger, was born.

After high school, Ray went to Boston and joined “Dan Murphy’s Musical Skippers” as trombonist/arranger/truck driver and started his professional career as a barnstorming musician for the grand sum of $35.00 a week. Ray soon discovered that playing and arranging for the same orchestra were providing him with a million-dollar education in the rudiments of orchestral arranging. By hearing and performing the arrangement night after night, the arranger has an opportunity to analyze the good and bad points of each arrangement. In the three decades Ray has been performing this dual role, he has discovered and discarded all the devices that don’t work and found or created just about every one that will.

While on tour with the “Skippers,” Ray Conniff encountered a musical genius of that era… Count Basic. The musical world had yet to discover the “Count,” but Ray spent every free night at the Reno Club in Kansas City listening and learning. Ray credits Basic not only with his considerable contribution to jazz and popular music, but also for initiating a young man named Conniff to the mysteries of the essence of pop music – the beat.

After Ray left the “Skippers” he moved to New York and auditioned for Bunny Berigan’s orchestra as arranger/trombonist. He was hired on the spot and spent two years working with the other greats in the band like Gcorge Auld, Joe Bushkin and Buddy Rich. While with Berigan, Ray was heard by Bob Crosby and immediately offered a job with the famed “Bob-cats.” By 1940. Ray was making quite a name for himself in music circles as an arranger and composer. It was for this ability, as much as for his virtuosity on the trombone, that Ray was signed to the Artie Shaw Orchestra, then one of the three top bands in the count.

During his five years with Shaw, Ray did some of his best writing. Many of his compositions were recorded by Shaw and some of them like Just Kiddin’ Around, Jumpin’ On The Merry Go-Round and Prelude In C Major are still popular. One of his best arrangements for Shaw was the Gershwin tune, S’ Wonderful, which today is synonymous with the “Ray Conniff Sound.

After Artie Shaw, Ray joined Glen Gray as a straight arranger. Unfortunately, while many of Ray’s arrangements and compositions were performed live and on the air, none were ever recorded by Gray and are now lost forever.

Ray’s next job was with Uncle Sam, who for two years utilized his talents for the Armed Services Radio Network. After his discharge, Ray went to work for Harry James.

It was while working with tonics that Ray Conniff was first introduced to Columbia Records. Ray arranged many of James’ best records including the hit version of September Song. After nearly three years with Harry James, the musical monster known as be-bop reared it ugly head and Ray’s impeccable taste prevented him from arranging this new music.

The next two years were the most difficult of Ray’s musical career. Yet at the same time they were among the most productive, for it was during this time that Ray began to examine the makings of a hit record. While working at other jobs. Ray’s musical appetites were sated by the dissection of hit singles. He asked himself why one record is a hit while others never make it. After three years of investigation and study, he hit on a formula for arranging that he knew could be instrumental in producing hit records. Unfortunately, he found it difficult to sell his ideas to a record company. It wasn’t until the early 50’s when Ray met Mitch Miller, Director of Artists and Repertoire for Columbia, that things began to happen.

Miller, convinced that Ray was on to something, gave him a chance. On the third Conniff-arranged single it happened: Don Cherry’s Band Of Gold became a smash hit. This started a series of Conniff-arranged singles that reads like a Who’s Who of all-time hit records: Johnny Ray’s Walkin’ In The Rain sold over a million; Frankie Laine’s Moonlight Gambler sold nearly that number; Guy Mitchell’s Singin’ The Blues went over three million, knocking Elvis Presley out of first place on the charts: Marty Robbins White Sport Coat was one of his biggest hits and Johnny Mathis’ Wonderful, Wonderful, Its Not For Me To Say and Chances Are are history.

Shortly after his success with Band Of Gold. Ray recorded his first Columbia album. He dusted off his old Artie Shaw arrangement of S’ Wonderful added orchestral voices. put in all his arranging ideas and the “Conniff Sound” was born. Since that first I.P. Ray Conniff has recorded many goat albums. Seven of them hoot received the coveted Gold Record Award.

Because his very first, and succeeding albums have been such great successes. Ray has been termed an “instant success” by some. Nothing could be further from the truth. like all great artists, musical or otherwise. Ray has matured and improved like a fair wine. His years of service to the great bands in the count, coupled with his inherent musical genii., have resulted in his deserved recognition. The magical “Conniff Touch” transcends musical fads and fortunately for our, and future generations, it will be preserved for years to come in that piece of vinyl between these two pieces of cardboard.