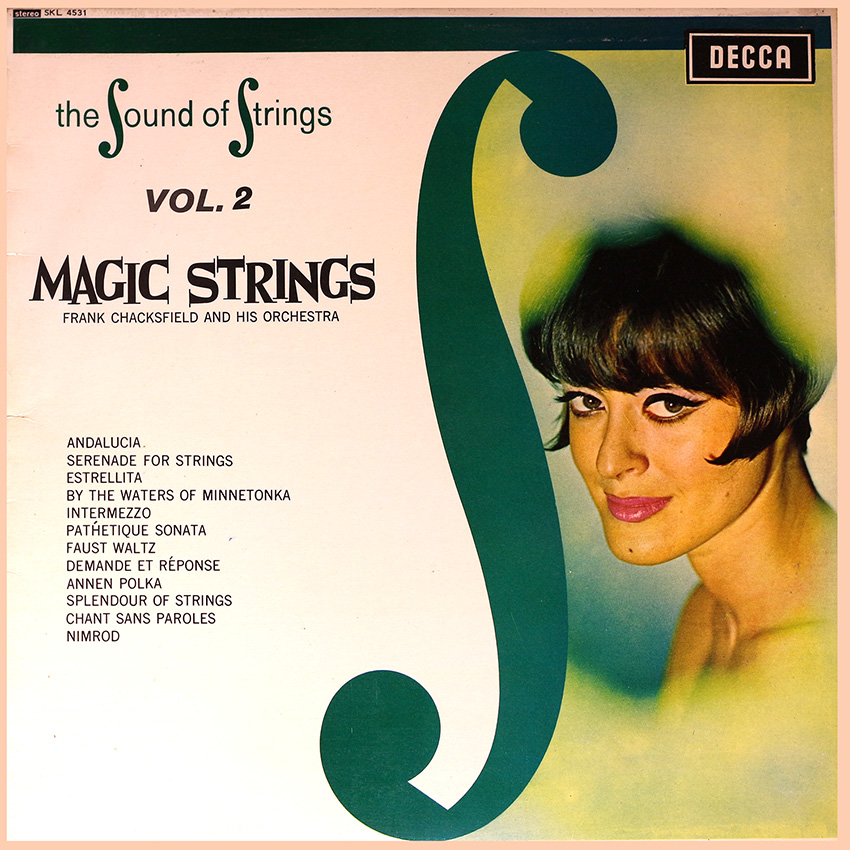 Music hath charms…” so the saying goes, and the particular magic engendered by symphonic strings has long been a source of fascination for the compositorial fraternity. Bach, Mozart, Dvorak, Tchaikovsky, Stravinsky – indeed almost all great men of music have at one time or another succumbed to the spell of writing for strings alone. In this Chacksfield concert, a dozen favourites, some originally for strings, others transcribed for the occasion, are all garbed in sumptuous sonal colours, and offered in delightful demonstration (to borrow one of the titles here) of THE SPLENDOUR OF STRINGS.

The magic curtain rises with a romantically inclined Mexican song to “The Star of Love.” Written in 1914 by Manuel Ponce, it zoomed to such enormous popularity that the poor fellow spent the rest of his life trying to prove that he was really a serious, classical composer.

Sonatas, concertos, suites and all manner of shorter pieces came tumbling from his pen, but it was no use – Ponce continued to be known almost exclusively as the composer of ESTRELLITA. An interesting sidelight: just four years before he died, Ponce finally swung over to the If-You-Cant-Beat-‘Em-Join-‘Em philosophy, and used his graceful melody as the theme in the second movement of his “Violin Concerto.

In the autumn of 1880, Tchaikovsky found himself working concurrently on two pieces, “a very noisy Overture. (as he himself described his now-famous “1812”) and the gracious SERENADE FOR STRINGS which was to become one of the few scores thoroughly to satisfy this most self-critical of composers. Of the four movements in the “Serenade, the lilting “Waltz” has most endeared itself to concert audiences and no wonder – it is among Tchaikovsky’s sunniest, most elegant melodies. The gently melancholic CHANT SANS PAROLES is a each earlier work (opus 2, to be exact), a musical souvenir of a summer vacation Tchaikovsky spent at Haspal. Just what prompted this “Song Without Words”. is, of course, a matter of conjecture; judging from the melody, it must have been something – or someone – very beautiful.

In lighter vein comes a brief sojurn BY THE WATERS OF MINNETONKA, published in 1914 by Thurlow Lieurance, noted musicologist, scholar, and expert on the subject of American Indian culture. Lieurance actually lived for some years with various Indian tribes, and titles such as “Water Moon Maiden”, “Hymn to the Sun God” and “Medicine Dance” abound in his musical output. Of all his works echoing the idiom he loved so well, though, only the winsome, sinuously attractive “Minnetonka. has retained its hold on the public.

Ernesto Lecuona was Cuban, but his musical thoughts took him often back to the mother country of Spain, and rarely with more success than in his tonal tribute to ANDALUCIA, city of gardens and fountains, and last of the Moorish strongholds. First as a piano piece, then in orchestral transcription, and eventually in popular guise (as “The Breeze and I”), Lecuona’s buoyant tune has become an international classic.

Our musical peregrinations take as next to England, where in one of his more waggish moments, Sir Edward Elgar penned a set of “Enigma Variations,” each being no less than a portrait in sound of one of his friends. Thus the serenely noble pages devoted to NIMROD, the\”mighty hunter” of the Bible, actually comprise a loving sketch of August Jaeger, himself an ardent huntsman, and also the author of the notes for Elgar’s oratorios. It seems that Jaeger had an especial fondness for the also movement of Beethoven’s “Pathetique” Sonata; with typical solicitude, Elgar included a fleeting allusion to it at the beginning of his variation.

Beginning the second half of the programme, we ESCAPE TO HAPPINESS, via Heinz Provost’s haunting theme for the 1939 film “Intermezzo. Movie fans will need no prodding to recall the tearful tale of a violinist and pianist who made beautiful music together in more ways than one; certainly the magic of the performances by Ingrid Bergman and the still-mourned Leslie Howard, and the enchantment of Provost’s “Intermezzo” music combine to make a cherished memo.

In addition to supporting his mother after his father ran out on her, Johann Strauss Jr. dedicated to Anna Strauss one of his most engaging miniatures, THE ANNEN POLKA. If the truth be known, Papa Strauss wrote an “Annen Polka” too, in his younger and (we may presume) happier days, but as so often was the case, his efforts paled in the light of his son’s genius.

The poignant melancholy of the slow movement, of Beethoven’s 8th Piano Sonata, the celebrated PATHETIQUE, marks for many the epitome of the composer’s melodic gifts (see “Nimrod”, above). Purists may well cavil at its expansion to orchestral proportions (although no less a luminary than Walter Piston per-formed the same operation with the first movement of the “Moonlight” Sonata), but such moot questions of propriety seem to be swallowed up by the pervading glory of Beethoven’s music.

After DEMANDE ET REPONSE and SPLENDOUR OF STRINGS, gently lyrical pieces of great warmth but little substance, both of which may properly be listed under the convenient catch-all of “mood music”, the programme closes with the most famous of the several waltzes which help propel FAUST on his may to the nether regions. As you may recall, Faust made a bit of a deal with Mephistopheles, gaining youth, riches and the pretty Marguerite, only to find that you can’t take them with you, even down below. Still, if you have to go, what better way than to the strains of this most elegant of French waltzes.