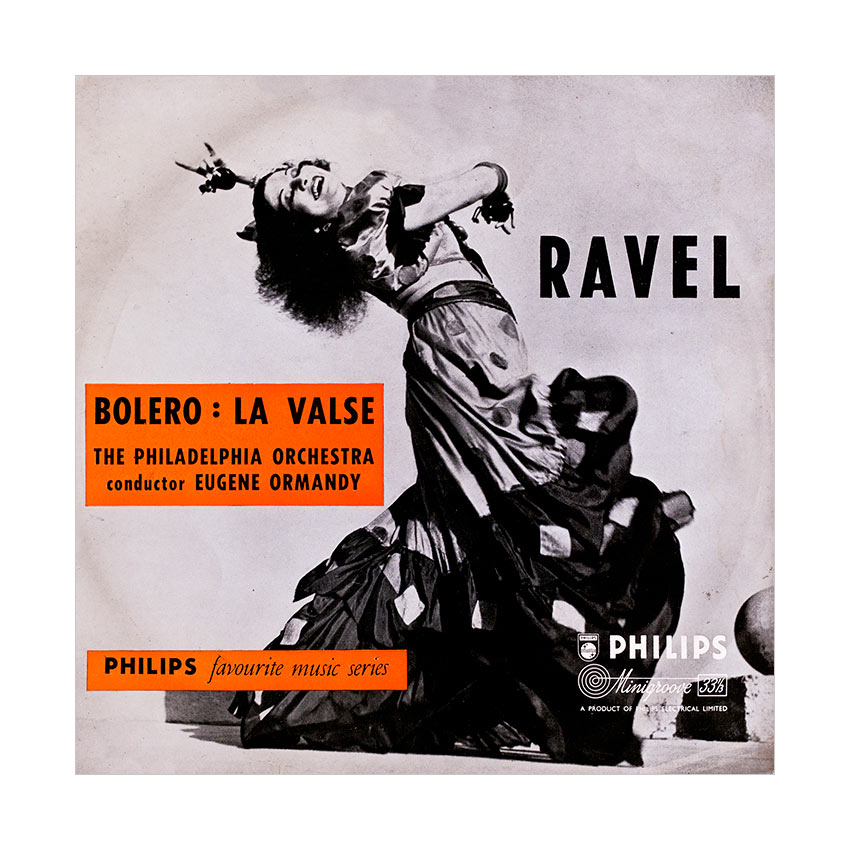 Ravel’s Bolero was commissioned by the dancer Ida Rubenstein, and was originally presented by her in Paris during 1928. In its original form it was a dance pantomime with a Spanish setting, and Ida Rubenstein, portraying an attractive and exotic Spanish dancer, was seen dancing on a table top at a Spanish inn. As the men watched, her dancing became more animated, the excitement rising as they beat out the rhythm with their hands and their heels until the great final crescendo was reached. At this point knives were drawn and the episode finished in a wild and riotous brawl.

The piece caused a sensation at its first performance, and when Toscanini played it for the first time in America, there were scenes of wild enthusiasm in Carnegie Hall. Subsequently Bolero went into the repertoire of every symphony orchestra and shortened, often vulgarised, versions were churned out incessantly by the dance-bands. Hollywood caught the Bolero fever and made a film around the piece – or rather a section of it! This composition has always been a favourite target for the critics, but Ravel was very emphatic in pointing out the limitations of this work, which he realised all too well. He wrote “I am particularly desirous that there should be no misunderstanding about this work. It constitutes an experiment in a very special and limited direction . . . it is a dance of steady movement and absolute uniformity as regards melody, harmony and rhythm, the last incidentally beaten out on the side-drum. The one point of variation is given by the orchestral crescendo .. . I have written a piece lasting 17 minutes and consisting wholly of orchestral tissue without music, of one long very gradual crescendo . . . it is for the listener to take it or leave it.”

La Valse (1920) was also first conceived as a ballet and received its premiere in Paris towards the end of 1920, the choreography being created by Fokine. An earlier performance had taken place in Vienna, where Ravel had played the work as a piano duet: His partner was the Italian pianist and composer, Alfredo Casella, who has told us that Ravel drew some of the material for this “poeme choreographive” from sketches for a tone poem to be called “Wien,” which Ravel had had in mind some three or four years previous. Casella has also stated that the composer drew certain inspiration from a poem which fell into three sections: The Birth of the Waltz – The Waltz – the Apotheosis of the Waltz.

Ravel heads the score with a preface: “At first the scene is dimmed by a kind of whirling mist, through which one discerns, vaguely and intermittingly, the waltzing couples. Little by little, the vapours disperse, the illumination grows brighter, revealing an immense ballroom filled with dancers; the blaze of the chandeliers comes to full splendour. An Imperial Court about 1855:” From a vague and almost intangible opening Ravel works up fragmentary melodies and mere suggestions of musical ideas into a dazzling and colourful kaleidescope of sound. There is, none the less, underlying this superficial brilliance, a bitterness and cynicism which seems to reflect the composer’s view of Imperial Vienna in its decadence.