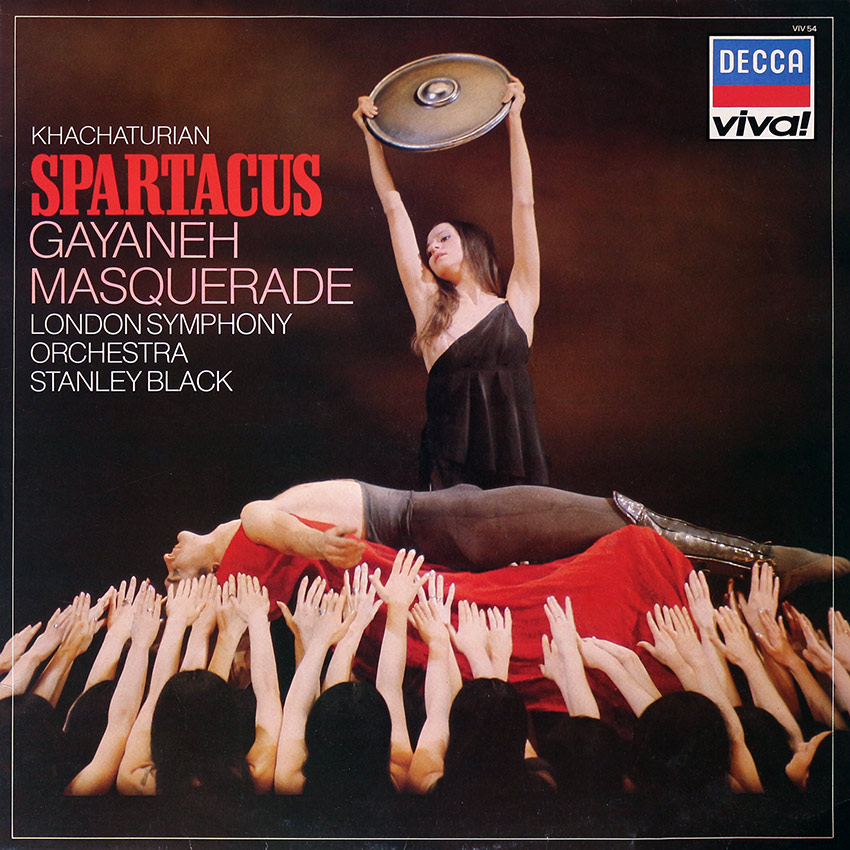 The Decca viva! label was a popular one among classical music lovers re-packaging older recordings from the previous decades into a new format for the eighties. Most of the recordings were of a very high quality and the cover notes were usually presented in English, German and French.

Aram Khachaturian is one the select few twentieth-century composers whose music appeals to serious concert-goers and the general public alike. His use of colourful, exotic harmonies and stirring rhythms, together with a unique blend of romantic lyricism and modern percussiveness, contributes to the pictorial quality of music that has captured the imaginations of audiences everywhere. It is not surprising, therefore, that Khachaturian also became a successful composer of film Scores and his talent for translating dramatic situations and emotions into music served not only the celluloid world but also that of the Russian ballet.

Gayarieh (a reworking of an earlier ballet, Happiness, and first staged in 1942), is set in the composer’s native Armenia, on a collective farm; it tells of the forces of good and evil, of the conflict between the heroine, Gayaneh, and her evil husband, Ghio. The five-movement suite on this recording opens with the famous Sabre Dance, includes Gayaneh ‘s hauntingly expressive Lullaby and ends with the tanrantella-like Lezghinka.

Khachaturian ‘s love and understanding of the theatre is displayed in his incidental music to Mikhail Lermontov ‘s play Masquerade. Of the live movements that comprise the concert suite (1944), the most celebrated is the opening waltz a splendid contribution to the Russian waltz tradition of Tchaikovsky and Glazunov. Spartacus (1956) takes us back to the world of Ancient Rome. The music not only portrays the grandeur of the Roman Empire at its height, but also the troubled emotions of the slave-gladiator, Spartacus. Excitement, tenderness and passion abound but are nowhere to be found with greater intensity than in the romantic core of the work, the “Adagio of Spartacus and Phrygia.