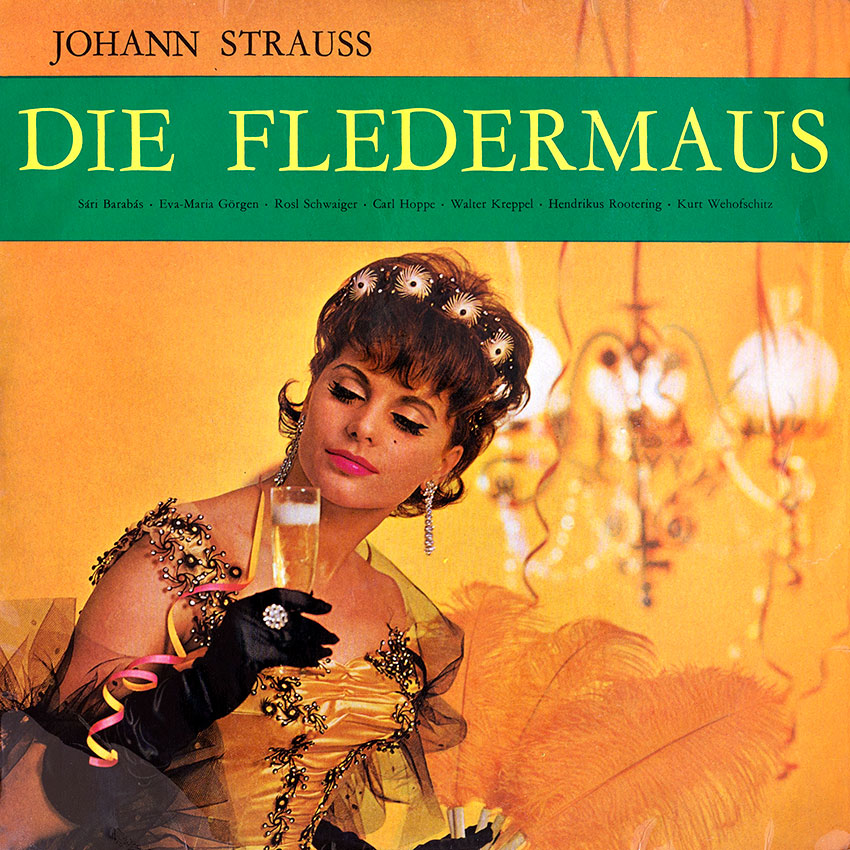 It was in 1863 that the history of the most perfect of operettas might perhaps be said to have begun. That year the Concordia, a journalists’ club in Vienna, had invited both Johann Strauss and the great Jacques Offenbach to contribute a new waltz to be played at their carnival ball.

Both obliged, Offenbach with Abendblatter (Evening Papers), Strauss with Morgenblatter (Morning Papers). The later edition was generally considered to be the better offering, perhaps because Offenbach was already a musical celebrity, although it is the Strauss waltz that is now remembered. After this friendly rivalry the two composers, who had never met, happened to find themselves sitting together in a restaurant. In the middle of a polite conversation, Offenbach said, probably with all sincerity ; “You ought to write operettas, you have the stuff in you”. He could hardly have looked forward to a time when Strauss’ operettas would prove even more popular than his own.

The logic of his statement had no effect until after a visit to Paris in 1867, when Strauss, after much pressure from his wife and friends, at last wrote Die Lustiger Welber von Wien. Unfortunately Strauss could not obtain the services of the leading lady he thought necessary to the production and the project was dropped. The world now waited until 1871 when Indigo und die vierzig Riluber was produced at the Theater an der Wien. It has a weak libretto, an Offenbach inspired score with only one Strauss waltz, but nevertheless attracted considerable attention. Der Karneval in Rom followed in 1873 and got contemporary approval, later to be forgotten.

The real truth of Offenbach’s prophecy came to light with Die Fledermaus, which was produced at the Theater an der Wien on April 5, 1874. With the exception of Der ligeuner-baron (1885) this was the best libretto that Strauss was ever to get in a long history of operetta writing, and he rose to the occasion with some of his most sparkling music. The original plot was born in a German comedy, Das Gefangnis, which was first turned into a Parisian vaudeville called Le Reveillon by Meilhac and Halevy and finally into Die Fledermaus by Richard Genee (also a composer of some standing) and Karl Haffner.

The Viennese cast included the celebrated Marie Geistinger as Rosalinde and it seems incredible that anything so vivaciously alive as Die Fledermaus could possibly fall flat. But perhaps the time was hardly propitious. 1873 had seen a great financial slump in Vienna, a depression that spread all over Europe, and there was much poverty and ill-feeling about. The champagne frivolities of Die Fledermaus were perhaps ill-timed. It managed 16 performances and then expired.

Put on in Paris, a city nurtured on the frivolities of Offenbach, it was an immediate success ; and even wilder acclaim followed in Berlin in June, 1874. The Viennese supporters, duly chastened, slipped Die Fledermaus back into the Theater an der Wien in September, and the public at last took this home product to its heart. It was a great success for Marie Geistinger, star of La belle Hélene and a director of the Viennese theatre; and a chapter of immortality for Strauss. The old hack, Karl Haffner, the bright young man, Richard Genee, and the waltz-king, between them, had triumphed.

The overture to Die Fledermaus is a sparkling potpourri made up of some of the operetta’s best tunes, an exhilarating portent of the rich entertainment to come. The curtain rises on the drawing-room of the house where the rich Gabriel von Eisenstein lives with his beautiful young wife Rosalinde. The first voice we hear is that of one Alfred, a professional singer and teacher, serenading the fair Rosalinde from outside the window, “Taubchen, das entflattert ist”, recalling their past amours. His efforts fall on unheeding ears, as the only person in the room is Adele the maid who is pre-occupied by a letter from her sister which suggests that she borrows some of her mistress’s clothes and comes to the grand ball to be held by Prince Orlofsky that evening. The singing at last intruding on her thoughts, she opens the window to shoo him away, Rosalinde entering just in time to remind Alfred that she is now a married woman – but she leaves a future meeting an open prospect, however. Adele now concocts a story of a sick aunt and asks for the evening off. The plans are only slightly complicated by the fact that Eisenstein is to go to prison for eight days, that very evening, a five-day sentence having been increased by the blunderings of his incompetent lawyer, Dr. Blind. This involves some heated discussion between Blind, Rosalinde and Eisenstein “Nein, mit solchen Advokaten”. However, his friend, Dr. Falke, appears and suggests secretly to Eisenstein that he should at least enjoy himself at the ball that evening under the name of Marquis Renard ; Dr. Falke has a spiteful little plan in mind. They imagine the gay time they are going to have – “Ein Souper uns heute winkt”. Rosalinde sees a chance also to have a gay time with her old flame Alfred but now has to pretend great sorrow at her husband’s imprisonment; Adele is covering up her own little plans with sorrow for her fictitious aunt; and Eisenstein thinks of the good time he will have. Each bemoans their fate while anticipating the evening in the famous “So muss allein ich bleiben” with its accelerating refrain “o je, o je, wie ruhrt mich dies”.

As Eisenstein and Adele depart, Alfred is quickly upon the scene. He dons the husband’s dressing-gown and fez and they merrily drink together for old time’s sake – “Glucklich ist, wer vergisst”. The prison governor arrives and discovers this situation ; so they have to pretend that Alfred really is Rosalinde’s husband —” Mein Herr, was dachten Sie von mir “. The governor advocates the joys of a cell, ” Mein schemes, grosses Voglehaus “, and the unfortunate man is taken off to prison.

The second act, in the ballroom, finds Prince Orlofsky extremely bored by it all. Falke enters and promises him some entertainment. In return for a prank Eisenstein once played on him, leaving him after a fancy-dress ball dressed as a bat in a drunken sleep by the road, to wander home in much ridicule in broad daylight – ever after to be known as Dr. Bat – he has contrived the Bat’s revenge. He has sent a note to Rosalinde suggesting she comes to the ball in disguise to see what her husband is up to. Orlofsky enters the spirit of the thing and declares he likes to see people enjoying themselves – “Ich lade gem mir Gaste ein” – “chacun a son gout”. Eisenstein, introduced as the French Marquis, is shattered to bump into his wife’s maid Adele, dressed in his wife’s clothes. Adele is equally surprised to find him there, imagining him in prison, but remains composed calling herself Fraulein Olga. She pretends to be indignant at being taken for a lady’s maid – ” Min Herr Marquis”. The next arrival is the prison governor, who should not be there either, disguised as the Chevalier Chagrin. He takes Adele for a grand lady and makes passes. Rosalinde enters, disguised by a mask as a mysterious Hungarian countess. Eisenstein, ever the one for a conquest, thinks that here is an easy one. Rosalinde decides to play him along, secretly most annoyed at his deception “Wie er gieret, kokettieret”. Eisenstein takes out his chiming-watch, always a fascinating weapon in affairs of this sort, and Rosalinde decides she must get hold of it for evidence. She swoons and asks Eisenstein to check her pulse, which he does rather un-successfully – and she manages to take the watch from him. Adele now challenges Rosalinde to take off her mask, Orlofsky enjoying the joke supports Rosalinde, and Rosalinde declares her true Hungarian birth in ” Klange der Heimat “. Eisen-stein, poor fish, tells once more the story of the bat episode, boasting that he has been too clever for Falke to get revenge. “We’ll see,” says Falke. They all sit down to dinner and Orlofsky praises the wine – “Im Feuerstrom der Reben” and Falke exhorts that they all be one big, happy family – “Briiderlein und Schwesterlein . . . Dui-du!”. All anxiously watch the clock as it strikes six – remembering their various appointments.

In the prison, the third act finds Alfred singing in his cell attended by a very intoxicated warder. Frank, the prison governor, now staggers in and is revived by a cup of coffee. No sooner is he asleep than Adele and her friend arrive looking for the Chevalier Chagrin to confess that Adele is only an un-sophisticated lady’s maid “Speil ‘ich die Unschild vom Lande”. Next the phony Marquis comes, Eisenstein arriving to give himself up. Adele and her friend are hidden away. Frank explains he is the prison governor, but when Eisenstein tells who he is, says he can’t be as he arrested him last night. Dr. Blind arrives, and while Frank goes for the prisoner Eisenstein takes Blind’s coat, wig and spectacles and disguises himself as the lawyer, pushing Blind out of the way. Enter Alfred in Eisenstein’s dressing-gown. At this moment Rosalinde comes in, heavily veiled. The deceptions and Falke’s joke are all revealed after much confusion and heart-searching, with Eisenstein eventually coming off worse. “O Fledermaus”, they all beg, say it was all a joke. In the end, as no one was without some disgrace, they decide that the champagne was to blame, ” Champagner hat’s verschuldet “, and under its lingering influence all differences are settled and Eisenstein and his Rosalinde reunited.