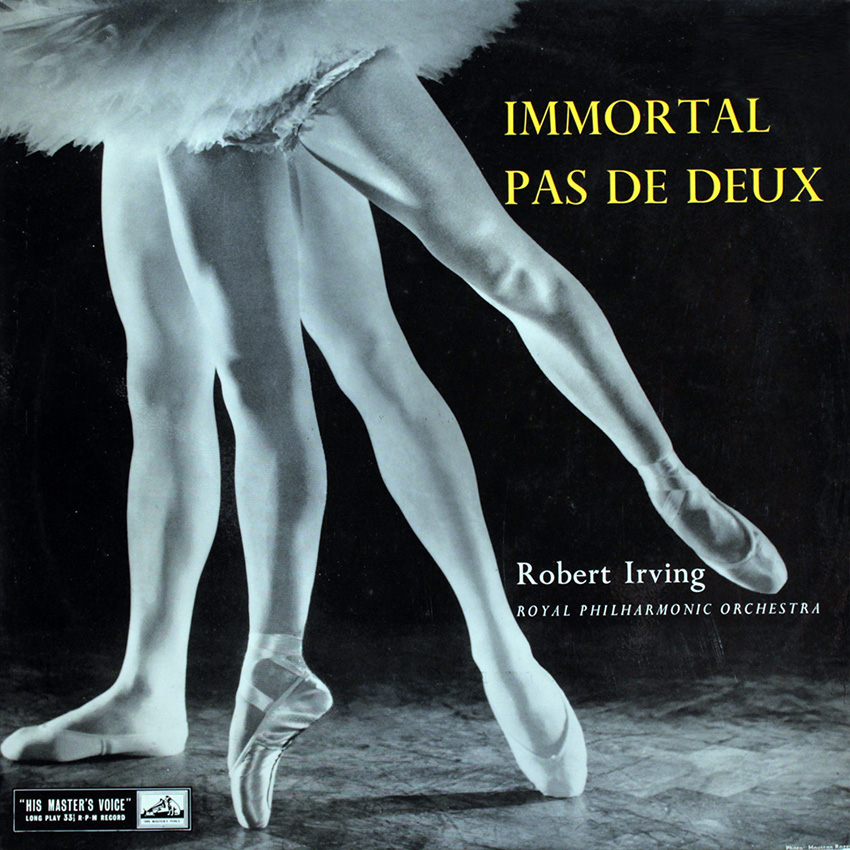 The extensive sleeve notes for this Immortal Pas De Deux record were written by Pigeon Crowle (Eileen Georgia Beatrice Crowle) artist, sculptor, authoress and ballet-composer 1903-1960. Not much else is known about her but that she wrote a lot about ballet. In 1959 you not only got a tasteful and attractive cover you also got an essay to read while you listened.

The pas de deux is the love song of the ballet, a duet of unspoken words, expressed in gesture, line, and harmonised movement. In the great classical and romantic ballets it is the high-light of an act, a coloratura passage in which the grace and beauty of the ballerina is contrasted with the chivalry and strength of her partner, the danseur noble.

“How light she is!’ he seems to say as she soars from his arms into the air; or, as he supports her in an arabesque — “How graceful” and as, with her hand laid on his, he slowly sums her poised on one elegant leg —”How beautiful!” The art of the classical ballerina is one of great beauty, but in the pas de deux, if aided by a partner of understanding and artistry, it shines with increased brilliance. But it depends to an extent, not generally realised, upon the ballerina being supported with knowledge and skill, and if these attributes are missing his performance will inevitably suffer. Her partner must watch for the slightest sign of insecurity, and be able to adjust her balance in all supported steps without any appearance of effort or strain, and without drawing audition to himself.

She must assist him with her response and timing, her taut springiness. In this way, working in complete unison and with subtle interplay of emotion, the pas de deux performed by two great artists is an exciting theatrical experience. As all emotions and feelings may be expressed in ballet, so they are reflected in the pas de deux. Those recorded here vary from the poetic to the flamboyant, from the light-hearted to the tragic, but all are set within the beautiful framework of the classical ballet. The pas de deux of the first act of Giselle in which Giselle dances with her lover Albrecht, has never been equalled for its delightful expression of youthful loss and happiness. The choreography is simple and devoid of all acrobatics or sensational lifts, but the gay and tender atmosphere of the scene is beautifully portrayed in its light and lilting movements. The love theme, given by strings and woodwind, recurs throughout the ballet — later, most tragically. Giselle was first performed in Paris in 1841, but still provides the most coveted of ballerina roles. Alicia Markova has become almost legendary in a part which she endows with her own unique qualities of romantic and remote fragility, while Anton Dolin, virtuoso of the art of partnering, has never been excelled as her Albrecht.

In the old classical ballets, the pas de deux (or grand adage as it is sometimes called) usually begins with an introduction for the two dancers, followed by one or two variations for each and a coda in which both join. Fokine, creator of modern ballet, revolted against many such conventions, and in his ballet Les Sylphides, the two principals have no sharply divided solos, but a dance that flows in an effortless continuity. Their entrance is particularly beautiful. He has begun to lift her in the wings, and she is still rising as they come into view. This creates the illusion that she might float away but for her partner’s restraining arms. Beryl Grey, with her soft, fluid line and gentle romanticism, gives a perfect performance in this ballet. When, however, Delibes’’ Sylvia was revived by the Royal Ballet in 1952, the choreography, by Frederick Ashton, included the grand adage in all its traditional glory. Tender and caressing, brilliant and exciting, soaring ecstatically with the solo violin, it is a love song designed to display the great art of Margot Fonteyn and the qualities of Michael Somes as dancer and partner. It comes as the climax of the third act, and there is a thrilling moment in the coda when, arrow-like, Sylvia flies through the air and appears to reverse her position in full flight just before Aminta catches her. The pas de deux from Casse-Noisette is one of the most beautiful ever devised. It combines a lyrical sweetness with classical virtuosity and precision, and commences in a quiet tempo quickening with the music which includes the bell-like tones of the celesta. Swiftly the ballerina runs towards her partner who takes her hand and draws her proudly through the air in a series of scintillating lifts, while the music mounts with a passionate and aching intensity unusual in classical ballet — indeed, it was adversely criticised by earlier audiences, who found it strange and disturbing. Casse-Noisette was the last ballet music written by Tchaikovsky, for he died in 1899, less than a year after its production. This adage can only be performed by artists of high distinction, and Belinda Wright and John Gilpin dance it with the delicacy and crispness of spun sugar.

Very different is the arrogant, flamboyant dance from Don Quixote, with its brilliant classical steps coloured in Spanish style. In Russia the ballet has remained in continuous performance ever since it was first produced in 1869, but in the West it is only known by this show piece for the ballerina and her partner. That dark beauty, Tamara Toumanova, and the lithe and elegant George Skibine, will long be remembered for their performance. What feats of virtuosity she displayed with no more apparent effort than a flick of her eloquent fan! With what panache he danced his variation, and partnered his dazzling ballerina in her scarlet tutu! Minkus’ music is the perfect accompaniment for this period piece.

The pas de deux performed by the dolls in La Boutique Fantastique is that lively French music hall dance, the Can Can. In their secret life whim the shop is closed, the dolls are lovers; but now they perform for the benefit of the customers, whirling their legs in the air, lifting their knees high and throwing back their heads with much jauntiness. The dance ends abruptly and, with a shake of her foaming white petticoats, the lady sinks to the ground in the “splits “, while her raffish partner runs to her side and whispers in her ear. The choreography for this dance is as sparkling and exhilarating as its music, and it comes from one of the most famous of Massine’s works. When he staged it for the Royal Ballet after the war, nineteen-year-old Moira Shearer was the gay, provocative doll and Massine her expert, agile partner.

To see Galina Ulanova partnered by Yuri Zdanov in Romeo and Juliet one of the great experiences of balIet-going. The pas de deux of the balcony scene is a symphonic picture in which the Juliet and Romeo themes are interwoven and the whole is a romantic reverie of small, gliding steps, interspersed with arabesques and — in the Bolshoi tradition — spectacular lifts. It is accomplished with an effortless ease by these two superb artists, who invest their roles with all the tragic poignancy and tender romanticism of the young star-crossed lovers.

The Aurora pas de deux from the last act of The Sleeping Beauty is the most famous of all the classical adages and of a most noble and brilliant description. The two silver and white figures make their sudden and dramatic appearance at the back of the stage and then advance with gracious yet imperious dignity to begin their breath-taking dance. This ends with a spectacular series of pirouettes and ” fish dives” to an accompaniment that mounts in excitement and finally dies on a sustained flute note and plucked strip, It is followed by a delicate solo on pointe for the ballerina and an exhilarating variation for the danseur. Every great ballerina has danced this adage, but none with more royal radiance than the lovely Svetlana Beriosova in her first great classical role at Covent Garden. For the audience it was an evening of enchantment. For her it was a wonderful yet terrifying experience, but in the assured hands of Michael Somas she triumphantly overcame all difficulties.

In all these dances the choreography owes much to its musical setting. Though so varied, all share a well-defined rhythmic line and a clear and vivid characterisation, which is inspiring to the dancers and carries the audience with them in the spell of the immortal pas de deux.