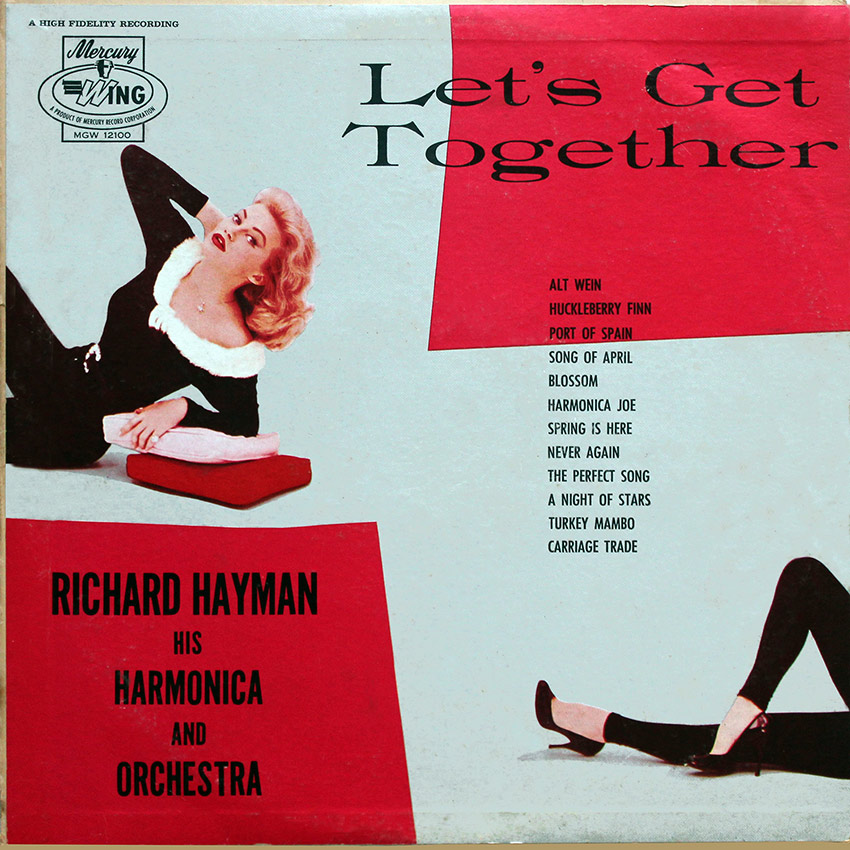 “Like the selection of drinks on the menu of a swank cocktail lounge, this selection of music for after 5 P.M. relaxation runs the gamut of pleasure“. Well who is going to argue with Richard Hayman and His Orchestra? My only doubts are the swankiness of the lounge and whether 5pm is a little too early for such a gamut of pleasure. Regardless, this example of harmonica infused Long Player joy from Richard Hayman would no doubt have lifted many a mood around 1954. The front cover model has been cut in two and placed on opposing sides. Listen to some of this smooth fifties sound below.

Like the selection of drinks on the menu of a swank cocktail lounge, this selection of music for after 5 P.M. relaxation runs the gamut of pleasure. If you’re the straight highball type, enjoy the plait and simple relaxation offered by Spring Is Here. If you delight in the creamy luxury of a Grasshopper, try the richness of Port of Spain. For those who delight in vintage, there is Alt Wein. Melody for every taste and temperament, designed to wear off the day’s tensions, is Haymon’s “Mission Accomplished.” Richard Hayman’s harmonica is interwoven into many of the melodies like the tinkling, cooling ice chips that put that extra sparkle into an evening’s drink.

New England born and bred, Richard Hayman is a self-taught harmonica player and musical arranger. At 18 he joined Borrah Minnevitch’s world-famed Harmonica Rascals. At 21 he became a member of the Vaughn Monroe group, doing a specialty novelty harmonica act. After several years, he joined the Horace Heidt troop, which eventually brought him to Hollywood. Here he played bit roles in a score of musical films, and gained further experience arranging under the expert tutelage of George Stoll. Hayman, himself, has composed such outstanding instrumentals as Skipping Along and No Strings Attached, Huckleberry Finn and Carriage Trade which were also composed by Hayman are part of this WING Long Play album.