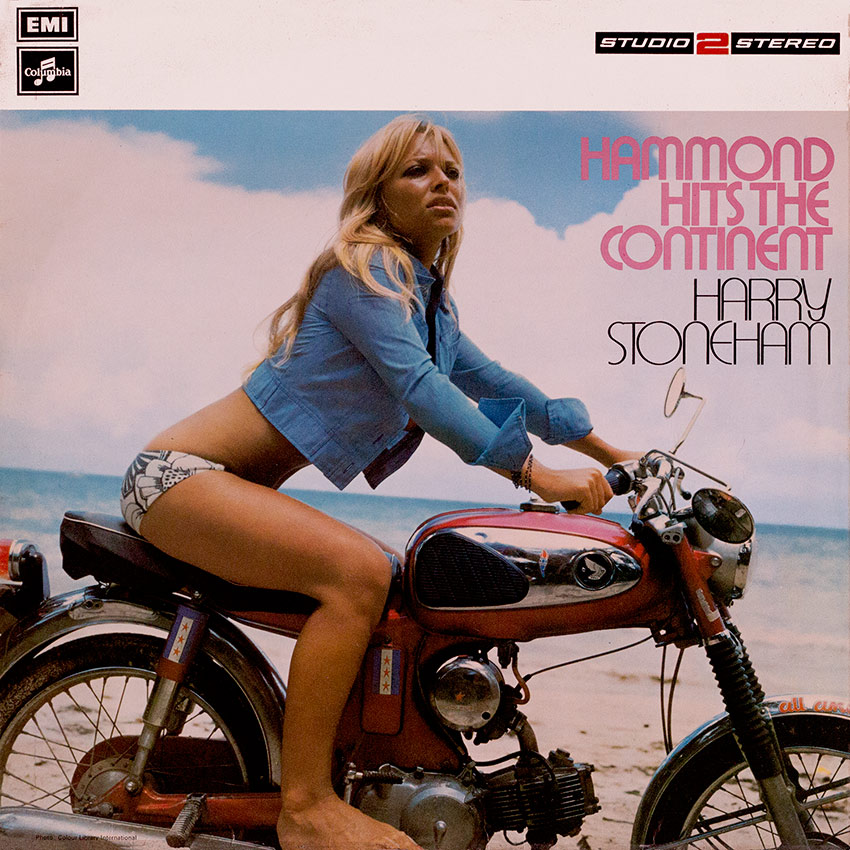 Harry Stoneham probably gained most fame from his theme tune for the UK’s chat show legend Michael Parkinson. Every week his theme opened the show but few ever got to hear the full version. You can now hear it below if you wish together with an example of his work on this marvellous record which was recorded in the same hallowed rooms that gave the world Sgt. Pepper’s Lonely Heart’s Club Band. The cover features model Suzy Shaw who graced many a cover during the seventies including several Top of the Pops covers featured here in Cover Heaven such as this

It is apt (though coincidental) that this album should have made its debut in the year of Britain’s entry into the Common Market, as it forms a salute to the songwriters of Continental Europe.

Here are 27 superb tunes with the accent on those bright and bouncy two-beat melodies which sweep the Mediterranean discotheques and beaches each summer insidious tunes which we come back humming after lazy sunny fortnights in Majorca, France and the Algarve.

Yet back home, if you’re like me, you forget the title (and couldn’t pronounce it anyway); you never discovered the singer’s name, and your local record dealer is singularly unimpressed by your la-la-ing of the song in question! And a surprising number of Continental hits never find their way across the Channel, except to special import order.

Harry Stoneham and I thought a goodly cross-section of these tunes would make a pleasing format for a toe-tapping, sun-filled album. Many, of course. have found their way into the British hit parade too; one or two were even written in Britain yet achieved much greater success on the Continent than they did here.

Popcorn is somewhat surprisingly an American composition for synthesiser. It says much for Harry Stoneham’s mastery of his instrument that the ‘Popcorn’ sounds he produces on this disc are all from two electronic organs not a synthesiser in sight! But then I could fill a book with my admiration for Harry’s music. However, there isn’t enough space here so put on the LP and let that speak volumes!