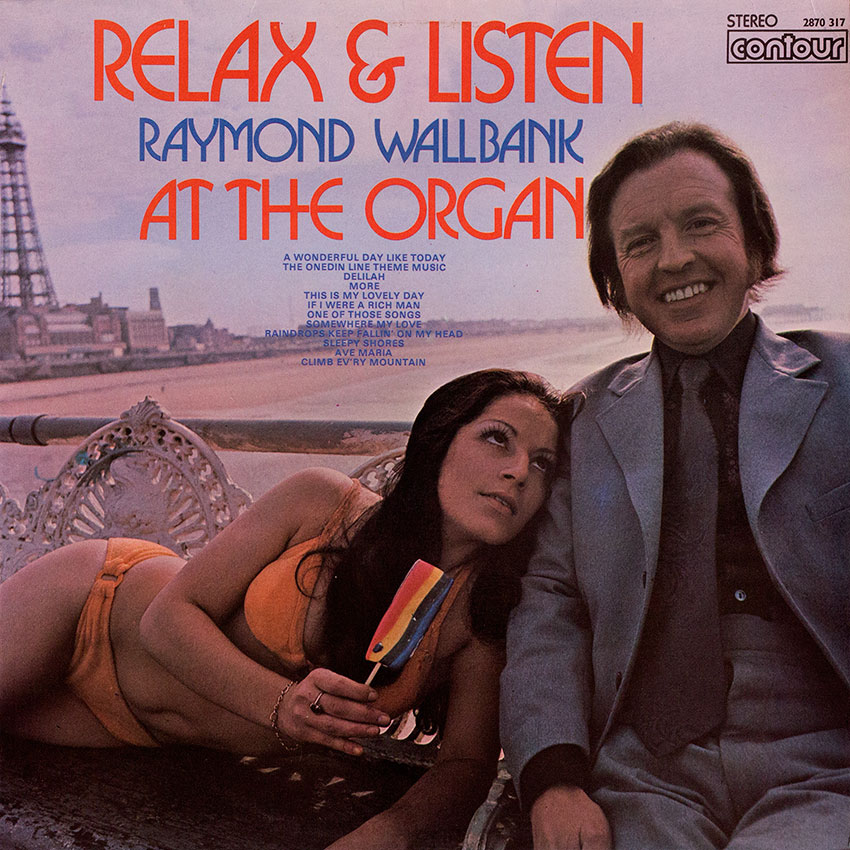 Raymond certainly knew how to relax. He simply sat, exuding man smells, on the pier at Blackpool and within minutes if not seconds scantily clad young women were drawn to him to like a bee to a flower. Look how she longs for his gaze, thwarted by his narcissistic love of the camera. Even the tempting offer of a lick on her lolly does nothing to tempt the organ man to look her way. Raymond by the way was a charitable guy with a kind heart when he wasn’t performing for his adoring audience (Mr and Mrs Bartholomew of Braintree) as the sleeve notes inform us – “Like many top-class artistes Raymond makes time to do special charity performances, including regular broadcasts for local hospitals.” To hear a sample of Raymond’s legacy see below.

As well as his popular programmes in the Sun Lounge on the North Pier at Blackpool Raymond Wallbank has also appeared as a concert organist in many parts of the country, including performances on the fine organ at the Gaumont, Manchester.

During the winter months Raymond plays for dances almost every evening. His recent engagements include appearances at the Floral Hall, Southport on the same bill as Victor Sylvester and his Orchestra and as successor to Reginald Dixon as organist at the official switch-on of Blackpool Illuminations carried out by Danny La Rue.

Like many top-class artistes Raymond makes time to do special charity performances, including regular broadcasts for local hospitals. He also took part in a special B.B.C. television programme about Blackpool, and has been heard on B.B.C. Radio programmes.

He is, of course, well known to many thousands of Blackpool holiday-makers and his twice daily organ recitals in the Sun Lounge have become a permanent feature of the North Pier summer-time entertainment in fact an important contribution to Blackpool’s wide range and variety of top class artistes appearing each year for the enjoyment of countless holiday-makers.

His special request programmes offering on-the-spot birthday, anniversary, or purely sentimental tunes, from the high-light of a programme content which caters for all ages and all tastes, recalling nostalgic moments for many patrons. His sense of humour and pleasant personality set the scene for a delightful two-hour concert of relaxed musical entertainment with, of course, the possibility of a sun-tan at the end of it! Why not try it for yourself when next in Blackpool.