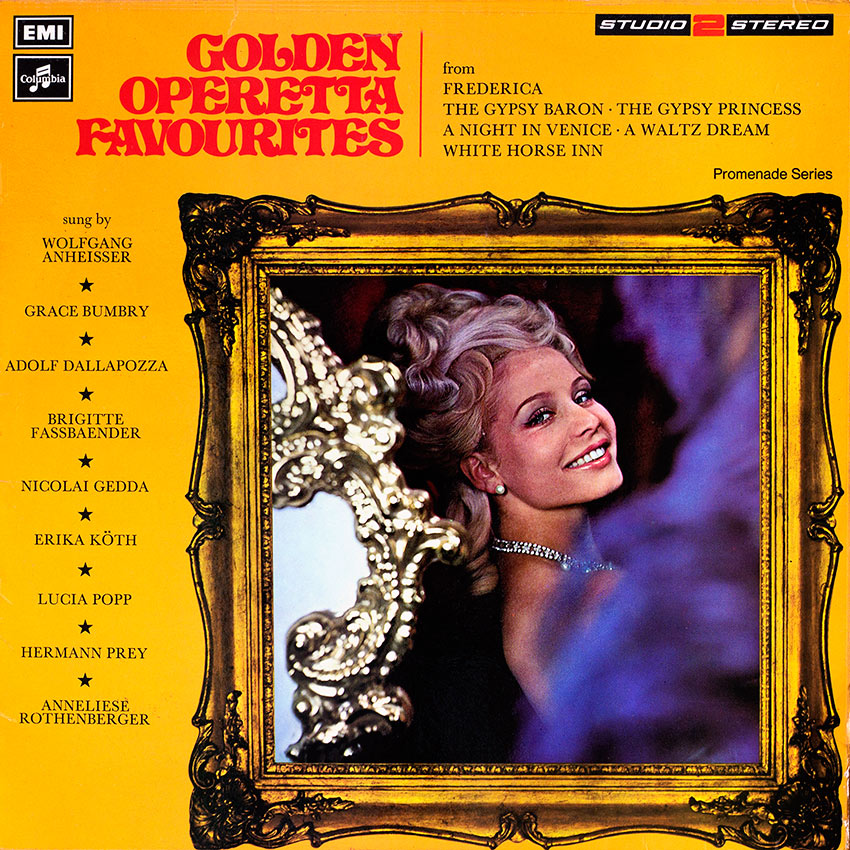 It is difficult to pinpoint exactly when that delightfully frivolous, melodic genre of operetta first blossomed as an offshoot of the great opera tradition. When, indeed, is an opera not an operetta—or vice versa? If pure entertainment value and tunefulness are the criteria then Mozart and Rossini might well be included in an operetta collection; certainly Donizetti with a light-hearted work like The Daughter of the Regiment; certainly the writers of a long string of opera-bouffe like Adam, Boieldieu and Auber. But most certainly Offenbach who most clearly made operetta a distinctive art-form in his little Parisian theatre Les Bouffes-Parisiens and is said to have whispered in the ear of Johann Strauss the younger, on a visit to Vienna in 1863—”You ought to write operettas”.

It was all these things that led to the writing of the greatest operetta ever penned—Die Fledermaus in 1874; and all the other riches of the Viennese operetta scene that are included on this record.

In Der Zigeunerbaron, first heard at the Theater an der Wien on October 24th 1885, Strauss found at last a first-rate libretto and, although the score has not the sustained perfection of Die Fledermaus many consider it his most substantial and best-constructed. The composer was sufficiently impressed by its possibilities to take great care with the writing, contrary to his usual carefree methods. A true Hungarian atmosphere is sustained, the story based on a charming book Saffi’ written by Maurus Jokai, the great Hungarian national writer whom Strauss had met in Budapest. Ignaz Schnitzer adapted the book well and inspired great romantic songs such as ‘So elend and treu’. Also first heard at the Theater an der Wien, on January 10th 1893, was Furstin Ninetta, possibly the weakest of his operettas but, as usual, containing items of the quality of Einst traumte mir’ to keep it in memory.

Karl Zeller (1842-1898) was a civil servant, artistic adviser to the Austrian Ministry of Education, and an amateur composer. Nevertheless, in Der Vogelhiindler (The Birdseller) he produced one of the freshest and most memorable of Viennese operettas, first performed at the Theater an der Wien on January 10th, 1891. Among its special delights the song Schenkt man sich Rosen in Tirol’ which is sung by Adam in gratitude for a bouquet of roses from his heart’s delight Christel.

Strauss was not the only composer to be inspired by Offenbach. Franz von Suppe was similarly led toward operetta by hearing Offenbach in Vienna and wrote Fatinitza with Zell & Genee, first produced at the Carl Theater on January 5th, 1876. Its famous march-trio was an immediate best-seller and at the time he rivalled Strauss in popularity. The setting of Fatinitza is Bulgarian but the music is indestructibly Viennese.

Emmerich Kalman (1882-1953) was a Hungarian whose operettas from title to content were generally full of the Magyar gypsy strain—especially Die Cscirdcisfiirstin (The Gypsy Princess) first performed at the Johann Strauss-Theater in Vienna on November 13th, 1915, with the celebrated Mizzi Guenther in the title role. London saw a production in 1921 at the Prince of Wales Theatre with Sari Petras starring. Eduard Kiinnecke (1885-1953) came from Lower Saxony and studied music in Berlin with Max Bruch, later becoming chorus-master at the Neues Operettentheater. He wrote over twenty-five operettas, Die blonde Liselott, produced in Berlin being one of the less well-known but producing an item that should become another operetta favourite. Karl Millocker (1842-1899) was a true Viennese-born writer of operettas, who intended to be a goldsmith but found his true bent in the theatre. He was encouraged by Franz von Suppe and had his great success with the work that Johann Strauss might well have written—Der Bettelstudent (The Beggar Student) first produced at the Theater an der Wien on December 6th, 1882. A sturdy, well-constructed score with an involved story set in Cracow, Poland in 1704. Leo Fall (1873-1925) was the son of a bandmaster and set out on a musical career at the age of 5, studied at the Vienna Conservatory and became conductor at theatres in Berlin, Hamburg and Cologne. Der fidele Bauer (The Merry Peasant) was first heard at an operetta festival in Mannheim on July 27, 1907. In the song ‘Red Lizzy’, a cowherd has taken her little boy Heinerle to a fair, but she has no money for the sweets and toys that he wants to buy. Oscar Straus (1870-1954) set out to be an academic composer but gradually drifted into the musical theatre and became a prolific and highly successful writer, still working hard at 80 when he wrote music for the film La Ronde. Ein Waltzertraum CA Waltz Dream’) was his best work, first heard at the Carl Theater, Vienna, on March 2nd, 1907. ‘Leine, ganz leise’, in which two young soldiers dream of Vienna and its pleasures, is one of its best-loved songs. Paul Lincke (1866-1946) was a Berliner whose musical experiences included a spell at the Folies Bergere in Paris. Of his many operettas Frau Luna, produced in Berlin in 1899, is one of those remembered for an enchanting waltz. It was heard in London in 1911 as Castles in the Air.

Robert Stolz (b. 1886) is the last great representative of the Viennese operetta tradition and has kept the genre alive with a prolific output of works in days when operetta is no longer a fashion. His greatest success was when he joined forces with the German composer Ralph Benatzky (1887-1957) to produce that sumptuous spectacular operetta Im weissen Ross! (‘The White Horse Inn’), first produced at the Grosses Schauspielhaus in Berlin on November 8th, 1930 and a tremendous success at the Coliseum in London the following. year. Robert Stolz was the conductor of The Merry Widow in its early days; which aptly brings us to a figure not yet mentioned. Johann Strauss, founder, and Franz Lehar (1870-1948), perfector of the Viennese operetta tradition make ideal end pieces to our story. Not even Die Fledermaus caused a greater furore than The Merry Widow as it enchanted the world after a shaky start in Vienna in 1905. If Lehar never equalled its sustained sparkle he was still to write a series of magnificent works. Friederike was produced at Berlin at the Metropol Theater on October 4th, 1928—one of the later works in which Lehar struck up a stimulating partnership with the great tenor Richard Tauber. In ‘O Madchen, mein Madchen’ the poet Goethe sings of his love for Friederike—but, alas, contrary to a strong tradition, the story ends sadly with unrequited love.

In a sadder and wiser world, operetta no longer thrives or is created. But its music, gay, sentimental and nostalgic, survives to bring moments of surreptitious enjoyment to those who like to escape now and then to a world of pleasant unrealities.