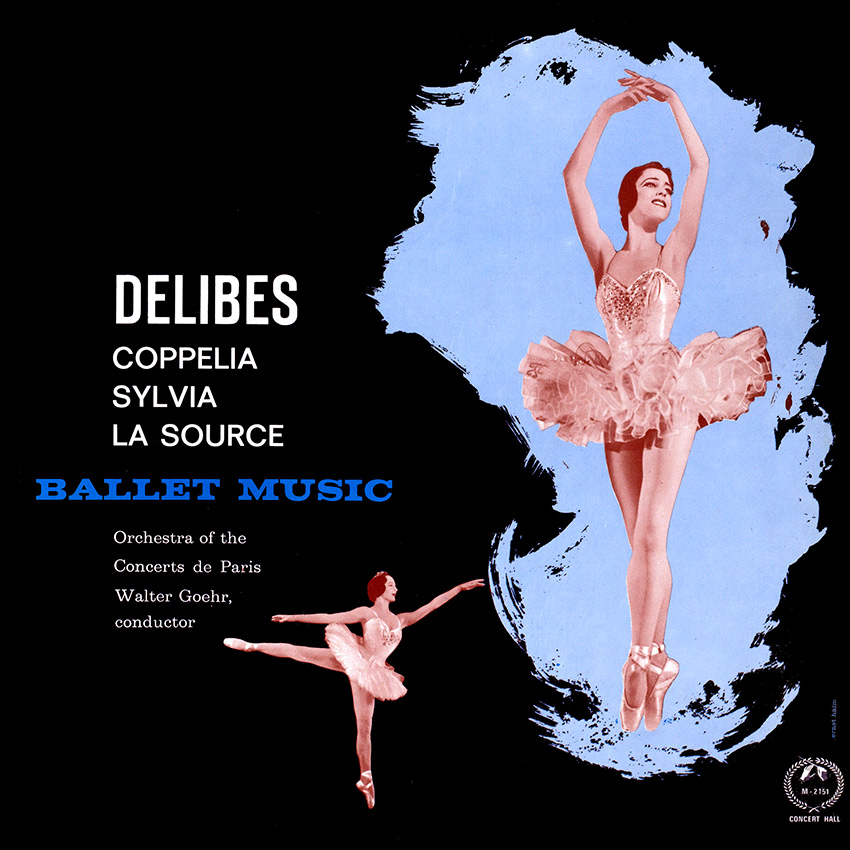 If ever you are haunted by an attractive, piquant tune which you cannot place—probably nineteenth-century French, too light-fingered for Gounod, not individual enough for Bizet or Massenet, yet far more so than Saint-Sans—you may be fairly certain that its composer is Léon Delibes. Indeed, hearing an unfamiliar score by him is like reading Hamlet it seems to be full of quotations.

Although one of the most skilful of stage musicians, he is often underrated. In the first edition of Grove’s Dictionary of Music and Musicians, he is not mentioned at all; his grand opera Lakiné is hardly ever given outside France, while even Sylvia and Coppélia had to wait for Diaghilev to make ballet respectable before they could attract any critical attention. But at least one great contemporary was ready to give Delibes his due —and more. Tchaikovsky described his own Swan Lake as “poor stuff compared with Sylvia“. He even rated the Frenchman above Brahms and Wagner. An exaggeration, of course, but understandable as the regard of one master-craftsman of the ballet to another.

A pupil of Adolphe Adam, Delibes began his career as a writer of operettas for Les Bouffes Parisiennes. His appointment in 1863 to the music staff of the Paris Opera led to a commission to com-pose the ballet La Source in collaboration with the Polish composer Minkus. His music compared so favourably with the hack-work of his colleague that he was invited immediately afterwards to write a divertissement to be inserted into Adam’s Le Corsair. He followed this up with a full-length comic ballet Coppélia, first produced in 1870; and finally came the climax of Delibes’ ballet career, Sylvia (1876), after which the composer turned his attention, less successfully, to grand opera.

COPPÉLIA—Prelude et Mazurka – Volts Lents -Theme slave varie – Czardas – Scene (“Nocturne”) – Musique des automates – Valse de to poupee – Valse des heures. Coppélia is founded on an idea suggested by E.T.A. Hoffmann’s sinister little tale Der Sandman,’ (which also forms the basis of Act I of Offenbach’s opera). It concerns an old man, Dr. Coppélius, who makes clockwork dolls. He lives in a village on the Hun-garian-Polish border—a fact of no particular significance except that it enables Delibes to introduce a Mazurka (No. 1 b), a Czardas (No. 4) and five variations on a song by the Polish composer Moniuszko (No. 3). Coppélius , it seems, has a daughter, Olympia, who is to be seen every day at his window reading a book. Swanilda, one of the village girls, tries to attract her attention in a graceful waltz (No. 2). Catching sight of Frantz, her betrothed, she hides, and is horrified to see him also making in-effectual advances to the girl. At nightfall (No. 5) Swanilda and her friends contrive to enter Coppélius . workshop, and discover the truth: Olympia is a doll. In their delight they set the various puppets working (No. 6). Coppélius arrives suddenly and chases the girls away; all except Swanilda, who takes refuge be-hind the curtain where Olympia is hidden. Mean-while, Frantz has climbed up a ladder and entered through the window. Coppélius catches him, makes as if to thrash him, then, with a sudden change of manner, appears to forgive the young man and offers him a drink. But the drink is drugged; Frantz falls asleep and then Coppélius’ design is made clear—he wants to transfer Frantz’s soul to the inanimate Olympia. What he does not realize is that the figure on the chair which he has wheeled from behind the curtain is no longer Olympia but Swanilda, who now makes a show of coming jerkily to life (No. 7). Coppélius’ joy soon changes when she begins to wreak havoc in the workshop. Frantz wakes up, and the two make their escape. Next day, during a ceremony in the village square, Coppélius demands justice; the burgomaster throws him a purse full of silver and that is the end of the matter. During the festivities which follow and which include the Dance of the Hours (No. 8), Frantz and Swanilda are married.

SYLVIA—Prelude et Les Chasseresses – intermezzo et Valse lente (L’Escarpolette) – Divertissement: Pizzicato – Marche et Cortege de Bacchus. Apart from a static first act, Coppélia has one of the most attractive plots in all ballet. The same can-not be said of Sylvia, a far more conventional Arcadian tale of nymphs, shepherds, gods and goddesses; hence no doubt its failure to remain in the general repertoire, although it is the most original and indeed symphonic of Delibes’ ballet score.

Amyntas, a shepherd, is in love with Sylvia, one of the huntress-nymphs of Artemis. Looking for her one day in the forest, he comes upon the troop of huntresses and takes refuge behind a statue of Eros. The nymphs dance in honour of the chase (No. lb), and there is a delicate solo for Sylvia herself (No. 2). Amyntas is discovered and forced to reveal his love, for which he blames Eros. Sylvia, appalled, draws her bow at the god’s statue, but Amyntas interposes him-self and is killed. Sylvia leaves indifferently, but not before the god has aimed an arrow at her heart. Soon she returns in a very different mood to pluck the arrow from her lover’s breast. She is seen by Orion, the villainous hunter, who carries her off to his cave. He orders a feast in her honour, at which, fortunately, he and his attendants drink too much to do her any harm. to the final act Amyntas, whom Eros has re-stored to life, is sitting disconsolately on the sea shore during a Bacchic festival (No. 4), when he sees a ship approaching. A veiled figure steps down from the prow and performs a dance to the accompaniment of Pizzicato strings (No. 3). It is, of course, Sylvia. Orion arrives soon after in pursuit of the nymph; but disaster is averted by the appearance of Artemis her-self, who shoots Orion and, reluctantly (for she is supposedly the Goddess of Chastity) gives her blessing to the two lovers.

LA SOURCE—Pas des Voiles – Andante – Variation – Danse Circassienne. Like Saint-Sans’ Yellow Princess and Bizet’s Pearl Fishers and Djamileh, La Source reflects the Oriental vogue which was one of the features of the Second Empire. The first act, to music by Minkus, describes how Djemil, a young hunter, prevents a wicked gypsy from poisoning a spring, then falls in love with a veiled woman, Nouredda, who is on her way to the palace of her betrothed, Khan of Ghendigil. She orders her attendants to bind him : but he is later re-leased by Naila, the fairy of the spring. At this point Delibes takes over, with striking effect. The scene is the palace gardens. Distant fanfares announce the arrival of Nouredda; and the Khan commands his dancers to perform in her honour. Here follows the four-movement divertimento given on the record. Although this score marks Delibes’ &but as a ballet composer, his touch is remarkably sure. Not even Borodin could have written a more seductively exotic Veil Dance; nor could Bizet have pointed the scoring of the Andante with greater piquancy. It remains to be said that Djemil eventually found his way to Nouredda’s proud heart with the help of the fairy Nails who. somewhat unfairly, is condemned to die to the tinkling banalities of Minkus.