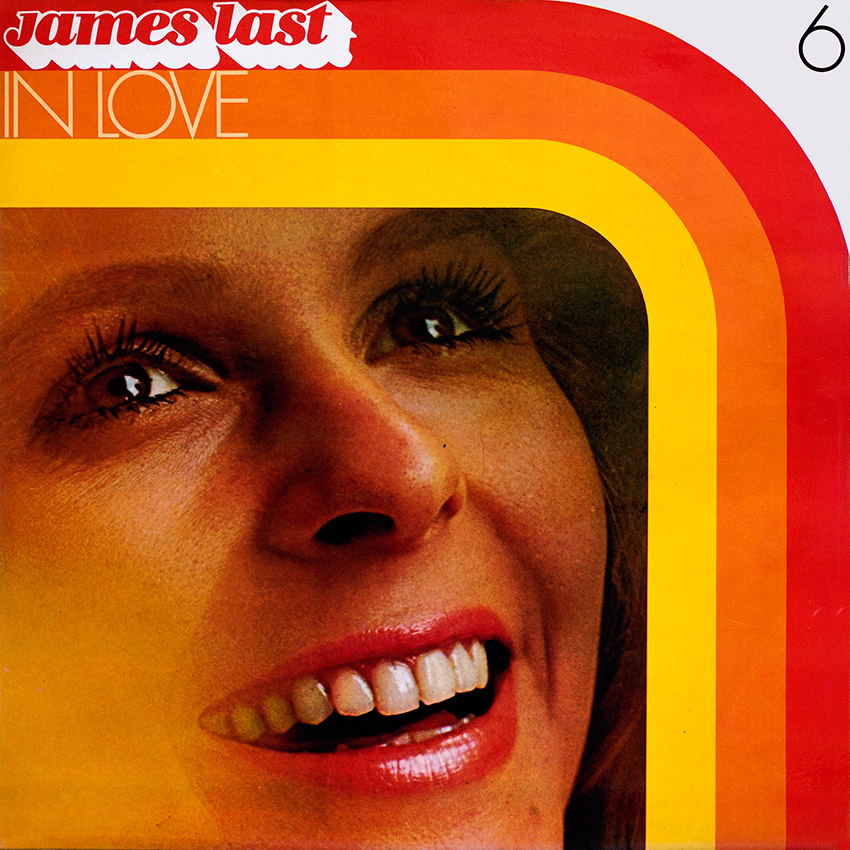 Love, they say, makes the world go round. The very same thing is often said of music, too. What could be more natural, then, than a happy combination of the two ? Here, with the ubiquitous James Last and his fine orchestra performing twelve excellent love songs, one could say that the world has never had it so good. Love, of course, has many faces and in this well-spiced selection James Last seems to have covered most of them musically.

The melodic grace of Time After Time – a long-time favourite written by Jule Styne and Sammy Cahn for the 1946 Sinatra musical film It Happened In Brooklyn—makes a fitting start to the programme. This is followed by James Last’s own hit composition of twenty years later, Games That Lovers Play – a song that brings a mature and pleasantly original twist to the adolescent taunting-and-teasing side of love. This song has been recorded by many artists all over the world but to hear the composer’s own version makes this an especially interesting track.

One of the cinema’s great love scenes provided the background for the clever merging of Moonglow and the theme from Picnic. While scoring the music for this fine 1955 film, composer George Duning was looking for a way to complement and intensify a dance sequence in which the leading characters—played by William Holden and Kim Novak—discover their love for each other. He hit on the idea of using the jazz standard Moonglow (which was composed in 1934 by Will Hudson Eddie de Lange and Irving Mills) and combining it with his own theme as an obligato for strings. The effect was not only dramatically stunning it also resulted in a multi-million selling single. It is also interesting to note, nearly twenty years later, that the song Moonglow is hardly ever played without Duning’s fine Picnic theme in attendance. On this occasion James Last offers a richly scored treatment of the famous musical tandem which moves at a slightly faster tempo than usual.

The first side of this disc is completed by two emotionally contrasting pieces—the exotic romanticism of Passion Flower and the impending disillusionment of You’ve Lost That Lovin’ Feelin’. The latter song was written in 1964 by record producer Phil Spector and the husband and wife team of Barry Mann and Cynthia Weill. It was recorded by the Righteous Brothers and subsequently became one of the biggest pop hits of the sixties.

Side two opens with the Academy Award-winning film song of 1953 Secret Love. Introduced by the irrepressible Doris Day in the musical Calamity Jane, it provided Doris with her fifth million-seller. In this version James Last has arranged the song in a very appealing way paying full regard to Sammy Fain’s superb melody. A somewhat more contemporary atmosphere is engendered by Last’s fine interpretation of Bob Dylan’s Mr. Tambourine Man, and this adds a pleasant touch of variety to the proceedings. Tambourine, of course, was a strong hit in 1965 for that popular group, The Byrds. The contemporary flavour continues simmering in Help Me Girl, before Last returns to the super-romantic swing of Close Your Eyes, a fine and well-loved standard which is usually associated with Tony Bennett who made a very successful recording of it back in the 1950’s.

One of the best known songs of the sixties Bart Howard’s elegant Fly Me To The Moon (sometimes known as In Other Words) makes an ideal vehicle for the arranging talents of James Last who, in this treatment, brings out all the lively elements of romantic fantasy implied by the title. Finally, having run the musical gamut of emotions connected with this crazy thing called love, James Last and his fine musical organisation strike a joyously optimistic note for the finale with their version of the recent Andy Williams hit Happy Heart.

If it is true to say that both love and music make the world go round, then it is a pretty safe bet that the world of James Last will continue spinning for many years to come … at the agreeably romantic speed of 33 1⁄3 r.p.m., of course.