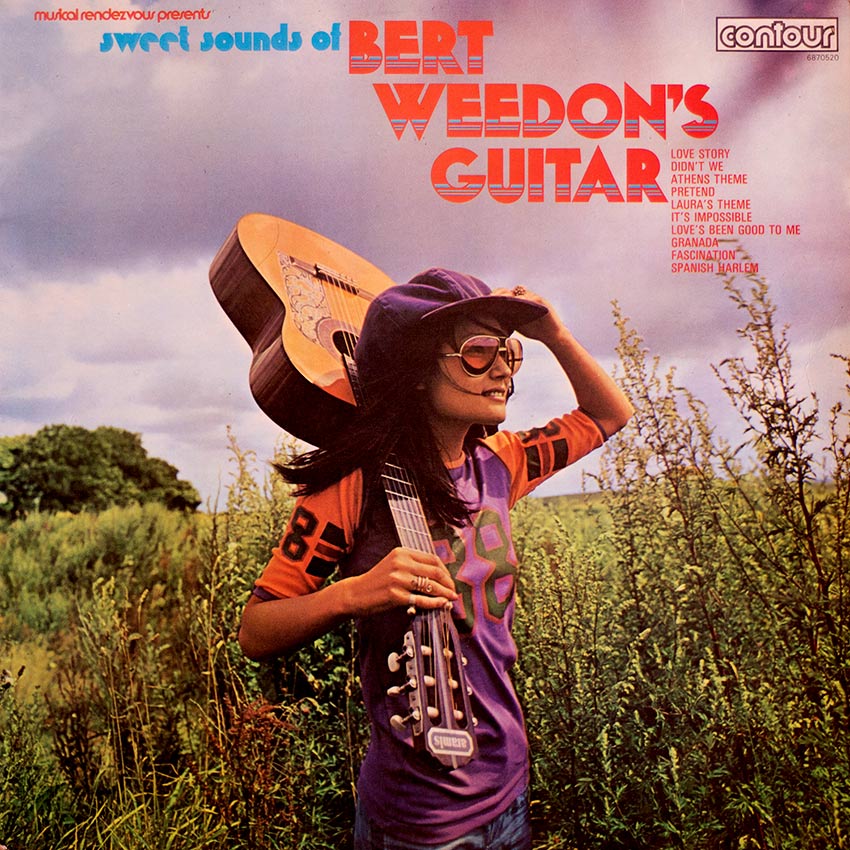 The Guitar is an instrument of many moods – exciting and pulsating in rock and roll, classically beautiful in the concert hall, dramatic in Flamenco music, and soft and sweet when played in a relaxed sentimental mood. A master of all these styles of guitar playing is the International guitarist Bert Weedon … a man who has spent his life playing his guitar in every field of entertainment, Bert is constantly in touch with the taste of the public in relation to the guitar and its music. His two previous L.P.’s “The Romantic Guitar of Bert Weedon” and “Rockin’ at the Roundhouse” have proved his ability to please his very large and varied public. Such has been the success of these two L.P.’s that we asked him to record this new L.P. in which he features the sweet sounds of his stylish guitar playing melodies that are not only great tunes, but lend themselves particularly to the magic touch of his guitar.

All the tunes have been carefully chosen and are among the most requested items that Bert is asked to play when on his theatrical and cabaret appearances in Britain and the Continent. The lovely “Lara’s Theme” from Dr. Zhivago, and the theme from “Love Story” are two great melodies from the world of the Cinema. “Fascination”, “Pretend” and “Spanish Harlem” are tunes that everyone seems to know and love. “Love’s been good to me” and “It’s impossible” simply had to be included because of the large number of requests we have received for Bert Weedon to record these numbers; whilst “Granada” and “Didn’t We” are two favourites to which Bert gives a special touch that we feel sure you will particularly enjoy. Finally “Athens Theme” was written by Bert when he appeared in that most romantic of Cities and was captivated by its charm and its music.

We feel that Bert Weedon has captured the magic of all these lovely tunes on this L.P. in the way that only he seems to be able to make the guitar sing so sweetly. The arrangements of the various pieces have been written by him to bring out the beauty of the tunes, and the listener can enjoy hearing them without being distracted by over orchestration … letting the tunes speak (or sing) for themselves!

Bert who has had great experience of playing to the public because of his radio and TV exposure, and appearances in theatrical productions and cabaret, has had many hit records in the charts and successful L.P.’s. We feel that in this his latest, you will enjoy some of the greatest tunes in popular music played in a way that will enchant you. So sit back, relax and listen to “The Sweet Sounds of Bert Weedon’s Guitar”.