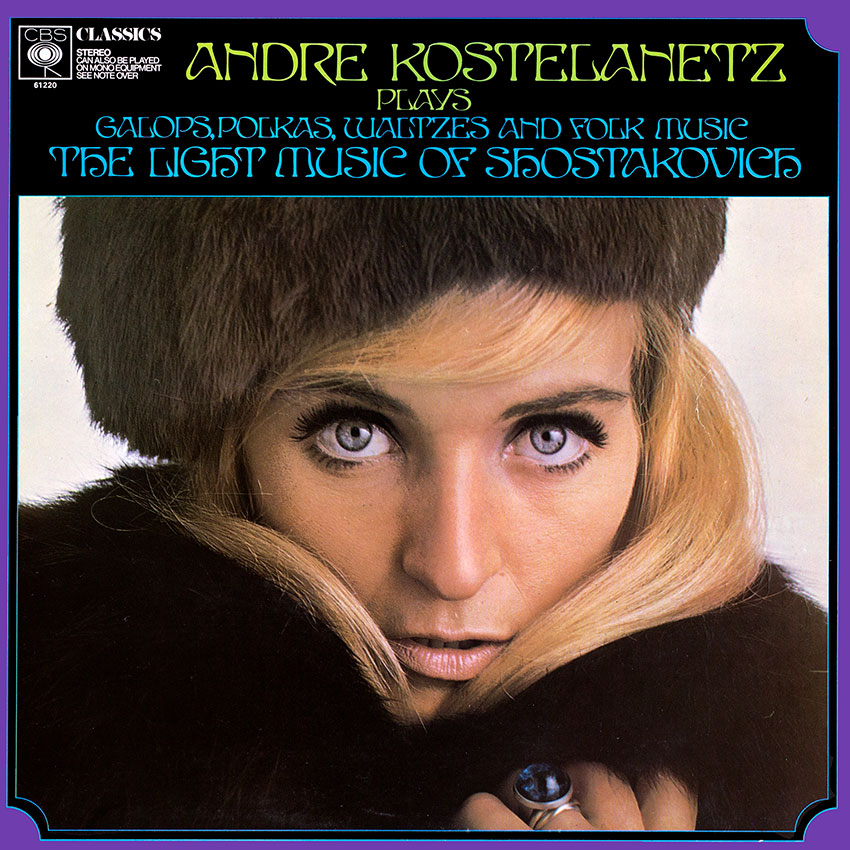 One of the special joys of music is meeting a classical composer with his long hair down. Quite apart from such geniuses of light music as the Strauss family, Offenbach and Chabrier, the most formidable musical masters, right down to the present day, have seldom been able to resist a rollicking tune or a humorous snatch of melody just for its own sake. Mozart had his Musical Joke; Haydn Wrote a Surprise Symphony; Richard Strauss Was a marvellous orchestra comedian, and the music of Charles Ives is dotted with Outrageous jokes. And, curiously, those , solemn Russians, in their ballets and occasional pieces, have provided us with some of our most delightful melodies and delirious dances.

In his search for appropriate works for his Promenade Concerts at New York’s Philharmonic Hall, André Kostelanetz has uncovered some delectable and hitherto neglected music. One of the most surprising sources for Kostelanetz has been the works of Dimitri Shostakovich. A stormy composer with a turbulent career, Shostakovich has always evidenced a strong satiric vein. But it is surprising to find among the works of this essentially dramatic composer a series of glittering galops, whirl-wind waltzes and perky polkas that are so breezy and delightful.

Mr. Kostelanetz begins this journey into the lighter world of Shostakovich with the colourful, folk-like Galop from the great musical comedy success Moscow, Cheremushki, and it is immediately apparent that Russian musicals are in no way like our own, being more or less a series of variety turns strung together on a slender thread of story. Nevertheless, the music blazes forth with irresistible—and typical—Russian vitality. Next comes a strongly rhythmic and playful Polka from the Ballet Suite No. 2, and then the Barrel-Organ Waltz, a lilting and wistful selection from the film The Gadfly. (If proof is needed of Shostakovich’s versatility, let it be noted that he also composed the score for the recent Soviet film version of Shakespeare’s Hamlet.) A brash and exhilarating Galop from the Ballet Suite No. 1 provides an interval of orchestral virtuosity. Then Harvey Schapiro appears as solo cellist in another piece from The Gadfly, a soulful and melancholy Nocturne that is at once expansive and intimate, archetypically Russian. Mr. Kostelanetz concludes the first half of his programme with three fragments from Moscow, Cheremushki; a satiric Dance, the joyously lighthearted Overture-Waltz and the swirling Waltz from Act III.

This exuberant concert continues with the Folk Festival from The Gadfly, a frisky blending of jaunty tunes, which is followed by another selection from the Ballet Suite No. 1, a Music Box Waltz that is as charming and humorous as its name implies. Then The Gadfly buzzes back with a dashing and gusty Galop.

A rather romantic Dance from the Ballet Suite No. 1 comes next, and consists of two cheerful pizzicato sections surrounding music that seems designed for pirouettes. In a final glimpse of The Gadfly we hear the Introduction, a lovely, brooding, incomparably Russian melody. Then Mr. Kostelanetz concludes his sunny Shostakovich survey with the Galop from Ballet Suite No. 2, a fiery rouser with those irresistible snare-drum effects that are so integral a part of exciting music.

Thus André Kostelanetz brings us to the end of his thesis that Shostakovich can be fun. Like every Kostelanetz programme, it is conducted and played with lively virtuosity and with an eye to orchestral fireworks. This time, his selections are mostly all skyrockets, and André Kostelanetz makes sure that each one lights up the sky.

Besides conducting his own superb orchestra, André Kostelanetz has conducted most of the major American orchestras—the New York and Los Angeles Philharmonics, the Philadelphia Orchestra, the Chicago, San Francisco, Houston, New Orleans and Minneapolis Symphonies. He has also made frequent tours abroad leading the Royal Philharmonic, the New Philharmonia, the London Symphony, the Paris Conservatoire Orchestra, the Berlin Philharmonic, the Israel Philharmonic, the Orchestre de la Suisse Romande, as well as the orchestras of Rome, Stockholm, Tokyo, and South America. He inaugurated the New York Philharmonic’s immensely successful Promenade Concerts at the new Lincoln Center, and has been associated with that orchestra for the past thirteen seasons as conductor of special non-subscription concerts.