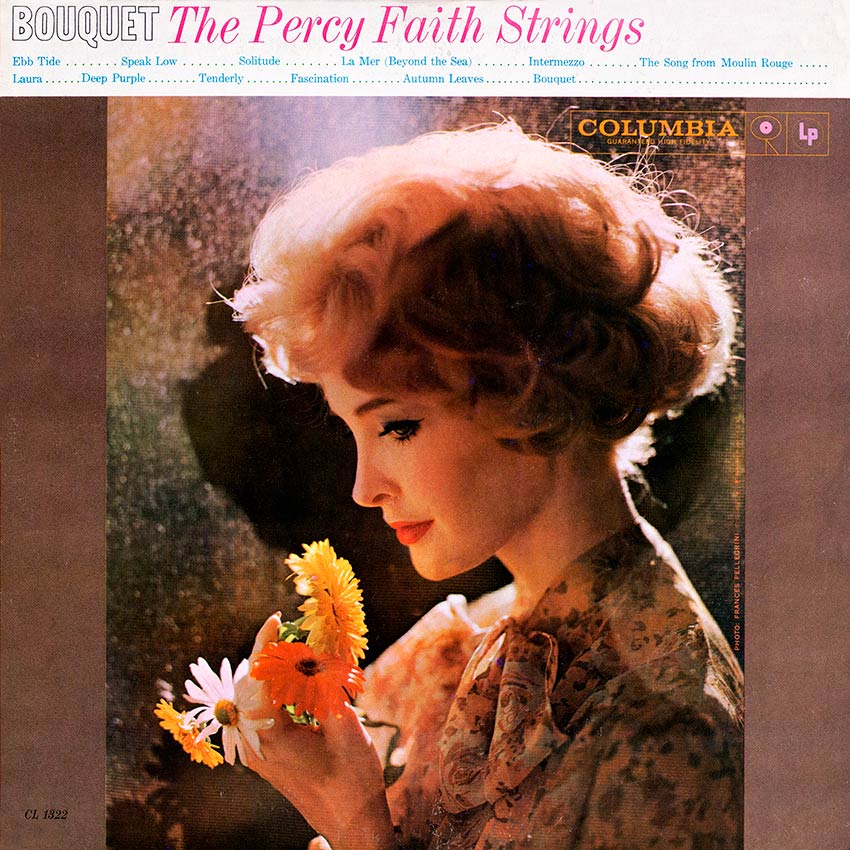 Percy Faith, whose regular orchestra of about forty-five musicians spends most of its time working for just about every conductor in New York except Faith, can, nevertheless, quite truthfully call this group of unexcelled professionals “my orchestra.” Like a company of actors who must scatter to earn a living, but who, when the call comes, return to the theatre, Percy’s orchestra reunites whenever he calls them for a new album, hungrily returning to the music they like to play best. They’ve been returning to Percy now for so many years that during and after each performance there is about the orchestra an air of affection and respect for each other and for “Perce,” all of which has as Much to do with the special beauty of Percy Faith’s music as his own com-posing and arranging talent. The glossy shine of his strings, the crackle of his brass, the mellow humor of his woodwinds, the swinging exuberance of his rhythm section you enjoy in albums such as My Fair Lady (CL 895), Viva (CL 1075) or The Columbia Album of George Gershwin (C2L 1) are a miraculous confluence of music and men who belong together.

This album began in a bar at the corner of Third Avenue and 30th Street after the last session for the Porgy and Bess (CL 1298) album. Percy, with Harold Chapman, the Columbia engineer who has developed the remarkable sound the Faith orchestra has on records, and a dozen members of the orchestra, who hoped to prolong this latest reunion an hour longer, were having a nightcap together before going home. With the excitement of Percy’s Gershwin arrangements still upon us, we discussed what to most of us was the essence of Percy’s orchestral writing, his “string sound.” And we decided that night that the next album would be orchestrated for strings alone to show off the remarkable interplay which takes place among the strings in all Faith arrangements.

“Not even a flute?” asked Percy’s flutist dejectedly. “Come on,” Percy told him. “I’ll drive you home. Next time maybe all flutes.”

Bouquet, then, is Percy’s first album by his large string orchestra, and he has written it with loving care. The title song is his own, but there is so much composition in a Faith arrangement that even the great songs by other composers included here seem to belong to Percy. This is a result of many things that go into one of his arrangements. First, there is a style that has come to be identified with Percy. You’ll recognize parts of it in the descending string figures in Tenderly and the rising sweep of The Song from Moulin Rouge. Then, there are the counter-melodies Percy writes to compliment the original melody of each song. They are always present, but listen particularly to Laura or Solitude or Fascination for fine examples. Also, the continuous movement of string sections is a Faith trademark, perfected in this album by dividing the orchestra into four major sections of two banks of violins, one section of low strings, and one section of piano, harp, guitar and vibraphone. The violin sections are, in turn, divided into two parts, and melodies seem to grow continuously across the orchestra. The contrast of ensemble and soloist is another Faith characteristic, and solos by George Ockner in Laura and Intermezzo provide another color. Finally, and, perhaps, most important-to an analysis of Percy Faith’s unique musical sound is the natural flow of his writing. Musicians like to play his arrangements because the writing is logical, the line always sustained. “They almost play themselves,” is a remark I’ve heard many times from people who have played his arrangements. You who listen know this feeling well. It is the reason you are listening again to Faith.

Little need be said about the songs. You know them all, except for Bouquet, which you will like to know. They are the greatest of all popular songs for this kind of album, and they fit together like parts of a suite for strings.

The orchestra for this album consists of thirty-two violins, eight cellos, six violas, two basses, and harp, piano, guitar and vibraphone. The forty-eight string players, led by Georgern Ockner, Percy’s concertmaster, are some of the finest performers in music, men whose skill has made them the highest paid, most respected instrumentalists in America. Even their instruments would cost a king’s treasure to buy, for in this orchestra are seven Stradivarius, eight Guarnerius, four Ruggieri and a dozen Gagliano instruments, as well as a sprinkling of such other famous makers’ names as Montagnana, Guadanini, Gaspar di Salo, Beronzi, and Goffriller. Percy conducted with a Scripto pencil costing twenty-nine cents.

During the years in which I have been associated with Percy Faith in the production of his records, I’ve seen and heard his talent displayed in almost every musical circumstance. He has conducted symphonies and variety shows, written for the screen, had his own television and radio shows, com-posed hit songs and flattered countless recording stars with his graceful accompaniments. He is a Canadian with a flair for Latin rhythms, a lover of Gershwin’s music, and a man who has earned his stature in the world by pre-serving and nourishing the finest of all performers, the orchestra. In other words, he is what he likes to be, and while I am certain that he will do much more of importance in music than he has already done, his is the success of an artist who enjoys that rarest of all achievements – universal acclaim for what he likes best to do.