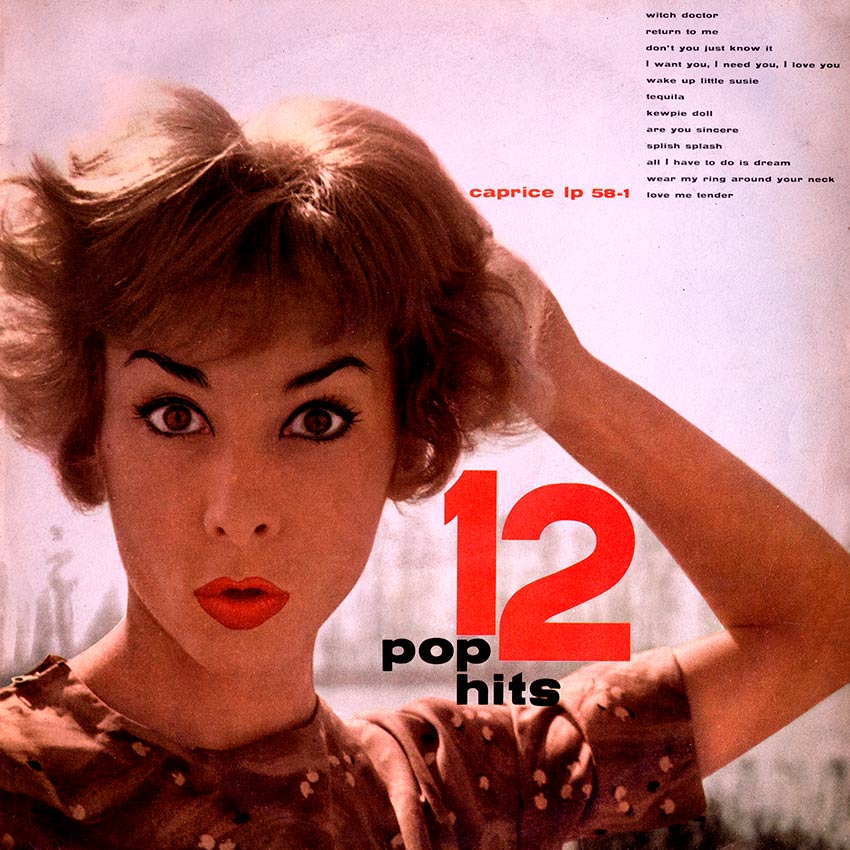 “Pop-Hit” is the name given to the most successful popular musics in the United States. A “Pop-Hit” is the song that is sung from coast to coast – from Alaska to Mexico, broadcasted by hundreds of radio and TV stations, played and sung by every band and vocalist throughout night-clubs, dance-halls and theatres. As recently as a few years ago only a small part of the American hits had any large popular success in Europe. Today the musical sensibility of Europe has changed, together with its tastes, its way of living, of thinking, of feeling. New needs are growing, not least among which there is the need to find a music that can excite and relax at the same time, a music that produces a real and direct emotion, a music that helps us to live, and is in itself an expression of our time.

You’ll find all this in the pop tunes of the most modern American style. You’ll find it particularly in the twelve tunes selected among the most successful pop hits in America today. They are issued on this records as performed by singers Jack Richard and Mark Stevens with the vocal group of the Corwins and Henk Oldman’s orchestra.
One pop hit is a big musical success: twelve pop hits are an LP record CAPRICE labelled.
WITCH DOCTOR: Put together one part of children songs, two parts of hill-billy and four parts of rock’n roll, mix them, add the voice of Mark Stevens and you will have a very pleasant music whose title is a “Witch Doctor”.
RETURN TO ME: The international popularity which many Italian songs are enjoying, has offered to the American authors a chance to create songs featuring an halo-American style. Particularly when authors are of Italian origin, as it’s the case for C. Lombardo and D. Minno, the halo-American style succeeds in offering very pleasant examples like this sentimental and romantic song, “Return To Me”, performed by Jack Richard.
DON’T YOU JUST KNOW IT: There is a long and rich musical tradition, as that one of negro folk music, behind an item like cc Don’t You Just Know It a. All the impressiveness and the emotional strength of the voices of Mark Stevens and The Corwins, in this tune, descend from negro spiritual and work songs, and from gospel singing; only the style has changed and is modern and brilliant and fit to our musical taste of today.
I WANT YOU, I NEED YOU, I LOVE YOU: A song like a I Want You, I Need You, I Love You has entered into the main American artists’ repertoire, as it’s a song created according to a modern style, to be fitted for the most pleasant interpretations, following the advices of the last vocal fashion.
WAKE UP LITTLE SUSIE is a very interesting example of the modern pop’ American style, based on voice inflexions, on accents and rhythm. Some voices, a guitar and an exceptional rhythm sense are sufficient to produce a pleasant and peppered performance, such as “Wake Up Little Susie”.
TEQUILA is one of the most popular hits of the last times, in the States and in Europe as well. a Tequila a, which name is taken from that of a well known Mexican drink, was born from the meeting of rock’n roll with mambo, adding the liveliness of latin-american rhythm to the incisive jazz-beat. The result is right explosive!
KEWPIE DOLL: Here we have a song just made-up for people who wish to dance, to be happy and to feel themselves as young fellows. It’s a thoughtlessness and optimist song, with a remarkable swing rhythm and an easy-to-the-ear refrain, sung by Jack Richard. A teenagers’ song which owns that spirit, freshness and modernity to be considered as leading characteristics of youth. Kewpie Doll is one of the best interpretations given by Jack Richard, who shows the most communicative swing.
ARE YOU SINCERE is one of the sweetest and most melodious today’s songs. Jack Richard’s interpretation has obtained best consents for the control of his style, which is modern but temperate. It’s considered his best performance of the year.
SPLISH SPLASH: A particularly strong rhythm, an exciting up-beat, a dynamic melodic line fostered by the intensity of riff appoint “Splish Splash” as a first rate rock’n roll, as well as the solo of tenor sax and the voices of Mark Stevens and The Corwins. Some latin-american rhythm patterns combine with the jazz elements and add color to the piece, that is one of the most popular hits of today.
ALL I HAVE TO DO IS DREAM: All you have to do is to close your eyes and dream when you listen to “All I Have To Do Is Dream” because this is one of the sweetest melodies, sung in one of the sweetest manners. A music for dancing in the dark, cheek to cheek; a music for dreaming.
WEAR MY RING AROUND YOUR NECK is an extremely popular song among American students and teenagers, surely for its dynamic and modern character. We are meeting with a love song, performed with a swing rhythm, with all vivacity and sprightliness of rock’n roll.
LOVE ME TENDER: Due to its peculiar characteristics, “Love Me Tender” owns the charm and the sweetness of the old traditional American ballads and its sentimental vein is particularly given prominence by the efficacious Jack Richard’s interpretation.