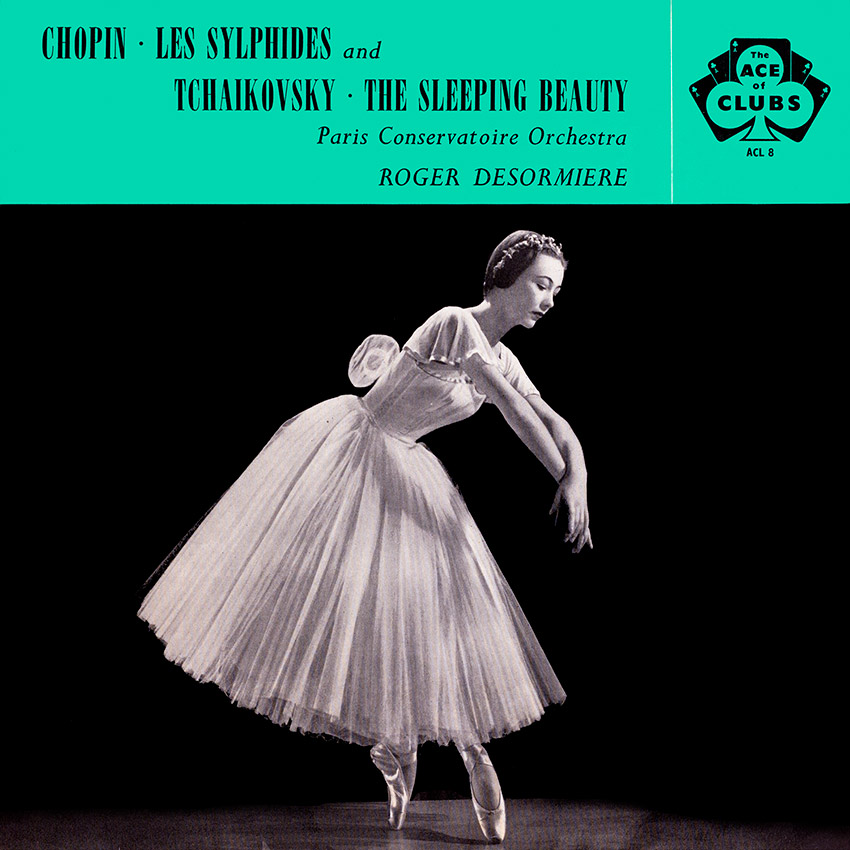 CHOPIN: LES SYLPHIDES In 1894 Glazunov published an orchestral suite entitled “Chopiniana,” consisting of orchestrations of four piano pieces by Chopin. At the start of the new century the choreographer Michael Fokine (1880-1942) decided to use this suite for a ballet.

He set to work and after an additional Valse had been selected and orchestrated by Glazunov the work was produced in St. Petersburg. Shortly afterwards “Chopiniana” was redesigned and danced to a new selection of music orchestrated by Maurice Keller: the only item retained from the previous production was the additional Chopin-Glazunov Valse. The Keller version was presented at St. Petersburg in April, 1908. A year later Diaghilev decided to include the work in the opening season of his “Ballets Russes” at the Theatre du Chatelet in Paris, and it had its first performance on June 2, 1909. At the suggestion of Alexandre Benois the title “Chopiniana” was dropped and that of “Les Sylphides” substituted : for this same production, the score was reorchestrated by Stravinsky. In Les Sylphides, a number of danseuses dressed in white and one danseur, also in white apart from black shoes and jerkin, join in a series of dance numbers against a background of moonlit glade and ruined monastery. The work provides a perfect unity of music, movement, scenery and costume.

TCHAIKOVSKY: THE SLEEPING BEAUTY Tchaikovsky’s The Sleeping Beauty, his second important ballet, was first performed on January 1/15, 1890, at the Maryinsky Theatre, with choreography by Marius Petipa. The story is based on the well-known tale of the Sleeping Beauty, as related in Charles Perrault’s Histoires ou Contes du Temps Passé. Modern revivals have differed in their treatment of the ballet as a whole; but it was originally presented in five scenes. The first (Prologue) represents the christening of the Princess Aurora; the festivities include dances by various fairies, of whom the most important is the Lilac Fairy—she is, as it were, the guardian angel of the story. The wicked fairy Carabosse, who has not been invited to the christening because everyone thought she was dead, suddenly interrupts the festivities and places a terrible curse on the Princess. In the second scene (Act 1), which takes place sixteen years later, the Princess is at her spinning-wheel; the spindle pricks her finger, and she falls into a deep sleep from which she cannot be awakened. The third scene (Act 2, Scene 1) is a hundred years later; Prince Charming is out hunting with his friends. The Lilac Fairy appears to him and shows him the Sleeping Beauty in a vision; she promises to guide him to her. The fourth scene (Act 2, Scene 2) shows the Princess’s awakening by the Prince, and in the fifth (Act 3) we see their wedding celebrations. The well-known Suite consists of music from various parts of the ballet, and is in five movements.

ROGER DESORMIERE Roger Desormiere is one of the most outstanding French conductors of our time. Born at Vichy in 1898, he studied music at the Paris Conservatoire, and in 1922 won the Prix Blumenthal for composition. Two years later he took part in the soirees held by Count Etienne de Beaumont in Paris and later directed the performances of the Swedish ballet. From 1925 to 1930 he was musical director of the Diaghilev ballet, and conducted performances of this company all over Europe. When the company broke up after the death of Diaghilev, Desormiere toured Europe as a guest conductor, appearing in Paris, London, Brussels, Munich,Budapest, Leningrad and Moscow. He has taken part in most of the I.S.C.M. annual festivals, and in 1949 was invited to the Edinburgh Festival with the Paris Radio Orchestra. In 1944 Desormiere was appointed director of the Paris Opera-Comique, where he conducted many important revivals. In 1946 he ceased to hold any official appointment, but continued to make guest appearances in the main musical centres of Europe.