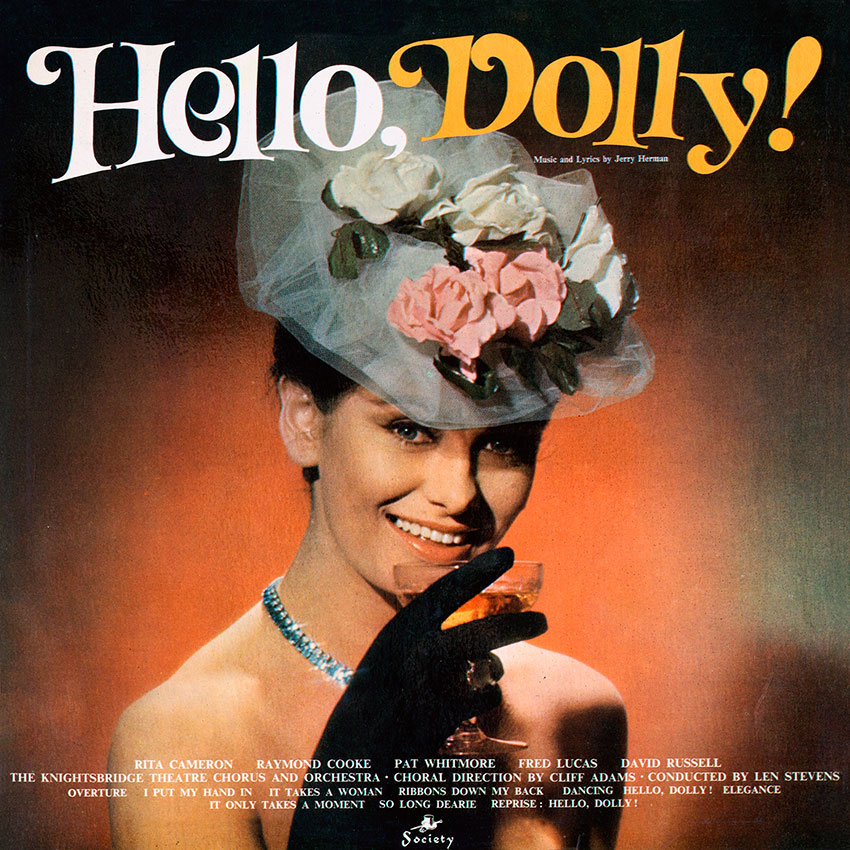 THE last great American Musical, ‘My Fair Lady’ has at last found its successor – it’s ‘Hello, Dolly!’, a warm, colourful, rousing show which has been packing in the public on Broadway for two years and will most surely do the same in this country when it opens here, fortified by a production which is rumoured to be costing somewhere in the region of £100,000. As with ‘My Fair Lady’, which was adapted (somewhat loosely, it’s true!) from ‘Pygmalion’ by George Bernard Shaw, so ‘Hello, Dolly!’ can also be said to have originated in this country. In 1835 a play entitled ‘A Day Well Spent’ was produced in London. This was written by a fellow called John Oxenford and he soon had the pleasure of seeing his plot lifted and turned into a Viennese comedy. Einen Jux will es sich Machen’. This, in turn, was admired by Thornton Wilder who based his play ‘The Merchant of Yonkers’ upon it. The title of the play was changed to ‘The Matchmaker’ and it is upon that play that ‘Hello, Dolly!’ is based. John Oxenford won’t, presumably, get any royalties.

Hello, Dolly!’ is set in New ‘York City in the year 1898. It is summer and our heroine, Dolly Levi, widow of one Ephraim Levi, a dry-goods merchant, is on her way to arrange a second marriage for the well-known half-millionaire Mr. Horace Vandergelder. That’s what she is supposed to be doing, but in fact, she intends to marry the man herself—and we discover the true character of Dolly Levi as she sings ‘I Put My Hand In’.

We next meet the fabulous Mr. Vandergelder himself, who is afflicted with two clerks, (who in turn are afflicted with Mr. Vandergelder) and his weeping niece, Ermengarde. Mr. Vandergelder, who is pretty certain that he is a genius in a world largely composed of fools, explains why he has decided to marry again in ‘It Takes A Woman’. Dolly arrives and decides to clear the field of all possible rivals (including a Mrs. Irene Molloy—a young widow she had herself presented to Mr. Vandergelder) by announcing the imminent arrival in New York of Ernestina Money, an heiress (and with a name like that, what else?) whom she will present to the lucky Vandergelder that very afternoon. Vandergelder jumps at the chance then goes off on a business errand into the City. His two clerks, Cornelius Hackl and Barnaby Tucker decide that it’s time they began to live a little, so Cornelius tells Barnaby about the wonders of the big city and they and Dolly try to persuade Ermengarde that it’s time for her to rebel, too.

Now we make the acquaintance of Mrs. Molloy, the attractive young widow who is in the running in the Vandergelder marriage stakes. She is a milliner who is finding fife a bit old hat and who wants some excitement—as she tells us in ‘Ribbons Down My Back’. Cornelius and Barnaby have been spotted by Vandergelder as they are attempting to live it up in the big city, and they’re forced to take refuge in Mrs. Molloy’s shop. Vandergelder enters in search of them, and, despite the efforts of Mrs. Molloy, Dolly and Minnie Fay—Mrs. Molloy’s assistant—he discovers that there are men in the shop and, although he doesn’t discover who they are, he is angry enough to break off relations with the milliner and inform Dolly that he will definitely meet her ‘heiress’ that same .evening. Mrs. Molloy is furious but Dolly manages to patch things up by suggesting that the two clerks, who reappear when Vandergelder goes, should escort Mrs. Molloy and Minnie Fay to dinner at the Harmonia Gardens Restaurant. Cornelius has three dollars in his pocket so protests that he couldn’t possibly go to the Harmonia Gardens because they have dancing there—and he can’t dance. So Dolly teaches first Cornelius, then Barnaby and finally everyone in the street as she sings ‘Dancing’.

Act Two begins with the impecunious Cornelius assisted by Barnaby explaining that the best way of reaching the Harmonia Gardens is by walking—that’s ‘Elegance’. And at the Restaurant all the talk is of Dolly Levi who is rumoured to be paying the restaurant a visit for the first time since the death of her husband. And, sure enough, when the excitement has reached fever-pitch the curtains at the main entrance part and Dolly, in a stunning red dress, comes sweeping regally down the stairs to the melody which is the hit of the show—’Hello, Dolly!’ Vandergelder is at the Harmonia Gardens, of course, and Dolly sets about getting him to propose to her by the typically feminine ruse of assuming that he does want to marry her and firmly refusing the offer that the poor man hasn’t quite got around to making. Having put our Mr. Vandergelder completely off balance, she then paints a morbid, dreary picture of what life will be like without her, and then points out that his well-ordered existence is not quite so immaculate as he thinks. This last remark is occasioned by Vandergelder’s discovery of his two clerks, and, horror of horrors, his delicate young niece actually in the show at the restaurant. He discharges Cornelius promptly, but that worthy doesn’t Care—he’s in love with young Mrs. Molloy, and he doesn’t mind telling them all that when a man like him falls in love ‘It Only Takes A Moment.’

Vandergelder we next discover in prison—creating a dis-turbance at the Harmonia Gardens Restaurant is the charge—and Dolly, who visits him, cheers him up immensely with her song of hope and encouragement—’So Long, Dewier But he is released eventually and back in his office without clerks, without niece and without Dolly, he realises that he, like everyone else at times, can be a bit of a fool. And he realises he’d be an even bigger fool if he didn’t get Dolly Levi to marry him. Whereupon Dolly enters, having miraculously expected this situation, he asks her to marry him, she accepts, and the curtain falls to the strains, once again, of ‘Hello, Dolly!’

This show, which has already won the New York Critic’s Circle award for a musical is indeed a ‘worthy successor to ‘My Fair Lady’. Society Records have assembled a cast and orchestra who do full justice to the colourful score and witty lyrics and if, by some chance, you can’t get a ticket for the show until April, 1969 (there were 10,000 applications for first night tickets alone!) then you will find this disc invaluable: for pretty soon everybody’s going to be humming the tunes from that most high-spirited musical to come out of the States (via John Oxenford, of course) since that country decided to show the world how a musical should be made. It looks as if it’s going to be a very big ‘Hello, Dolly!’
© ART & SOUND LTD., LONDON, 1965