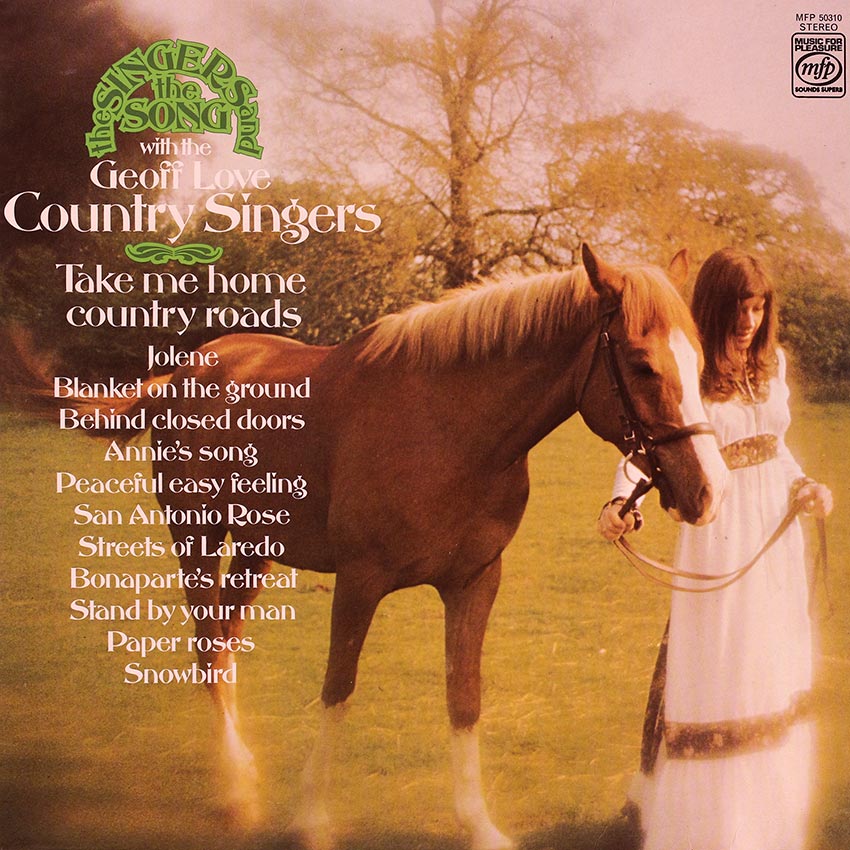 Though every once in a while a country record would burst into the pop charts, maybe even sell a million copies and earn a gold disc award, the music was, until just a few years ago, essentially an esoteric interest, lacking any real impact with the general record-buying public. All that has changed now though and country music has not only become one of the biggest selling of all popular music forms its appeal has become international, as is evidenced by the enormous success of such events as the annual Country Music Festival held at Wembley.

What was once an essentially American art-form and one appealing almost exclusively to the white working class American at that, has now won itself a wide-ranging audience and influenced the general development of other popular music forms, as can be heard in the . country-rock sounds of groups like Dr. Hook, the Byrds and others and in the use of country songs by so many of today’s major soul singers.

This collection of songs, interpreted so admirably by the multi-faceted talents of Geoff Love and his singers, sums up the spirit of America yet they have all proved enormously popular in other countries too.

Indeed, Take Me Home Country Roads, despite its Southern States’ atmosphere was first a hit for British singer Olivia Newton John who has now established herself as country music’s leading lady, further proof of just how cosmopolitan the music has now become.

The real strength of the country sound comes of course from the marriage of hauntingly catchy melodies with lyrics which really do tell a story, whether it be the down-to-earth romance of Behind Closed Doors, a massive hit for Charlie Rich, the plea of one woman to another in Dolly Parton’s Jolene or the violence of Streets Of Laredo, best known from Marty Robbins’ superb interpretation first heard in the epic Gunfighter Ballads album which reminds us that once the music was known as “Country and Western” and contained strong links with the old Wild West.

Every one of these 12 songs stands in its own right as a country classic and the treatments of them which you hear show another great strength of this vibrant music, the adaptability of its material to so many different readings.

Unlike pop music where, nearly always, the original hit version is the only one people regard as valid, country songs become common property of all country artists, such is their strength, and it is nothing for a tune to become a hit several times over for different artists.

Country music relates to real life, to real rather than fairy-tale situations, but above all else it touches the emotions and entertains and we feel sure that’s just the way you will be affected by this album.