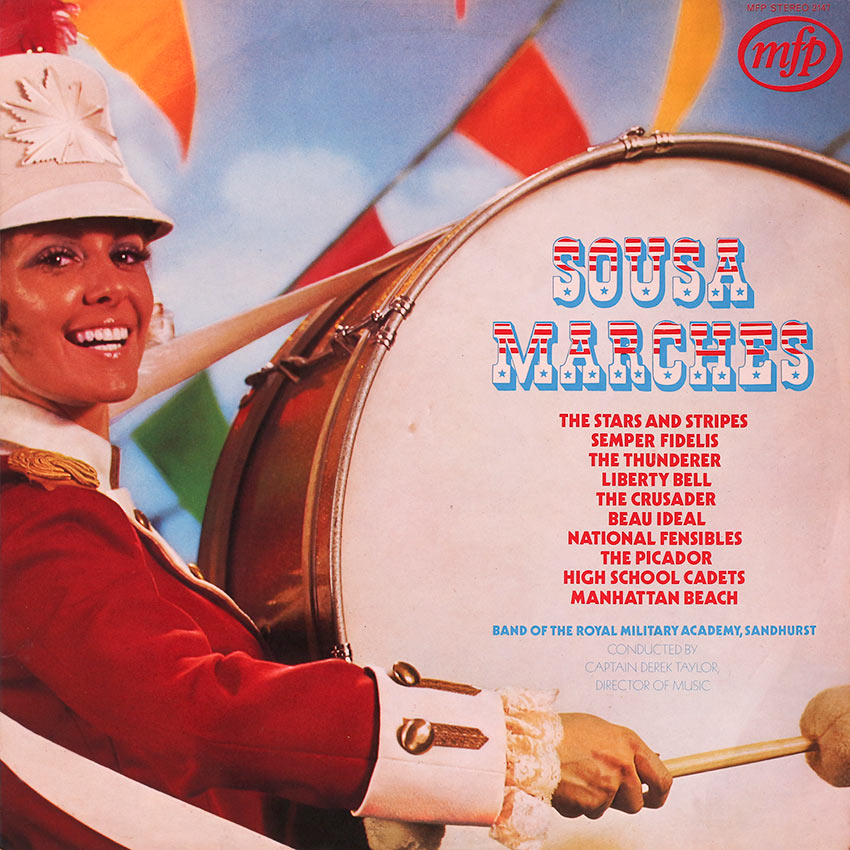 “Military justice is to justice what military music is to music“, so said Groucho Marx. It does indeed require a stoic constitution to withstand the brutal monotony of military march music but clearly there are those who have it or records like these would never have been made. Although I’m guessing this one sold a few more because it chose not to feature a burly mustachioed drummer on the cover.

John Philip Sousa was born on November 6th, 1854, the son of Antonio So. By adding the letters USA to his father’s name he arrived at his own patriotic identity.

His father was a Spanish trombonist in the US Marines Bond, which Sousa joined in 1868 at the age of 14. Under Sousa’s influence the military band completely changed its character. By reducing the number of brass instruments and increasing the woodwind he created on ensemble which was capable of subtleties and nuances previously unknown outside the concert hall. He achieved his greatest fame as the composer of such rousing and satisfying marches as ‘The Stars and Stripes Forever’, High School Cadets’ ‘Liberty Bell’, Semper Fidelis’, etc., ten of which are included on this resplendent disc.

Sousa was one of the first truly American composers, and he toured Europe with his own concert band in 1900, 1901, 1903 and 1905. In 1910 he took it on a World tour and his audiences everywhere were soon familiar with the tremendous virtuosity of his hood-picked players, and the astonishing sight of the bond’s trombones lined up for the climax of ‘The Stars and Stripes Forever’.

The earliest known date of the band of the Royal Military Academy, Sandhurst, was 1813, when its size was a mere fourteen members. The first known bandmaster was Thomas Sullivan whose son was Arthur Sullivan who wrote the music for the famous D’Oyly Carte operas.

The present band is a highly professional unit which provides all the music for the Academy and incorporates marching band, concert band, string orchestra and various dance combinations.

This performance of Sousa Marches not only demonstrates the very high musical standards of the present band, but also reflects the flair and precision of marching and foot-drill associated with the Royal Military Academy, Sandhurst.

Captain Derek Taylor was appointed Director of Music in April 1969, having been school bandmaster at Kneller Hall, and having had a distinguished music career with the 16th/5th The Queens Royal Lancers. Under his inspired direction the R.M.A. band has achieved a peak to which it has aspired since its creation more than 150 years ago.