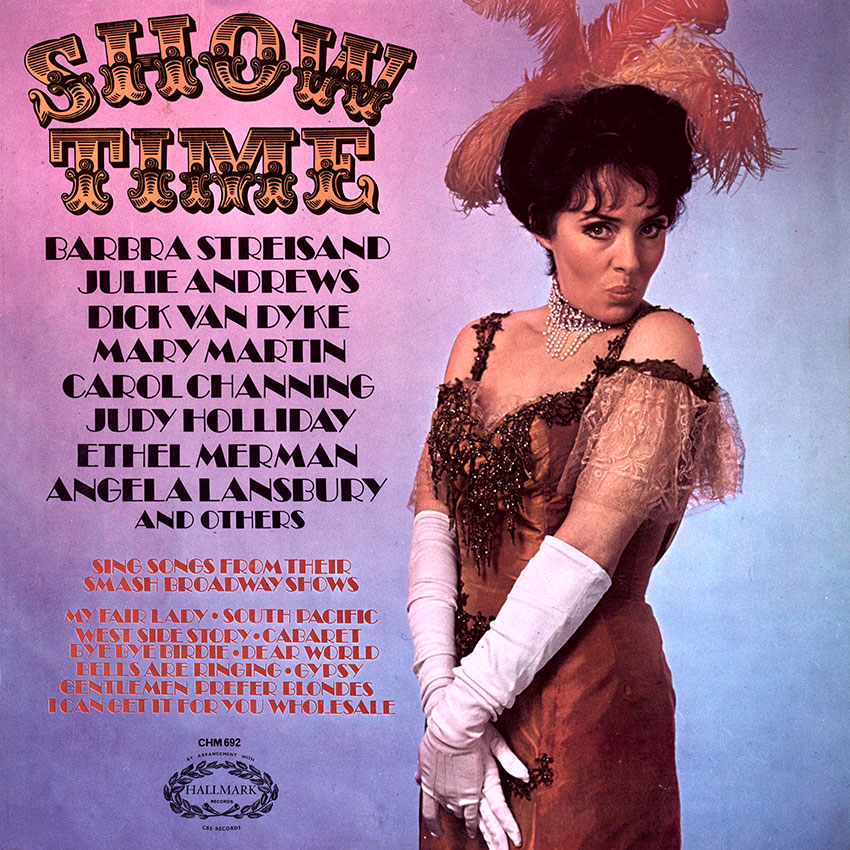 This album covers the coming of age of – as Variety coined it – the “legituner,” as well as many of the stars who have made musical comedy history in the last two decades or so, presented here in performances which helped gain them their initial renown.

Following years of playing non-musical “other woman” roles in films, Angela Lansbury had already been the toast of New York as Jerry Herman’s singing, high-kicking Mame when she opened in Dear World. With a score by Jerry Herman, Dear World proved no world-beater, but it had a charming, under-rated score that merits survival. The title song-sung by Angela, addled Parisian dowager-infectiously conveys the entertainment’s zany quality and suggests it could all one day be revived as Hello, Countess!

Night club comedian Dick Van Dyke, who co-starred with Miss Julie Andrews in the picture which won her the movie capital’s Academy Award, (Disney’s Mary Poppins), had his first important inning on Broadway, too, as the hapless agent in Bye, Bye Birdie (which he recreated on the screen). “Put On A Happy Face,” written by Charles Strouse and Lee Adams, seems the ideal number to represent Dick’s first big starring splash in a show.

South Pacific is in a class by itself, a “show of rare enchantment, novel in texture and treatment, rich in dramatic sub-stance and eloquent in song,” wrote Brooks Atkinson. Some have called the Richard Rodgers-Oscar Hammerstein II production “the perfect musical comedy,” and there’ll be no arguments from this seat on the aisle, established opera’s Ezio Pinta as a matinee idol and put Mary Martin, after many so-so movie roles, right alongside Ethel Merman as a queen of musical comedy. Miss Martin’s “I’m Gonna Wash That Man Right Outa My Hair” is a classic-women everywhere quickly adopted Nurse Nellie Forbush’s short hairdo that Mary maintained during the run because she literally washed that Ezio out of her hair on stage eight times a week.

West Side Story, with its ambitious, integrated score by Leonard Bernstein and Stephen Sondheim and dances by Jerome Robbins, remains a pace-setting work of the musical theater (as well as of Hollywood filmmaking-it won the 1961 Best Picture Oscar). When Larry Kert and Carol Lawrence, as an updated Romeo and Juliet, first duetted in anticipation of a special “Tonight” (the selection in this album), they were prophetic: from that night on this medium would be enriched.

England’s Julie Andrews was no $1,000,000 – a – movie star when she landed the coveted role of Cockney flower girl Eliza Doolittle in the Alan Jay Lerner-Frederick Loewe My Fair Lady. She had appeared on Broadway before in the Sandy Wilson spoof of 1920s musicals, The Boy Friend, but it was My Fair Lady which the New York Times and a record number of patrons called “one of the best musicals of the century,” that made her a star. Appropriately, Julie’s wistful rendition of “Wouldn’t It Be Loverly” from that work is included in this album.

The generally conceded peak of Ethel Merman’s career came with Gypsy. singing songs by Jule Styne and Stephen Sondheim. As the ambitious Madame Rose, mother of Gypsy Rose Lee and June Havoc, she brought a dynamism to the stage with such numbers as “Everything’s Coming Up Roses.” This role is Miss Merman’s own favorite among her many; and when Gypsy opened, Walter Kerr’s opinion was widely quoted: “The best damn musical I’ve seen in years!” No collection of musical moments from Broadway would be complete without this electrifying performance.

Long before Carol Channing wrapped her tonsils around the song (and show) Hello, Dolly!, she had captivated New York audiences with her portrayal of foxy-dumb flapper Lorelei Lee in Gentlemen Prefer Blondes, aided by a Jule Styne-Leo Robin score. She had appeared to advantage previously in the revue Lend An Ear, but her first great popular hit was delivering “Diamonds Are A Girl’s Best Friend” in Blondes. Herewith, an encore.

Joel Grey was already a versatile young veteran of the show his wars when he clicked for the first time on Broadway as the decadent, painted Master of Ceremonies in Cabaret. Performing John Kander and Fred Ebb tunes, Grey, said the New York Times. “burst from the darkness like a tracer bullet.” The ebullient title song is his on this collection.

In Harold Rome’s I Can Get It For You Wholesale new-comer Barbra Streisand got most of the attention as a singing funny girl called “Miss Marmelstein.” Before long, she was Funny Girl and the 1960s “Star of the Decade.” Miss Streisand here reprises her first success as the secretary Walter Kerr said had “folding ankles . Barbra’s great.” Mr. Kerr’s impetuous superlative has been vindicated by time, but Barbra’s ankles have proved this lady’s only features to escape further comment.

“The Party’s Over” is a fitting finale for this album. It was done by the late comedienne Judy Holliday in her first musical, Bells Are Ringing, which reunited her and lyricists Betty Comden and Adolph Green, with whom she had worked years before as members of the satirical act called the Revuers. Jule Styne wrote the music for Bells, in which Judy was an operator at an answering service with the name “Susanswerphone.” Showtime should keep the party going indefinitely.