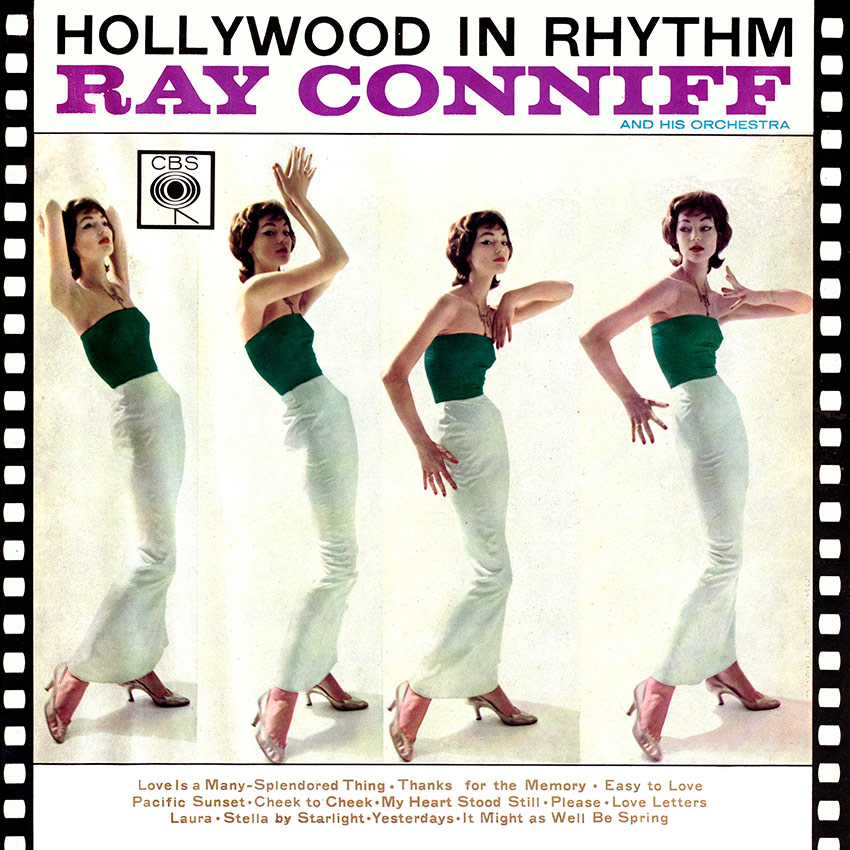 The inimitable music of Ray Conniff turns up once more in still another enlivening and royally entertaining dance programme, this time turning the spotlight on Hollywood. Mr. Conniff and his talented associates have already saluted Broadway and melodies from the classics, in addition to their three other best-sellers, and this time around finds them no less fresh and imaginative.

In the strictest sense, two of the songs did not originate in Hollywood, but they have shown up in motion pictures, and are splendid examples of superior song-writing to boot. The Conniff arrangements, neatly tailored to the requirements of dancers, give each of the numbers a cheerful new touch, and along the may he adds a few new ideas of his own, too.

The new Conniff collection opens with Love is a many splendoured thing, a 1955 creation from the movie of the same name. Paul Francis Webster and Sammy Fain were the composers, and the Conniff treatment is properly in the ballad vein, with the customary strong beat. Next comes the Leo Robin-Ralph Rainger tune forever associated with Bob Hope, Thanks for the memory, from “The Big Broadcast of 1938” (the song was actually published in 1937), again in a catchy, easy beat. Cole Porter is the composer of Easy to love, from 1936’s “Born to Dance”, and in this arrangement, as usual, the Conniff voices add an extra dimension of sound and excitement to a favourite tune. The conductor-arranger shows up as composer as well in the next selection, Pacific sunset, which he wrote in 1958. The selection has, along with its charming melody, the kind of infectious rhythm that is no much a part of the Conniff style. Cheek to cheek from “Top Hat” of 1935 brings Irving Berlin’s touch to the programme, and Ray serves up the classic melody with a light, engaging treatment. The Rodgers-Hart My heart stood still, which winds up this side with a breezy shuffle beat, originated on Broadway in 1927, in “A Connecticut Yankee”, but has done screen service as well, and adds yet another cheerful note to the collection.

In 1932, Leo Robin and Ralph Rainger wrote Please for Bing Crosby to sing in the first edition of “The Big Broadcast”, and it has remained one of the most popular tunes of our time. Ray Conniff then presents a brace of title tunes, from “Love Letters” and “Laura” both of 1945. The former was written by Edward Heyman and the late Victor Young, the latter by Johnny Mercer and David Raksin. Love letters is heard in a smooth, romantic setting, while the familiar Conniff beat comes to the fore in Laura. “The Uninvited”, an eerie ghost story of 1945, also included the lovely Stella by starlight theme, written by Ned Washington and Victor Young, and heard here in a setting that mirrors its concerto-like quality. Yesterdays, by Otto Harbach and Jerome Kern, appeared first on the stage in “Roberta” in 1933, but showed up in both movie versions of the production, the most recent being called “Lovely to Look At” after another Kern melody. Ray Conniff gives the melody a lightly swinging arrangement that is nevertheless coloured with the melancholy moodiness of the basic idea of the song, and then concludes his programme with It might as well be spring, the Academy Award-winning song by Richard Rodgers and Oscar Hammerstein II from their 1945 success, “State Fair”. Here, as throughout this eminently enjoyable collection, Ray Conniff and the orchestra present another delightful sample of the kind of music-making that has made them among the most popular dance organizations of the present day, music that is light, airy and as delightful to listen to as it is for dancing.