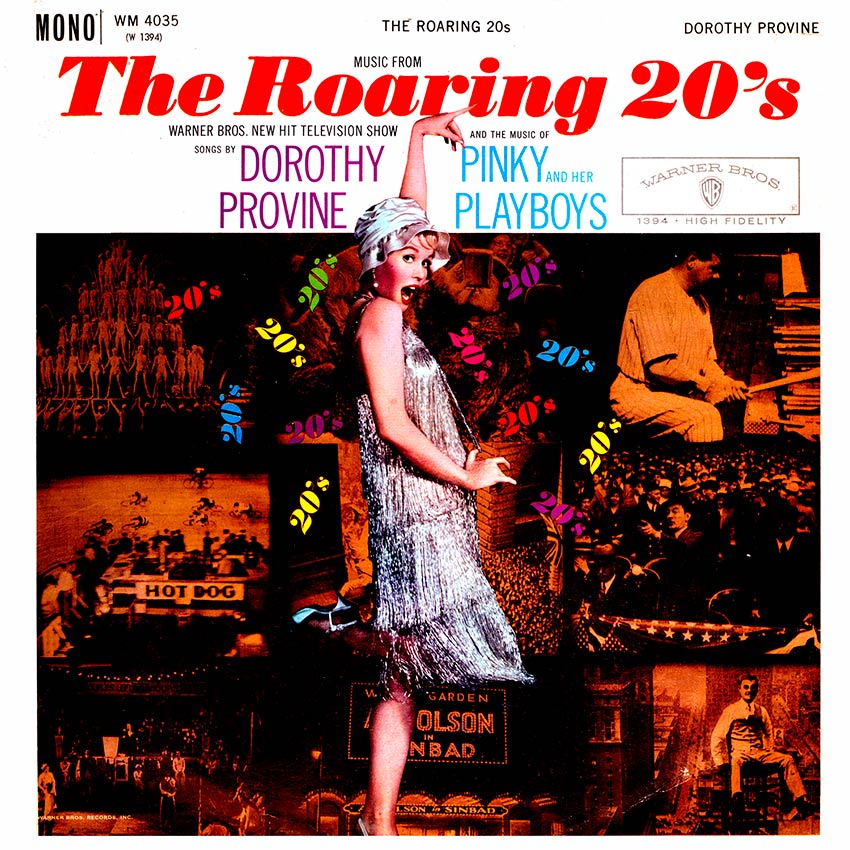 From out of the Sixties’ fascination with The Twenties comes Warner Bros.’ TV musical-drama, “The Roaring 20’s.” Starring Dorothy Provine, Rex Reason, Donald May, and Gary Vinson, the show mixes equal parts of hurley-burley and melody. In this album, the accent is on melody, with just a dash of hurley.

The major part of the melody-making in “The Roaring 20’s” is performed by Miss Provine. Her voice slithers down through the decades with such clarity on these numbers that the listener is left with the appetizing sensation that any moment now she’ll come busting through the beaded drape, drop an eyelid with the subtlety of a fire curtain, and let fly with a voice that fairly booms off the baldies out front. Not that Pinky (the character Dorothy portrays) lives alone in this vivid world.

On this album you’ll be hearing Pinky’s Playboys (the cabaret band that accompanies Dorothy on the show, together with the six squeaky-voiced chorus girls who go under the name of “And the Girls,” a trio of young chorines. reminiscent of the limp-harmony groups of the era, a recreated “syncopation dance orchestra,” a New York Dixieland group, and various combinations thereof. Put them all together, they spell the music of the Twenties with all the Roar still in them. If you want to think of this album as a documentary, you won’t be far wrong ; the music is as authentic as it can be. Much of it is played directly from “stocks,” the mass-produced musical arrangements of the time. These have been used because of Warner Bros.’ desire to produce a documented collection of the styles and moods of the era’s popular music. To this end, thirty (instead of the customary dozen) tunes have been included. Each of them, as you can note from the long list above, shares equally in the flavor of The Twenties. They are surrounded with all the sentiment and sass of the Prohibition Era. And as one listens through this cavalcade of the musical Twenties, it is almost impossible to turn one’s mind’s eye away from the greatest visions of that period : Lindy coming home, Al Smith, Jimmy Walker, Jolson on one knee, and the Bambino swatting one out there ; the aerial dare devils, raccoon-coated collegians, flashing hip flasks, and six-day bicycle races. And, of course, the music of Pinky and her Playboy, The latter item is included in this listing because it fits in so neatly. The air of utter authenticity that surrounds each TV episode of “The Roaring 20’s,” from the city room of The New York Record to the shuttered clubs along Broadway, all the areas and artifacts of Manhattan in The Twenties are there.

Much of the credit for this extraordinary realism can be given to the large storehouse of early Warner Bros. newsreel and feature film that captures this era simply because it is of this era. Through such specialized film-making processes as rear projection and intercutting, it is actually possible to create the illusion of the show’s 1960 actors taking part in a chase sequence through an authentic, contemporary ticker tape parade of the era that is the real stuff. It is this same devotion to authenticity that creates this album. With all its breadth of repertoire and performers, it presents a true panorama of America’s wackiest age — The Roaring 20’s.