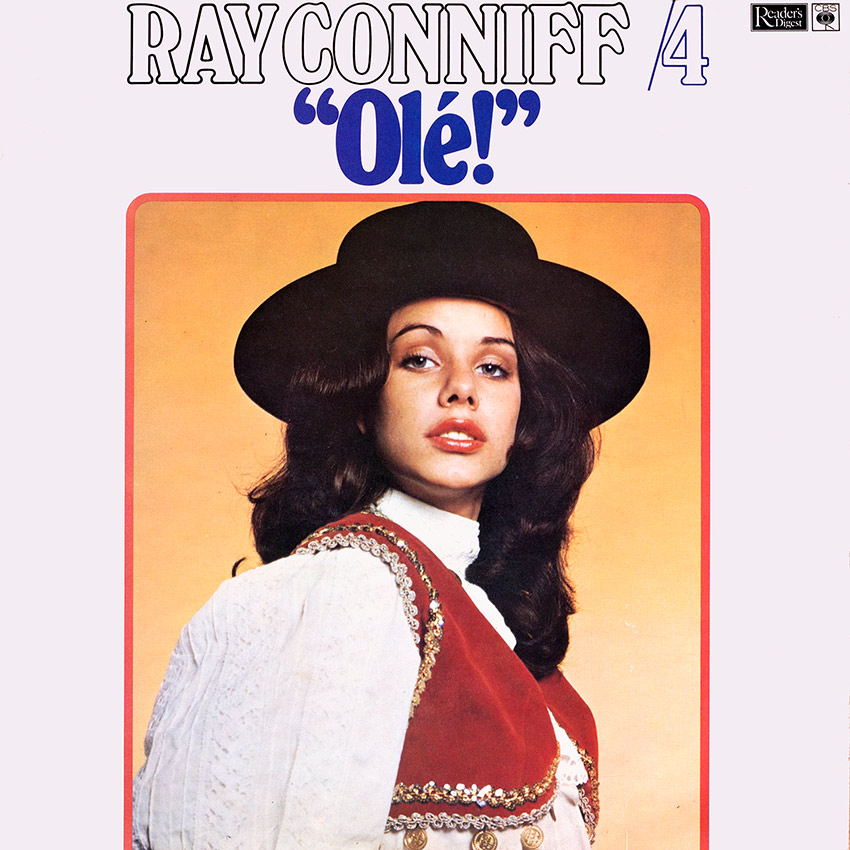 Perhaps the paramount feature of Conniff’s sound is its adaptability to various musical styles, and this feature is sharply emphasized in the enclosed collection of twelve songs, all of which bear a distinct Latin-American or Spanish flavour. Latin rhythms, of course, are always exciting to work with, although too many arrangers make the mistake of over-stressing the rhythms to the virtual exclusion of other equally important elements. It is a common stylistic pitfall which Ray Conniff expertly avoids in this collection.

In Ray’s case, the presentation has to be different in view of the fact that his distinctive sound is concentrated on the combination of voices and front-line instruments. Of course, the rhythm is important in establishing the right mood —as it is in any Conniff arrangement—but it remains subservient to the broad splashes of vocal and orchestral colour, to the swelling harmonies and—above all—to the melody itself. And the melodies which Ray has selected in this case are exceptionally strong ones. For some of the scores you will notice that Ray has altered the original metres by taking certain songs at a faster tempo than is usual for them. In the Latin-American style, as in everything else he attempts, the Conniff philosophy pays off once again. Naturally, the real proof of this musical pudding is in the hearing—but when you have heard it, you’ll see just why Senor Conniff is such a revered and versatile musical chef. OLÉ!

Side One
Granada This famous and durable composition makes a fitting start to this collection of Latin favourites au Conniff. The majestic sweep of this well-known melody has proved to be an irresistible proposition for bravura tenors like Mario Lanza and Harry Secombe. Robust rhythmic stylings of the song, by Frankie Laine and Frank Sinatra respectively, took it into the pop charts on two occasions, and over the years various orchestral arrangers have used the tune to show off their writing skills. This superb Ray Conniff score is full of colourful effects that seem to add extra beauty to the wonderful, soaring melody.
Lady of Spain
Although this popular song exudes an authentic Spanish flavour, it was in fact composed by an Englishman, Tolchard Evans, born in Harringay in 1901. He sold his first song when he was in his late teens, and in the ensuing forty-odd years composed about a thousand more. Finding terrific international success with his 1931 composition Lady of Spain, Evans followed through with other songs of a similar nature, such as Valencia and Barcelona. Other Evans hits included Let’s All Sing Like the Birdies Sing, Unless and Song of the Trees. Lady of Spain, however, remains his greatest hit and it is doubtful that she has ever appeared in a more attractive musical costume than the one Ray Conniff has dressed her in for this occasion.
Malaguena
No collection of Latin-American music would be complete without at least one melody from the pen of the great Ernesto Lecuona, and this inspiring composition is one of his finest. A Cuban by birth, most of Lecuona’s popular melodies (he has also written much “serious” music) contain a pronounced local character, strongly founded on the traditional dance music of his country. Such works include Siboney, Andalucia, Danza Lucumi and Always in My Heart. Ray Conniff’s arrangement of Malaguena reveals how effectively Lecuona’s music can be adapted to fit into a modern orchestral pop setting.
Do You Know the Way to San Jose?
It is not purely by coincidence that some of the best popular songs of the past fifteen years have been composed by Burt Bacharach. Right from his first big hit, Magic Moments, popularized in 1957 by Perry Como, Bacharach has continued to develop in so many different directions. One can easily cite those classic Dionne Warwick hits of the ’60s— Walk on By, Trains and Boats and Planes, etc.—which Burt not only composed but arranged and produced also. This particular song represents one of Bacharach’s rare excursions into the Latin idiom. Apart from sounding pleasantly authentic, it has that peculiar stamp of individuality invariably associated with Bacharach’s melodies. Ray Conniff’s beautifully voiced “wordless” arrangement, in which he has doubled female voices with trumpets and male voices with trombones, is a very fine example of the Conniff sound.
Besame Mucho
A strong Spanish influence pervades this enduringly popular standard, composed by Consuelo Velasquez and originally published in 1941. “Besame mucho”, literally translated, means “kiss me much”, so not surprisingly lyricist Sunny Skylar left the actual title intact when supplying the tune with English words. In August 1962, a series of celebrations in Guadalajara, where female composer Velasquez lives, marked the song’s twentieth anniversary. Many important recording artists participated in the event, which culminated in a grand climax at the Palace of Fine Arts in Mexico City. The melody, incidentally, is somewhat reminiscent of the “nightingale” aria in the Granados opera, ‘Goyescas’, but apparently Consuelo Velasquez was unaware of this at the time she composed it. For this recording, Ray Conniff has again applied his popular “wordless” approach to the arrangement and the overall “orchestral” effect is most satisfying.
Brazil
This marvellously evocative composition is perhaps the prototype of the successful Latin-American popular song. The original Spanish words and music to Brazil were written by Ary Barroso. The English lyrics were added later by Bob Russell. The song achieved world-wide popularity, chiefly through its appearance in the 1943 Walt Disney film ‘Saludos Amigos’. In this excellent recording, Ray Conniff’s crisply rhythmic arrangement utilizes Barroso’s original background figure (surely no arranger in the world would be foolhardy enough to try and alter it) and takes the melody at a slightly faster-than-usual tempo. In these circumstances, Ray wisely decided to dispense with lyrics and use the voices as part of the orchestra. The result is a truly superb version of a wonderful and much-loved song.

Side Two
El Condor Pasa
For this track, Ray Conniff has chosen to let the trumpets carry the melody while the voices play a supplementary role for the first chorus. But once the theme and mood have been clearly established, Ray brings the voices in for a sensitive rendering of Paul Simon’s haunting and philosophical lyric. The general mood of this piece is one of quiet reflection. The tune itself has a strong Mexican feeling about it.
A Taste of Honey
Here’s another beautiful song that has been heard to good advantage in various settings by artists of all types. It was, in fact, one of the standout songs on the very first LP by the Beatles. Top vocalists like Tony Bennett, Peggy Lee and Andy Williams have also shown a strong regard for this fine song. Now Ray Conniff, an ardent champion of fine songs, has joined the ranks with what is probably the smoothest version of all.
Spanish Eyes
Songwriting really is a funny business. For example, take this Bert Kaempfert composition. When he first wrote it, he originally named it Moon Over Naples and it achieved only a moderate success. But as soon as English lyrics were added along with a new title—Spanish Eyes —the song became a smash hit in America for singer Al Martino. Could it have been due to the lyrics, or was it because of the song’s geographical change of address ? Well, whatever it was, it’s
safe to say that this great Ray Conniff version will only enhance the song’s reputation.
Kiss of Fire
Back in 1951 this well-known song was a million-seller for singer Georgia Gibbs, but its melody goes back much further than that. Kiss of Fire was adapted by songwriters Lester Allen and Robert Hill from A. G. Villoldo’s El Choclo, a classic Argentine tango of 1913. This stirring modern arrangement by Ray Conniff evokes more than a hint of the song’s origins.
Temptation
This dramatic ballad, written by Nacio Herb Brown (music) and Arthur Freed (lyrics) for the 1933 Bing Crosby-Marion Davies film ‘Going Hollywood’, has been successfully revived in numerous versions over the years. As Bing Crosby himself once remarked : “I guess every baritone worthy of the name has had a whack at this one through the years.” Both Perry Como and Billy Eckstine notched up massive sales with their respective recordings of it. In this fine recording, Ray Conniff treats the melody with the warmth and respect it deserves.
Tico Tico
Just as Granada provided the perfect opening track to this special Conniff collection of Latin-American compositions, there could be no more appropriate tune to close the programme than this all-time Latin favourite. Its tricky yet infectious melody offers a strong challenge to the measured discipline of Ray Conniff’s orchestra and chorus. Ray’s dazzling arrangement keeps everyone on their toes and this brings the collection to a most spectacular close. Olé, indeed!