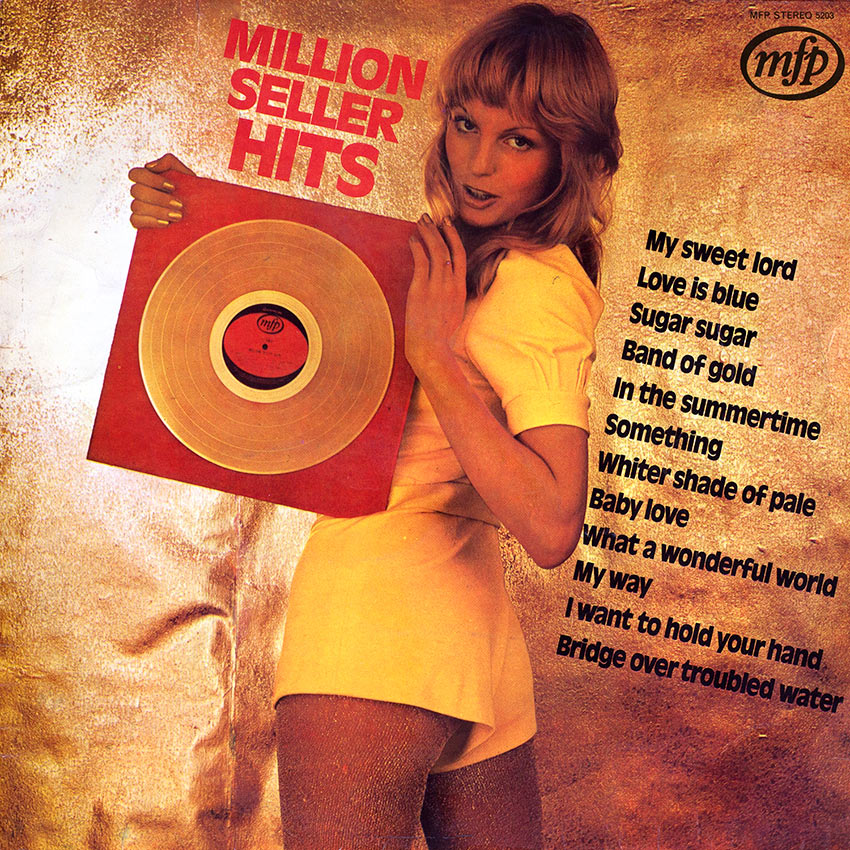 On this album are twelve unique titles. Unique, because each one of them has touched the nerve of an entire generation. Not just in this country, but right round the world. Most of them came from ‘ left field’ — out of nowhere. ‘A Whiter Shade of Pale‘,’ In the Summertime‘,’ Band of Gold‘,’ Love is Blue‘,’ What a Wonderful World‘, ‘Sugar Sugar‘, ‘Baby Love‘.

They took the world by surprise, and made overnight names of Procol Harum, Mungo Jerry, Freda Payne, Paul Mauriat, Louis Armstrong (as a pop singer already!), The Archies and The Supremes. Some of these artistes have never come up with another smash, but they will always be remembered for these brilliant works of ‘pop art.

Two other artistes found, in ‘Something‘, and ‘My Way‘, the key to a far wider audience than they had ever enjoyed before —Shirley Bassey and Frank Sinatra. Simon & Garfunkel, already with a great track record behind them, hit that elusive red button full belt with ‘Bridge Over Troubled Water‘, voted the best pop song for 1970—world-wide.

The Beatles hit the button so many times, with such incredible dexterity, that we can only say ‘I want to hold your hand‘ is, for us, the song that brings the whole, wild Beatle-mania hysteria back to life for two and a half ecstatic minutes. Lastly, George Harrison, the quiet Beatle. He has suddenly soared into his own with not only ‘Something‘, but the fantastic ‘My sweet Lord‘ as well.

A million-seller hit is a piece of pure 20th Century magic. That magic is compounded by the right song, the right singer, the right arrangement, recorded on the right day in the right place under the right conditions.

There is this sort of magic a-plenty in each of the twelve titles on this album—re-created here exactly in their original form. Play them, and live again the magic moments only a million-seller hit can bring you!

Another in a long line of “cover version” albums that were popular in the late sixties and seventies. never quite accurate enough to fool anyone into thinking they were hearing the actual hits but the effort made to get close was clear. Hear for yourself with this album’s version of “Whiter Shade of Pale” below.