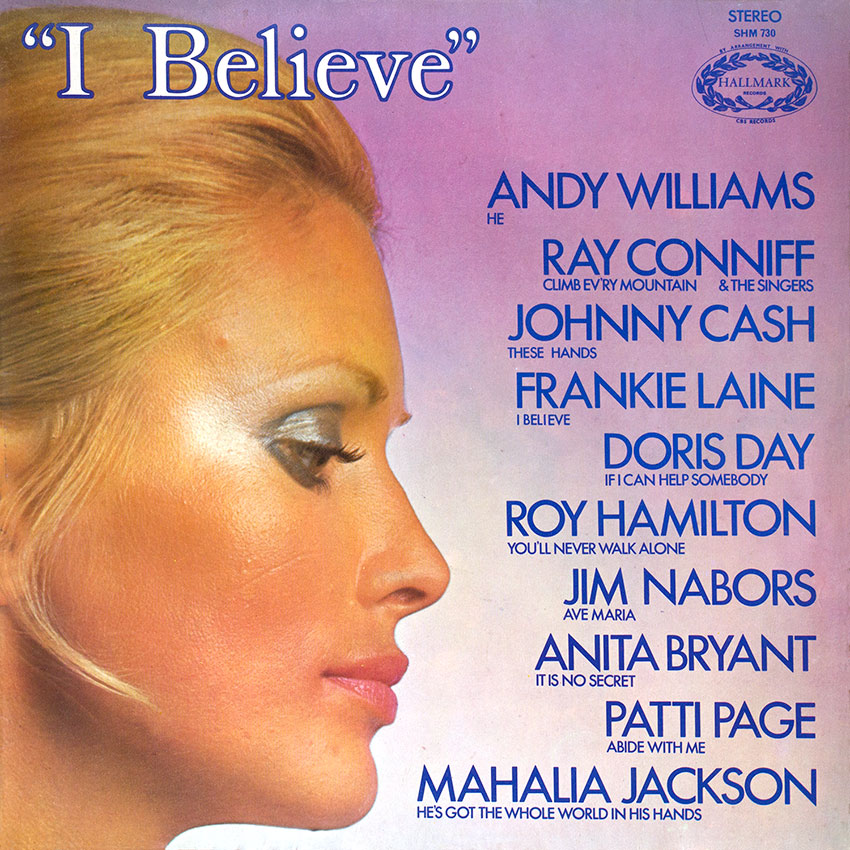 Frankie Laine – I Believe, Anita Bryant – It Is No Secret, Johnny Cash – These Hands, Doris Day – If I Can Help Somebody, Jim Nabors – Ave Maria, Ray Conniff & The Singers – Climb Ev’ry Mountain, Andy Williams – He, Patti Page – Abide With Me, Mahalia Jackson – He’s Got The Whole World In His Hands, Roy Hamilton – You’ll Never Walk Alone

A Latin scholar will tell you that the word “Credo” means “I believe.” A student of religious music will tell you further that the Credo is the third part of the Ordinary of the Catholic Mass, and that historically it was the last of the five chants of the Ordinary to be introduced into the Mass, something that happened around 1000 A.D. Measured in terms of human life, that is a long time ago, but the union of music and religious belief goes back much, much further than that.

Music and faith are a pair, one of the oldest pairs in the history of mankind. To understand this we must realise that for the earliest men music was not an art or an aesthetic thing, but a magical force. It was something a man learned to produce in order to satisfy a desire for expression that could be satisfied in no other way. And, conversely, he found that both the singing of music and the hearing of music affected his feelings, his actions and his life in strange and powerful ways. Some men believed that man and the world were created through song, and it was a natural result that the Creator was to be worshipped in song. A history of early sacred music, then, if it were possible that such a history could be written, would be a history of all early music. God had the tunes first; the Devil only borrowed them afterward.

In Western religious music – and here we are speaking about only the last thirteen-hundred years or so – there were two great watersheds, one Catholic, the other Protest-ant. The first is what is called Gregorian chant, a body of religious tunes that accumulated gradually and was codified in its definitive form in the seventh century. It takes its name from St. Gregory, who is thought to be responsible for its bringing together. Gregorian chant is purely melodic music. completely devoid of harmony. It is still sung in Catholic churches around the world, but it has an importance beyond that in that it was the source material for the multi-voiced religious music of the Renaissance and, ultimately, for much if not most of all Western music.

The second great watershed of religious music was the Protestant or Lutheran chorale. Produced during the sixteenth and seventeenth centuries, based sometimes on folksongs or chants, the chorales had a square-cut rhythmic character and strongly implied harmony. In this they were quite different from Gregorian chants and what came from them was a different sort of music from Renaissance masses and motets. They instead led to the cantatas and oratorios of J. S. Bach and other composers of the northern Baroque.

All later religious music, and that includes works by Beethoven, Schubert, Bruckner, Sir Arthur Sullivan, Richard Rodgers, and contemporary religious folk singers, is based, at least in part, on one or both of those sources. And while one cannot say that I Believe is founded on such and such a chant, or that Climb Ev’ry Mountain comes from the same chorale that Bach used in a cantata, it is good to remember that they are still a part of the same tradition. For the need and the faith that produced song centuries ago was no datable thing. The same need and the same faith exist today. The style of the music may change but the idea of it is timeless and everlasting.