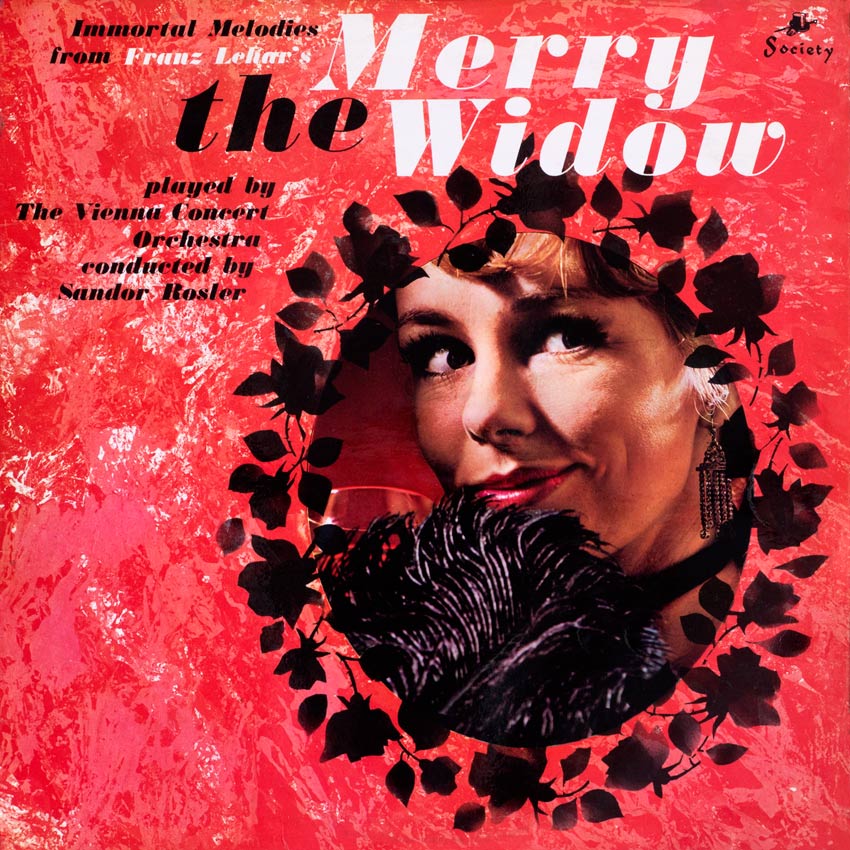 George Edwardes, the celebrated theatrical impressario who produced musical comedies at Daly’s and the Gaiety theatres (both, alas, no more), was faced with a dilemma in the early summer of 1907 when he wanted a new production for Daly’s. His last production had not lasted as long as was anticipated and with much trepidation Edwards decided to mount a Viennese operetta called Die lustige Witwe, written by a composer who was quite unknown to British audiences—the Hungarian Franz Lehár.

Edwardes, determined to do or die, assembled a very strong cast for this Ruritanian romance, including Lily Elsie, as Sonia, the widow, Joseph Coyne as Prince Danilo, George Graves as Baron Popoff, Marsovian Ambassador in Paris, Robert Evett, the Savoyard, who was allotted the role of Vicomte Camille de Jolidon, the rotund Lennox Pawle as the Marquis of Cascada, Fred Kaye as General Novikovich (Military Attache at the Marsovian Embassy), Gordon Cleather as M. de St. Brioche, and W. H. Berry as Nisch, Messenger to the Marsovian Embassy.

Rehearsals did not proceed very smoothly. The leading man, Joseph Coyne, loathed it, while Lily Elsie was certain she was unsuitable for the role of Sonia which, she argued, called for an opera singer. She had seen the Viennese production and it had produced many misgivings in her mind. She pleaded with Edward. to release her from her contract, for she was sure she could not sing “Vilia”, but Edward. insisted on her going through with it. , George Graves, too, was very disgruntled and said there was little or no comedy in his part. The arrival of Lehar rendered the position more desperate still, for Coyne had no voice. Edwardes pretended to Leith that Coyne was in the throes of a heavy cold and must nurse his voice for “the night”.

Lehár demanded a larger orchestra, but Edward. asked him to listen to the Daly’s Orchestra of twenty-eight players before insisting on this. The theatre orchestra was assembled and played like men possessed. Lehár agreed to an orchestra not exceeding twenty-eight players and took charge of orchestral rehearsals. Most scrupulous, he took three hours to obtain the proper effect for the opening bars of “Vilia” and the orchestra members responded nobly. Each member of the orchestra was separately rehearsed and at last the dress rehearsal was called. The cat was out of the bag. Coyne could not sing a note. Lehar was furious and stopped the rehearsal but Edward. smoothed things over and said everything would be all right when the great day arrived. The first night audience was in its place and Lehár took his seat in the orchestra pit, raised his baton, and “The Merry Widow” was launched. Lehár wrote no overture for the operetta, but added one later, and on the evening of June 8th, 1907, the curtain rose on a ball at the Marsovian Embassy in Paris after a few bars of introduction.

The story of the operetta was clear and well presented. Marsovia, a tiny Balkan state, was penniless. The country’s wealth had been acquired by a rich banker, and on his death it was bequeathed to his young and beautiful wife. He left directions that she might marry again, but in that case the country’s wealth would not revert to Marsovia. Baron Popoff, the Marsovian Ambassador in Paris, is advised that the banker’s attractive widow is shortly arriving in the French capital and he is ordered to prevent her marrying anyone but a Marsovian subject. All Marsovians living in Paris are—with one exception—already married. The exception is Prince Danilo, Secretary to the Embassy. He had been posted to Paris because of his entanglement with a Marsovian girl, of plebeian stock. The girl proves to be the banker’s widow and the fate of the little state of Marsovia is now in her hands. The widow arrives at the ball and soon has all the men round her. Danilo, who is also at the ball, falls asleep on a sofa, where he is seen by the Merry Widow. Danilo still loves the beautiful girl, not on account of her wealth, but for herself alone. He vowed he would never disclose his feelings to her. On hearing this the Widow determines to make him propose. He is equally determined not to do no and their relationship becomes rather strained. Later during the evening they are again confronted with each other. He asks her for a dance, but she refuses. He dances alone to the strains of a waltz, but before long she is in his arms and they dance together, bringing down the curtain on the first act.

The scene of the second act is the Marsovian fete, with the chorus dressed in the colourful costumes of the Balkans. Sonia arrives and sings “Vilia” and a little later comes the sextet, “Women! Women!”. Danilo still keeps himself in check, but with the strains of the famous Merry Widow Waltz the great moment arrives. In a determined effort to make Danilo propose, Sonia hatches a plot and Danilo sees her in Jolidon’s arms. Danilo fails to rise to the bait and the curtain comes down as he announces that he is going to Maxim’s.

The final act is set at Maxim’s, the famous Parisian restaurant. Danilo and Sonia are soon dancing together again, but the lovely young widow is unable to make the Prince propose. She throws bee last card by declaring “If I marry again, I lose all my money”. This alters Danilo’s attitude, for he cannot now be accused of fortune-hunting. He utters the words he has sworn not to say—”I love you”, and the triumphant widow tells him that although she will lose her fortune upon remarriage, it will—under the terms of her late husband’s will—go to her second husband. The Merry Widow has won her man!

Pandemonium reigned when the curtain fell on that first night, and the success of both Lehár and his “Merry Widow” was assured.
© Associated Recordings Company, London, 1964