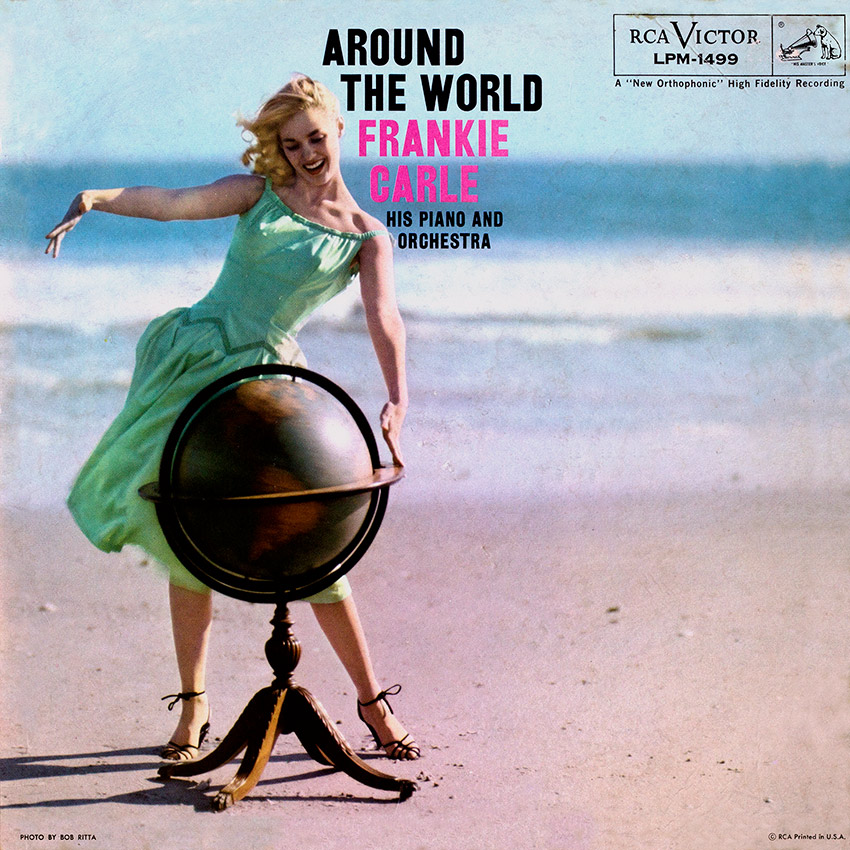 Attention, armchair tourists! Have a yen to travel? Then settle back in your chair and join Frankie Carle and his orchestra in a musical cruise AROUND THE WORLD. This high fidelity voyage begins on terra firma with an inheritable Carle interpretation of the American Patrol.

Next stop on our mental journey is Ireland and the familiar strains of Too-Ra Loo-ra Loo-Ral (That’s an Irish Lullaby). After a brief pause for a breath of air on yon bonnie banks of Loch Lomond, our tour guide. Mr. Carle, mounts his piano and orchestra on a passing Seine River barge and carries the stay-at-home-traveler Under the Bridges of Paris. With a Sailor Boy leading the way, we hop over to the Danube and Tales front the Vienna Woods, thence through a stretch of the imagination to the straits of Dardanella. Journeying southward to the desert, we spend several cool Arabian Nights before venturing to roman-tic India and the haunting refrain of Hindustan. Continuing eastward to the land of the rising sun and Shine No Yoru, we push on across the Pacific to Blue Hawaii. As the sun sinks slowly in the west and restless natives chant South American Way, we make the last lap of our voyage AROUND THE WORLD in song and return to the inevitable American Rock ‘n’ Roll. Sound enticing? Then settle back drop the photo-graph needle into place and let Frankie Carle and his orchestra carry you AROUND THE WORLD.
© Radio Corporation of America 1957

A blunted or chipped needle can permanently damage your most valuable records. A worn needle will impair the quality of sound reproduction you hear. Make sure your needle is in gaol condition before you Play this record. If in doubt, have it checked by your dealer—or buy a new needle.