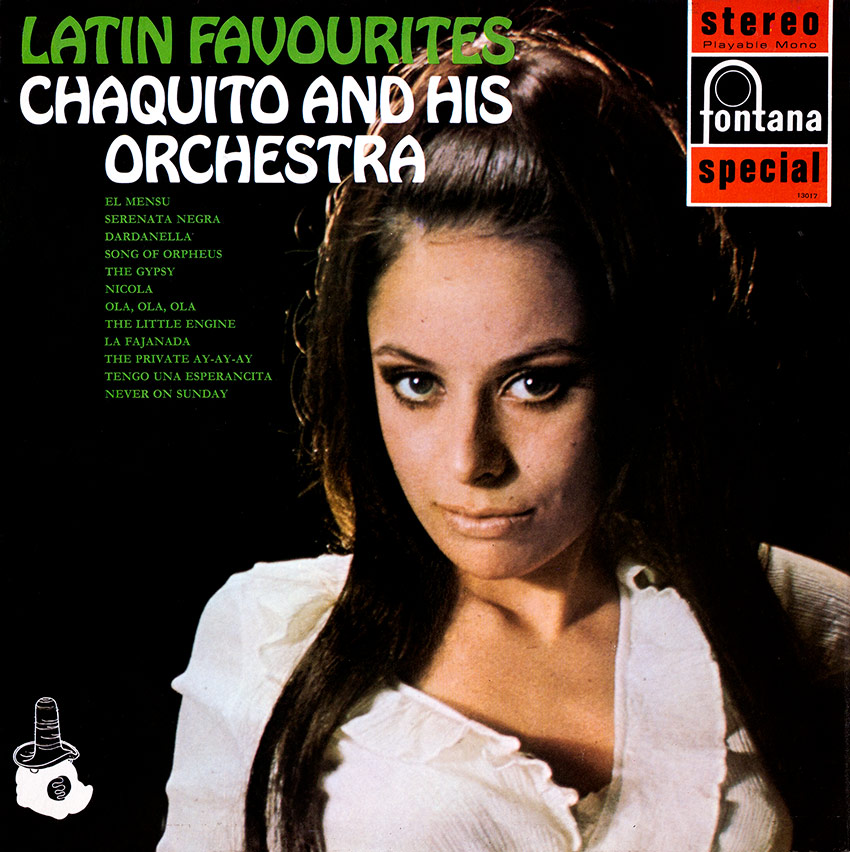 Here is another gem for the disc diadems of collectors of the Chaquito art. One that shines as brightly as all its predecessors, and one that reveals still more facets to the imaginative talent of this Latin gentleman.

Chaquito adherents are well aware by now that he has been in Fontana recording operation for over ten years, beginning in the first rhythmic flush of the cha cha cha dawn and continuing ever since with a scintillating LP string of instrumental Latin American pyrotechnics in the modern manner that bears comparison with any produced anywhere else, including Latin America itself. They also know he shows signs of positive response to the name of Johnny Gregory, too, and they realise he is an adept and active gentle-man over a vast range of musical territory from the classics to hit-parading pop, taking in film music, TV music, Gilbert and Sullivan, dance music and jazz between the two poles. But, being Chaquito adherents, they are especially interested when he wears his sombrero, dips his arranging pen in tequila, and scores the exciting Latin entertainment typified by this present selection.

They will realise with agreeable surprise that, as well as eight big band powerhouse tracks, there are four blending a twenty-piece string section and voices in a warmly successful manner. They will recall that strings are a speciality amongst the writing and arranging attainments of the man named Gregory, and they will surely welcome their inclusion in the Chaquito fold as a rewarding innovation.

The big band consists of the usual formidable five-piece rhythm section that is the constant, reliable basis for Chaquito’s musical magnificence, reeds and woodwind, and a brass section augmented by tuba and French horn for additional rich sonority.

This combination opens the proceedings with a turbulent presentation in the style of the Venezuelan joropo of El Mensu, written by the Argentine folk specialist and painter Ramon Ayala. This track packs all the potent Latin punch and ebullience of Chaquito, swinging like a belfry at wedding time. The woodwind and brass share the tune, there is some wild tenor-saxophone and trumpet soloing during the jazz interlude, and the
jumping rhythm section is sparked by some dazzling, rapid-fire timbales drumming from Barry Morgan. Serenata Negra introduces the strings and voices in cha cha cha tempo, with some solo vocal lines from one Miguel Sammes, and more neat timbales work rattling forth from Senor Morgan during the breaks.

Dardanella comes from the old New Orleans jazz bag, but get a baion showcase here as Stu Gordon’s rasping cabasa sets the rhythmic pace. Chaquito gestures respectfully towards New Orleans by means of a straight jazz passage before the chiming brass ring back the baion. A guitar cues in the strings and voices again for the beautiful Song of Orpheus from that memorable “Black Orpheus” movie award winner, and the heavy Chaquito brigade returns with The Gypsy, effectively featuring horn and tuba in its voicings. The first side ends with Steve Race’s outstanding musical tribute to his daughter as the woodwind, celeste, trumpet and cabasa combine to paint a very pretty picture that outdid the composer’s own recorded version at the time.

Ola, Ola, Ola rocks along infectiously, and then Stu Gordon gets up steam to relate the stirring tale of determined effort and its eventual award won by The Little Engine with obbligato “Choo choo choos” from the rest of the boys. The strings and voices make the most of Chaquito’s mambo variant (some say deviant) La Fajanada, complete with jazz piano break, Morgan timbales volleys, and a surprise ending. The Private Ay-ay-ay is a slightly sardonic tribute to all film and TV detectives by Chaquito and West End rumba bandleader Francisco Cavez, giving ritmoleros Jack Peach (drums), Denis Lopez (bongos), Barry Morgan (timbales) and Stu Gordon (maraccas) a chance for some violent exercise, plus some sky-scraping trumpet work from Stan Rodriguez. Tengo Una Esperancita reduces the temperature somewhat, paving the way for that famous number about the Greek lady of joy’s working motto, featuring the strings and voices once more. Another twelve tracks from London’s finest session musicians and Latin specialists, arranged and directed by a truly unique talent. It’s that Chaquito again without doubt.
NIGEL HUNTER