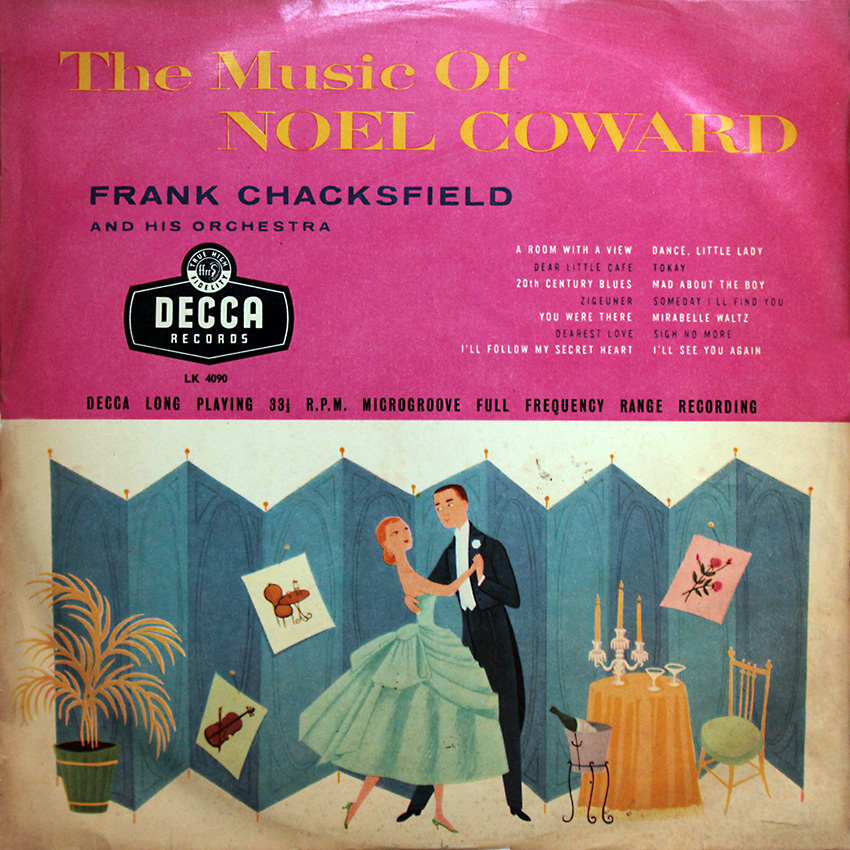 Noël Coward is one of those legendary figures of the entertainment world (Shakespeare a another, Oscar Wilde a possible third) whose legend, far from diminishing with the passage of time, actually increases with the years. Whatever critics may have said in the past (for Coward like, Shakespeare and Wilde, has had his near-failures too), the purely personal interest aroused by his name, the magic touch of the born artist seen even in lesser Coward, and the myth attaching to him, are so powerful that the box-office never has to close down on one of his shows for lack of customers – only for lack of seats. …

And that in itself is something of a phenomenon On superficial evidence it would he easy to say that Noël Coward established himself so firmly as the typical representative of one small part of the twentieth century, the riotous, sad decades of the ’20’s and ’30’s, which now seem almost as dated as the sumptuous plushery of the Edwardian Era, and more than that as the representative of one rigidly exclusive group of the society of that period, the Bright Young Things, that, with the decline and fall of the spirit of the ’20’s, Coward’s own star would have waned. In fact, it was predicted when his lyrics and sketches scintillated on the stage for the first time, that his brilliant success would be short-lived, and that when he passed the age for being a Bright Young Thing he mould degenerate into that very dreary bore, a Middle-aged Young Thing. But of course Noël Coward triumphantly, and with the polished ease with which he does everything in the theatre, proved his gloomy prophecy false. It had to be false because in the first place it missed the vital point that he is constitutionally incapable of being dreary, of being a bore, he his always, in every sense. entertaining. He fooled the prophets by catching, the effervescence of the ’20’s so well, the flappers and crazy parties and irresponsible gaiety, that they wrote him off as merely another clever young man. The clever young man showed, however, in his play “The Vortex”, and has shown since in works like “In Which We Serve”, The Astonished Heart”, and “Cavalcade”, that he could respond, none more sympathetically, to the spirit not merely of a decade and a group, but of a whole time, a whole nation. And although his own songs and satires hale a brilliant finish, a darling surface, they are successful because they penetrate below the surface. his sharply witty revue pieces Noël Coward created situations and people worthy to be ranked as small masterpieces: the four young men of The Stately Homes of England who knew “how Caesar conquered Gaul and how to whack a cricket-ball…”, the “toughest Malay bandit” pausing to ponder over the madness of Englishmen, and more recently the solid citizens, formidable in their mackintoshes, who forbade us to make fun of the Festival. But there is another side to the acidly serene mocker, the debunker admired even bu his victims that is more sentimental Coward, the troubadour, whose gentler songs – Sigh No More, Dear Little Cafe, Room With A View, I’ll Follow My Secret Heart, I’ll See You Again, and many more – are featured on this record. The fact that he has a gentler side, that he makes his appeal to the warm-hearted plebs as well as to the glittering debs, and that his songs in this manner are as beautifully executed as the verbal ingenuities of the revue pieces, ensures that the legend will never die. As id to remind us of his virtuosity, Noël Coward at the age when most men are thinking of devoting their energies to bumbling golf, has recently appeared in two new roles, that of the smart and wildly popular cabaret entertainer, and , boldest of all, the man who dared to make Oscar Wilde wittier, in “After the Ball”. But who could be more fitted to the task, when the world is wondering, comes up as sharp and suave and gentle as ever, to astonish us again? Frank Chacksfield, who guides us on the week-end tour, is now one of this country’s leading light music conductors. Records such as Ebb Tide and Limelight, the first record he made for Decca and which won him the “New Musical Express” Record of the Year award, have earned fro him a worldwide reputation. In America, in 1953, he was voted by the juke box operators in a nationwide cash Box Poll to have the most promising new orchestra of the year, a result justified by the magic of his latest recordings. He was born in battle, Sussex, and studied music from the age of seven, displaying an unusual interest in musical theory for a boy of that age. He learned to play the piano and the organ, passed the Trinity College exams, and appeared as a soloist at the Musical Festival in Hastings, by the time he was fourteen. At the same time he was deputy organist at Saleshurst Parish Church, near Robertsbridge, Sussex. He formed his first dance band at the age of fifteen, but his parents were against a musical career and he entered a solicitor’s office. It became a case of working all day at the Law, and working all night at Music until ever-increasing popularity convinced him that music was to be his career – a happy decision for his now international legion of admirers. the war broke out and Frank joined the Army in 1940. During a period of convalescence from an illness, he made his first broadcast from the B.B.C. Glasgow studios, singing songs at the piano. Transferred to the Southern Command Entertainments Section of the R.A.S.C. at Salisbury, he became staff arranger to the War Office show “Stars in Battledress”, and shared an office with Charlie Chester, both being demobbed on the same day. This led to a job with “Stand easy” at Blackpool, with Frank conducting the orchestra. later he became composer, conductor and arranger for the B.B.C., working with shows such as John Pertwee’s “Puffney’s Post Office”, the “Frankie Howerd Show”, and “Up the Pole!” he made his first record in 1948, and has recorded with, among many, Charlie Chester, Petula Clarke, Bill Johnson and the Radio Revellers. After many successful recordings he recorded Limelight for Decca in April 1953, and so the success story continues. So here is the Chacksfield Orchestra in its present full glory, with a selection of songs eminently suited to its style, and, we hope, to the listener’s taste.